Play as an uncontrollable egg. Roll, jump and chase your high score.
Submitted by tiwa — 5 hours, 15 minutes before the deadline
Add to collection 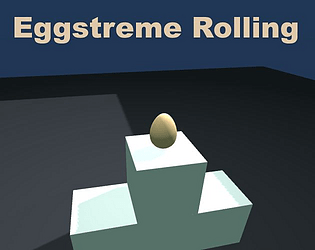 Game Description
You are rolling around as an egg and collect golden things to gain points.

Eggcilent! I couldn't stop rolling the egg. The graphics looks scrips and audio is very soothing.
The camera some times moves too much making it difficult to jump precisely, not sure whether that is intentional.

I had a lot of fun rolling around and trying to launch my egg up onto ledges! The one and only critique I'd offer is that I wish there was some way to manually control the camera.  Overall a very well done game, the controls were smooth, the audio was suitable, and I enjoyed my time spent playing it. Good job!

Loved the art and modeling!

Did you do all of that yourself?

The music and sfx also worked very well with the game.

Yeah i did everything myself. I used our living room as a reference to get the proportions right.

This was pretty fun to play through. I liked how wonky the egg felt as it rolled around. My critique would be that this game could use some camera controls. It was hard to lineup my jumps when the camera was facing the opposite direction. Also, sometimes I would just have too much momentum and end up rolling off the tables. But maybe I just need to spend more time learning how to be an egg. Anyway, good game!

I have to say that I quite like this and I usually don't like 3D games. The environment feels good and the egg rolls.... like an egg would. It was nice that you bothered to put in a tutorial level,  I actually missed the part where it was trying to teach me how to jump because I left tutorial level too early thinking it was over.  Oops. But space bar is a pretty universal key for jumping, so as soon as I realize I need to jump as an egg, that was the first key I tried. Sadly I didn't quite master jumping as an egg, I keep smashing into the wall instead of landing gracefully on the amazon box like I intended. But I was really impressed on how well the egg was holding up despite how many accidents I had with it. :)

Overall I thought sound was good, graphic was well-suited to the gameplay, and it was fun rolling as an egg.

Submitted
Carol of the Penguins
LikeReply
tiwaDeveloper270 days ago

Yes the sounds make it pretty responsive. I am glad you had your fun.

wow, really unique experience trying to drive an egg :)  I had a tough time getting the egg to go where I wanted it to (but I think that's part of the fun). I agree with another review that I got a pretty neat Katamari vibe. Definitely fun.

Submitted
Carol of the Penguins
LikeReply
sage7Submitted270 days ago

I've never been so afraid to break an egg!  Very good idea for the theme. I liked how easy it is to tell your level of health just by looking at your egg. One thing I would say is perhaps add more of a variety of collectable items - I only saw two different types I think (and they looked similar).

Thanks, i always loved this kind of maps in Counterstrike. :-)

I got ideas for additional powerup, but no time left.

I really like the idea of having to control an egg in a 3D platformer. Exploring a 3D environment as an egg, that sounds really fun. The environment looks simple but really good. The only thing I didn't like is the camera, it shows the egg in all kinds of weird angles and sometimes I just can't see where I'm going.

Yes, I should have made it easy to control with the mouse, I think. Thanks for trying it out.