A synth-wave inspired runner, made for the gmtk game jam.
Submitted by beeseekay (@beeseekay97) — 18 hours, 10 minutes before the deadline
Add to collection 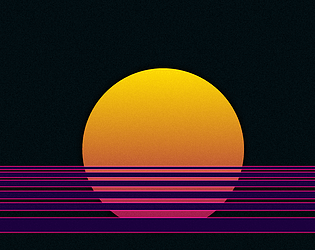 How does your submission match the theme?
Both running and jumping are managed by the energy meter, and letting the player charge their jumps mean they have to balance their height against their speed when making maneuvers such as quick turns or long jumps.

Small levels that teach basic mechanics/behavior one by one would be useful first, and then having the main level here be the last one to test your skills. Love the aesthetic though!

Challenging game! I included it in my Game Maker Toolkit’s Game Jam compilation video series, if you’d like to take a look. :)

Wow, it's really cool and weird actually seeing someone else play my game. It was interesting to see you figure out the way the jump and movement worked over time (it's supposed to be that you charge your jump with the energy and have to balance your movement speed with the force), but even without solid instructions that I probably shoulda included in the game itself you managed to figure most of it out. Also, I'm super annoyed at myself I didn't fix that flashing lights thing before the due time a lot of people are having problems with it (it's a bug on reloading the scene). Thanks for playing!

Ah thats pretty interesting - I thought the blinking was meant to be there. Im glad you got something out of the video! :)

It took a while to master the controls, but once I got hang of the controls it was quite a fun game. Would love to see a longer level. Also it would be neat if the game restarted more quickly after the player went off course. It can take seconds until the player lands so the game can restart.

I don't know if it is the visuals, the music, or the pace, but it feels really nice to play. I like how the level design seems to allow different roads. Fo the short time it last, wall-running on that loop was very cool!

Nice visual but hard to control as you have to use the space bar to jump, the arrows to turn and the mouse to control the camera.

Cool concept! I would recommend putting some kind of epilepsy warning in there through since when you die there's some really bright flashing. I like the idea of this game though!