Minimalistic 3D puzzle game with a die as the character
Submitted by Jakob Scharrer (@Tuhlienn) — 3 hours, 30 minutes before the deadline
Add to collection 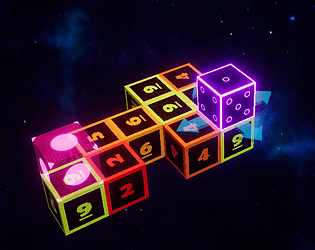 How does your game fit the theme?
The main mechanic is rolling a die

Loved the concept and the creativity that went into making this game !! Loved the simple art too, Great Work !! :D

I really like the colors and the game idea is also quite fun, good job!

A cool twist on the Bloxorz-likes. The mechanics are really easy to understand, the puzzles are surprisingly challenging, and the overall aesthetic is solid!

Really well made and I like the neon stye you went with. The puzzels were really clever and took me a few attempts:)

I had this idea too but i thought people will just make this so mine will be like a clone. But this was good and presentation was also lovely.

Nice, we used similar movement mechanics... but shooting projectiles instead of doing math :)

Very good game, I enjoyed it a lot, although I couldn't pass a level, it's very well done.

Submitted
Dice to the end
LikeReply
morriletSubmitted201 days ago(+1)

This was a really cool idea! I would have liked to see a way to view the side that the die is resting on, but being able to see through to the tile below it was a good touch. Because so much of the planning was based on the bottom of the die it sort of felt difficult to see everything. Maybe using the top of the die could have helped there? Either way, this was well-thought out and the presentation was really nice. Good work!

Submitted
Dice to Meet You
LikeReply
feraswheelSubmitted201 days ago(+1)

Interesting concept, it was a bit hard to wrap my head around what was going on, maybe a clear direction as to how to play in game would be great. but other then that, good job

Bit confused about the mechanic but it looks nice. I also enjoy music and sounds.

Very cool game, I like the concept alot, I wont rehash any other criticisms already here, but i love the transparent dice so smart! its so similar to mine!

Played through the entire game. It's pretty good!

I'm always a bit torn on this sort of dice-rolling puzzle. On the one hand, I like puzzles quite a lot, on the other hand, my spatial reasoning isn't good enough to plan that many steps ahead and I often end up stumbling onto the correct solution by chance. The levels were streamlined enough so that I could reasonably well figure out what to do at most points, though, well done!

I liked the aesthetics, though they could be a bit overwhelming at times. I would have digged some sort of crumbling animation for the falling blocks, maybe for a post-jam version.

Another nitpick: While the -1 and +1 blocks actually did what I expected them to do,

As for controls, while I really like how the die becomes see-through when you hover it, I think I would prefer controlling it with the keyboard. I read somewhere below that camera rotation is a problem, but with a bit of vector math, dynamic key mapping should be doable: When you hit a directional key, calculate a vector that lies in the camera plane and corresponds to the direction you've pressed. Then take the dot product of that vector with the four vectors the die could possible go in. The biggest value should be the one that the die will go in.

Submitted
Roll of the Dice's Cottontail
LikeReply
philly1084202 days ago(+1)

Looks good, mechanics are a bit hard to understand. . flashy and matching the board design instructions at the beginning explaining would have helped.

Very pretty, simple idea. Got stuck for a while on a level but figured things out in the end. I wish there was keyboard controls since the clicking on the direction for in the way of the visuals.

At first I had keyboard controls but the problem with that was, that there had to be a way to look around by rotating the camera. And when doing that, using the keyboard's buttons would mean any form of mental mapping as the perspective is changing.

Yeah, that makes sense. Being able to rotate the camera to see things is way more important for sure.

I liked your art! I will say that with all the colors it took me a hot sec to understand that the number going down made me go bye bye until I went bye bye the first time xD
If you'd like to play & review our game, we'd appreciate it.

I love the art style. The colors look very neat in the space environment

Hey! I had a similar idea but impressed with how you've solved this! :D

The concept was there in about 15 minutes and the core gameplay in about 24 hours. Was simple enough to be manageable for one programmer + one artist.