Thanks for playing, Tiger :) Great stream!

Not sure what's wrong, but I can't seem to get any sounds generated. I'm on win10 running rtpMIDI and both Orca and Cassetter find my MIDI port, but they don't seem to be communicating. Orca and Pilot communicate just fine. I've also tried the current build on GitHub to no success and 0.1.0 and 0.1.1. My guess is it's rtpMIDI's fault, but would love any suggestions

Edit: Nevermind, figured it out. Needed to use loopMIDI and not rtpMIDI for this use case. Hope this helps somebody else and thank you for the great software :)

I thought it was incredibly bizarre that there were so many youtube reviews for this game , but I wanted to know exactly how many.

I inspected the comment element in firefox and counted 65 matches. I took this into a text editor and filtered it down to 63. I then loaded this into Python because I wanted to know what the average view count was. As of this post, the minimum views were 5, maximum 731 and an average of 118. Here's the distribution: 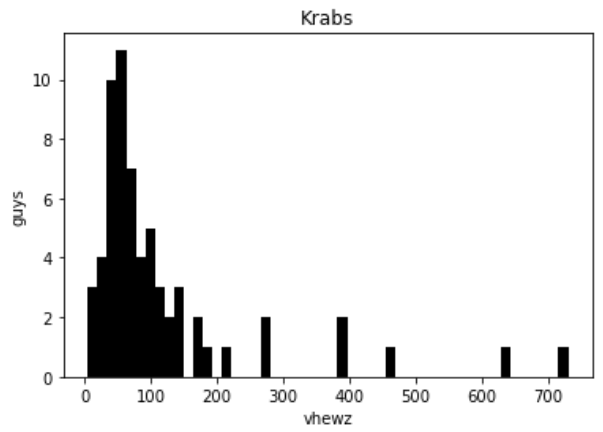 Not sure if this is a phenomenon exclusive to itch.io but I found it incredibly strange. I guess people are trying to become famous by posting video responses? Is it because it works? Did some big youtuber play this game and everyone's here trying to get second-hand attention? What's going on.

Pretty interesting idea! I really like the joined together requirement for the powerups, but wish there were more ways to maneuver the ability-granting pebble. I think this could get hashed out into something awesome

Thanks for this suggestion! I also noticed myself skipping my score by mistake since there's not really any forgiveness on the spacebar. I'll probably add a delay before restarting for future versions so you can get a look at your score.

Thanks for playing the game and thank you for the feedback! I guess I'll have to pilot some people and see which mechanism they find more fun. Thanks again :)

This was super fun! It felt like a re-imagination of snake with a puzzle element. This is one of the more creative submissions I've seen and I think it fits the theme perfectly. Well done!

I think the controls are a bit too chaotic, but I see what you were going for. Definitely would be more playable if things were more predictable. I like the stripped-down aesthetic and the concept, though

Overall I think this is pretty fun, but I wish it was top down or the camera was directly behind. This isometric/2.5D perspective makes it really difficult to know if you're going to clear an obstacle or not. Alternatively if you wanted to keep this perspective, adding a grid would make it much easier to see where you are and I think it wouldn't detract from the aesthetic. Good job though!

The bonus is you stay alive haha. If you're apart for too long the game ends as you've drifted apart. I think the current version is too generous with life so in future iterations it would be more clear that the heart is your life. Glad you found it challenging!

Fun game! I liked the aesthetics and I like that you've created an ecosystem where the survival of your dominant species is dependent on its food source staying in tact. I could see this idea being developed into a more polished game for sure!

Thank you! It seems like it glitches on Chrome, but I only tested in Firefox.

Wow this is a beautiful game and super polished. Really fun mechanics and levels; well done!

Really fun game. I t hought it was a bit savage that once  you've lost one color there's essentially no way to win since you'll just have to sacrifice all of your remaining colors until you die. Otherwise I thought the game was pretty captivating and very intuitive to play. Nice work!

Great aesthetic and cool theme. I did feel like I got wrecked by RNG a few times and it was kind of difficult to mechanics. Well done!

Cool concept for a game! I like the love theme (but I'm biased) and I thought this was a unique pattern matching game

That was a ton of fun! Great aesthetic, nice mechanics and fun levels. Well done!

Interesting concept! Controls were a bit weird to learn even with the tutorial playing in the corner. I made an invalid connection and turned on the power and the game crashed haha

Thanks for the comment! Somebody else also suggested a non-insta kill rock interaction. I'm okay with experimenting with the idea, but I do like the cruelty of insta death similar to Flappy Bird. I do think the game needs some balancing though and taking damage with intangibility frames may make it more accessible and overall more fun so I'll probably play around with the idea. Thanks again!

I really appreciate it! I was definitely going for the melancholic vibe so I'm glad it translated well :)

Just an FYI: The audio seems glitched when the HTML version is downloaded through the itch.io app. Sounds fine on browsers, not sure why there's a difference!

Interesting concept, but I'm not sure if it really adheres to the theme super well. Also the spawning is glitched for sure. I got to a state where the same rocket was being generated for like 20 cycles and there was no way for the bullet to blow it up. Also after the first few rounds the dynamite stopped spawning and the game just turned 100% afk since no bullet could hit the battleship. I think this could be turned into a really interesting, fast paced game!

This has been one of my favorites so far! Really fun mechanics and aesthetics. On 2-8 the button on the shadow side was underneath the UI and it took me a while to find. Not sure if that was intentional or not! I felt that the AI was a little too easy to manipulate and also I would have preferred to just take them out with a single shot just to make it feel a little more fast paced. I also noticed that if you shot the ghosts after they already died it would stall their death cycle (not sure if this was intentional). Great game, I could definitely see this doing well with a bit of polish and a new release!

Really fun game! All of my end level platforms were glitched so I'd just get to the blue square and press space. I found that the knight was just a bit too out of control, but it was still a blast to maneuver him around to slash enemies and dodge obstacles. Well done!

Really interesting concept! I thought it was funny the owner would just drag the dog while he was sitting and that he could move while sitting lol

Interesting game. I wish there was some time between the levels ending and also I wish I could just drag the pieces directly to where I wanted them from the sidebars. Also there is not a requirement to use the pre-placed pieces so you can just create your own custom, valid circuit to complete all of the puzzles haha. I assume this is a bug but personally it made it more fun

I liked the concept, but I feel like it was too detatched from snake. Part of the fun of snake is that the game moves at its own pace and I think that would have worked really well with this switching directions concept. Also some of my inputs were getting eaten and the web version never loaded and I had to download it.

You're not supposed to link to a bug fixed version as per the rules of GMTK21 btw.

I really liked the vibe of this game! Idk if it was just me, but sometimes pressing E would just eat my input and wouldn't actually release the blob I had absorbed. The mechanics were really cool and the puzzles were fun, great job!

That's an interesting idea, maybe I'll toy around with it, thanks!

Nice aesthetic for the game. I thought the spikes were a little too punishing but it calls for super precise movement and the mechanics are just tight enough to allow for it. Great concept!

Super neat concept! I like that there aren't too many hazards to deal with at any given time because it seems like this concept could get overwhelming quickly. Well done!

I appreciate it! That's feedback I've received from other people as well and it's something I'll fine tune if I decide to polish this up. I wanted to make sure each row pair was possible to traverse and found that having a slow draining rate was an easy modifiable parameter to guarantee that, but it's certainly not locked in yet. Thanks again!

Wasn't able to play since my girlfriend is currently away, but I like the aesthetics of the game. The glitchy music was too convincing and I thought my sound card was actually about to die haha. I think this game looks fun so I'll come back to it in a couple of days to give it a proper try and rating!

That was a lot of fun! Pretty challenging game but I really liked doing these quick maneuvers to blast the enemies. Solid aesthetic and the game feels overall good to play; well done!