Goo is getting everywhere -- gross! Use your robotic squadron to contain the biomass before it spreads!
Submitted by ChristopherGreeley — 2 hours, 26 minutes before the deadline
Add to collection 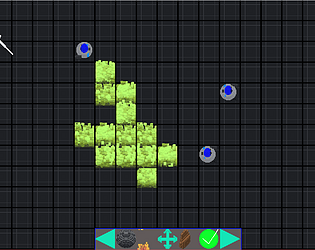 Have you participated in game jams in the past?
Global Game Jam

What stopped you from joining the official jam?
I was in it, my game got submitted (though it was late at first) but I wanted to do some bug fixes and add features, but wanted to set a limit for myself.

Will you be participating in the next GTMK game jam?
YES!

I kept lobbing nades at the last spot but the plant thing would not die. Interesting concept, also I have a soft spot for games implemented without a game engine, great job!

I sadly could not play the game. I get a runtime error.  "VCRUNTIME140_1.dll is missing"

Sorry about that, should work if you install the Visual C++ runtime https://www.microsoft.com/es-es/download/details.aspx?id=48145

Nice little game , reminded me of Human Resource Machine game. Would be great if the controls were assigned to hotkeys like qwer.

Thank you! I would have liked to implement the hot keys too haha XD

what game engine did u use ?

I didn't use one, I coded from the ground up in C++ using SFML, EnTT, and nlohmann JSON libraries

wow you must be a software dev

Hey there, as promised I tried your game too!

Interesting idea and seems like you did it with "hardcore" tech with SFML, so grats on that :) That brought back some memories of my first university projects! Some (shitty) games we had to re-implement with SDL and SFML in C/C++.

I like the visuals of the robots, the gas and the fire. It reminds me of some 90's games, like from Sierra Entertainment!

Quick question, is the gas "intelligent" and tries to aim at the robots or is it purely random-based?

## Improvements I would make (for next times or if you plan to continue this game):

1. if something does not work like AT ALL, it's usually better to just remove it. It would ook more pro and well-crafted. Cognitively the user feels less lost because he sees only the options he actually has, the interface gets cleaner, less bloated.

3. The robot movement animation is quite slow. Also, there is no indication of range.

4. To make the gameplay more dynamic, you could process the new turn when you use a command instead of the greenmark check.  Personally I would love it if it were pseudo-real-time with turns being processed every 2-3 seconds or so. And maybe change that time dynamically near the end to give a stressful feeling!

This one is a fundamental design choice, it's more of a personal taste and depends on what kind of feeling and user thinking you want to bring.

- My system's mouse pointer shows up on top of your "commands" sprite, and some of the commands sprites are not centered on it. So here if it were invisible as it should, then I would think I had clicked on the box to the right. If you resize to fullscreen (to 1080p), it's far worse 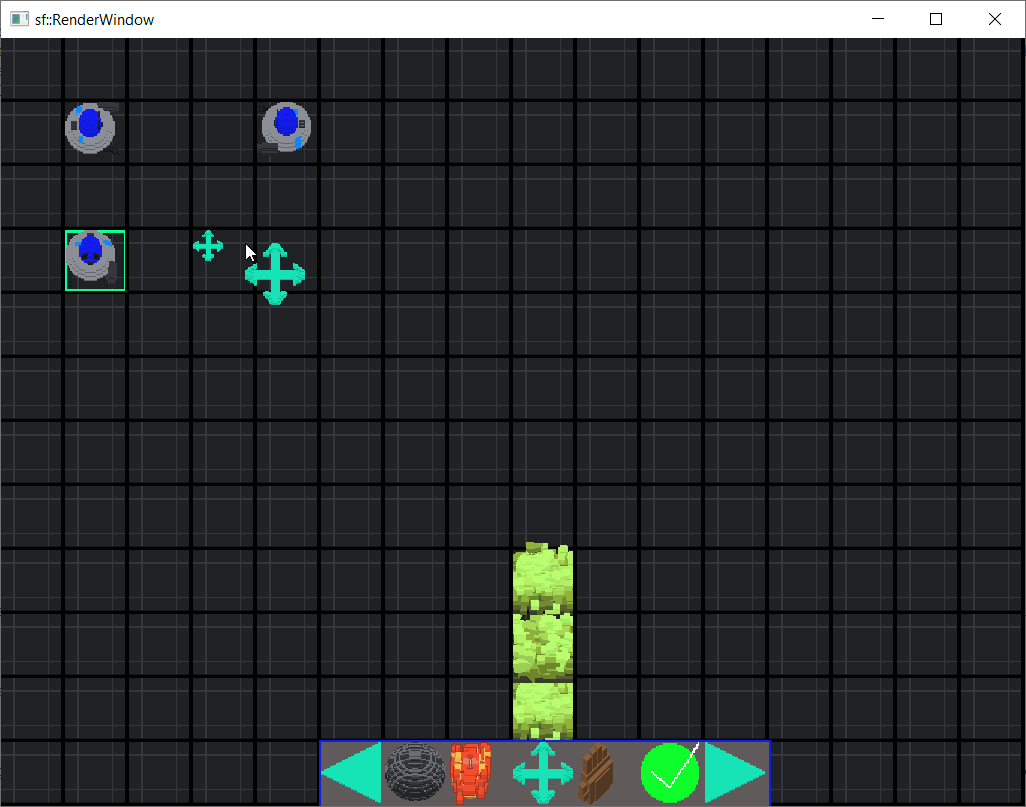 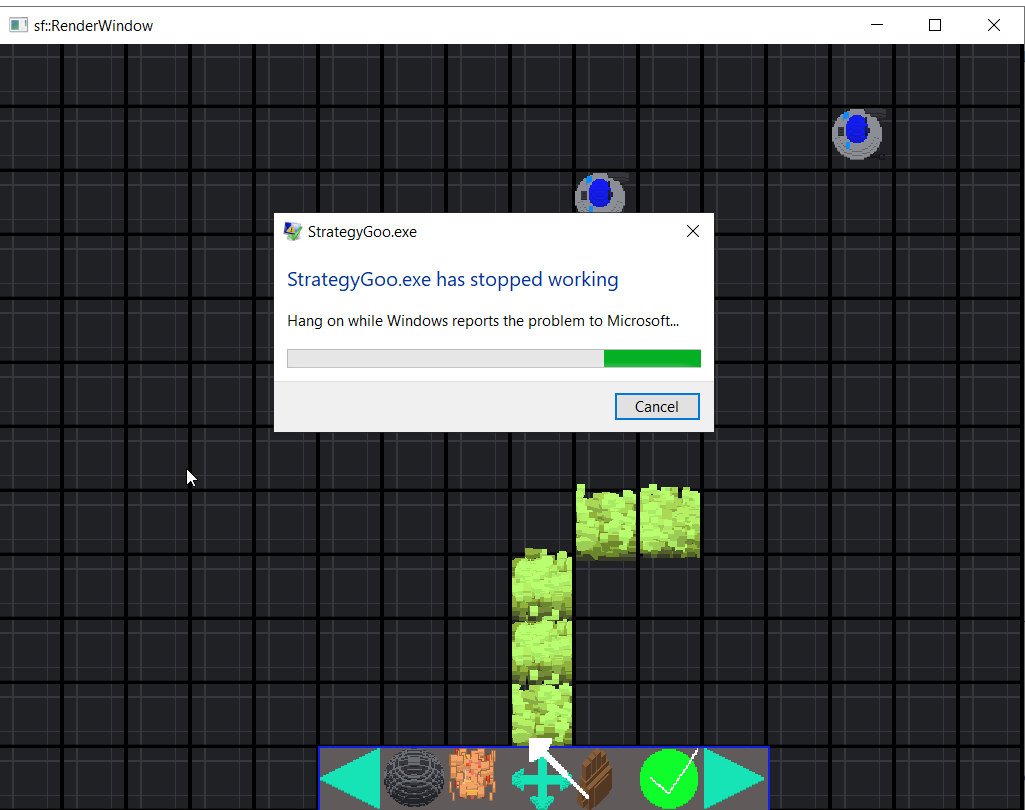 Thank you so much for your detailed feedback!! I really appreciate it!

I think you are very right with pretty much everything you said. I just didn't have time to implement most of it or even take away features. I only spent about 4 hours on this jam (spent about 36 on GMTK), and I wish I spent a little more.  For #1 I probably just shouldent have put them there in the first place if they weren't implemented haha, lessons learned.

For #4 are you saying that each unit should have its own turn?

I do know about the pointer, I started out using a sprite that follows the cursor and didn't see the sf::Cusror class until later haha, by the time the deadline came up I didn't have time to make the switch. Probably should look up a library feature in like that in advance next time.

I did get a crash while playing once after the jam, it was in the release build and I unfortunately have no idea what caused it. Thank you for the report and screenshot, it may be helpful!

Thank you so much for your detailed review! :D

You’re welcome :) I’m aware you probably knew about most of it and you lacked time. So did I with my own game haha :p

I’m also submitting it to Godot Wild Jam #23 (a monthly one-week long game jam only in Godot Engine), so I’ll probably fix some of my shit, like rewrite the AI from scratch using a proper Finite State Machine. That was like the first TODO comment I wrote at the very beginning, and I should have spent more time on that very important piece of abstraction :D

I also want to test Godot’s pathfinding/path-tracking helpers with Navigation2D and their already available implementation of A star.

For #4 I did not have so much of a precise idea, I just gave a few pointers:

For those last two ideas, since it’s real-time, you really need good and efficient UX.

You can pick one idea, combine multiple, discard all of them, come up with your own… I’m just brainstorming here :D As I said, it’s a matter of what feeling you want to convey.

I think the best skill for game jams (and hackathons in general) is knowing your limits and how much you can push them. And for that, you need as much jamming/hacking experience as possible!

Also you can add me on Discord VikFro#4956 if you prefer! I’d be happy to give you feedback whenever you need. By the way I’m looking for other people to collab with for other jams. I’m trying to build a community of indie hobbyists throwing ideas and helping each other!

No obligations of course, but I feel like it’s the best vector of motivation to keep working on pet projects :)

Actually I was thinking of taking part in the godot wild jam as well (seems like we both like real time strategy games, maybe we could team up?) either this or next month.

For this I kinda was taking a more Turn Based Strategy approach like Civ or XCOM (despite the fact that an RTS may have been a bit more "out of control" haha). The goo could have been implemented a bit better with a dynamic procedural generated texture and I did consider that. I kinda like the idea of a timer, a bit like BSG deadlock?

Sent you a friend request on discord!

Hey anyone looking at the game! The instructions on how to play are here, and I am also going to copy/paste them here https://christophergreeley.itch.io/bio-goo-containment-squadron

Special Credits To:  Varuns who made the cool and explosion goo animations https://itch.io/profile/varuns check out his submission for the jam! https://varuns.itch.io/dinoeatshorsemaybe