You are a prisoner of the king, and you must FIGHT TO THE DEATH!!!!!
Submitted by studio-19
Add to collection 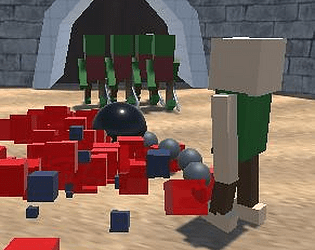 How does your game fit the theme?
The ball is joined together with the player

I had a lot of fun :D , I would have liked there to be a score to show how much I got haha

Really fun to play and excellent presentation. I would love the chain to do damage as well.

Cool machanics and fun to play. Was glad to see the magnet dudes since they appeared about when I was thinking to myself that it would be nice to see some new challange :D

I think this would make a really nice mobile game. I liked the smash effect. Felt satisfying. Great job.

Pretty nice ball and chain controls. I do agree with others that it was too easy, I could just spin around in circles and never get hit. I didn't like how the game froze or slowed down whenever I hit an enemy, it made it feel very laggy and made me not want to hit them.

I really liked the model and textures of your characters, and I had fun with the gameplay! I like that you added SFX that suit very well (except the dash, kind of goes out of the style and it's a little bit annoying to hear). Very well done for the 48hrs Jam! I hope you expand this game and add a variety of enemies, like ranged ones, and give a better balance to it (Too ez rn). In general great game, I enjoy it a lot (:

Way too easy, the game feels juicy though, but there's no difficulty almost at all.

Ball physics feel pretty good and the hit stop, screen shake, and sound effect on impact added some nice feel. Gameplay's a little too easy, enemies are slow and only walk towards you - more enemy diversity or movement patterns would make things more interesting.

Fun game, really liked the concept! I'm not sure if it's just me but the how to play instructions were a little bit cut off in the resolution, but otherwise a really great game, well done!

Neat! I really like those particle effects and those sound effects plus the extra "pause" really sells the "hit" and makes it satisfying to accomplish. I just become a hurricane of furry to survive! Question...how does the king have an army of walking dead and how has the kingdom not been overrun by them? :P

Nice job, I ended up doing a wrecking ball mechanic too lol.  I think a bit of diversity on the enemies so you didn't just kite them into a big circle. I also spent much of the time just waiting for the next wave to spawn. Loved the juice and hit pause on the kills!

Nice amount of game juice and the hit particles and sound effect are very satisfying, the screech from dashing is not very pleasant though. A nice addition would be some form of interaction other than swinging the ball, to motivate the player to avoid constant circular movement.

That's an unusual way to fight enemies! Good concept but i would have liked to see more diverse gameplay or some goal here(or maybe it was there but i just couldn't reach it)

Great game idea and gameplay! I really like the prisoner/chain theme, it adds a lot to the fun! Great job!

Awesome work! Very nice to see a 3-D version of the same game I made :P

Nice one! Quite fun to play against friends too, comparing your scores lol. Shame I don't make it to the magnet zombie :(

Feedback from me is about the camera shake. It is a good touch indeed for having it but I think it's too much shake. Maybe consider lessening it a little bit. Good work!

its satisfying to try to get as many zombies as you can. The zombies holding magnets was a nice switch up. Well done !

This was a super satisfying and fun game! The mace-like mechanic for combat makes for some really fun physics, and you've got some excellent game juice going as well. You used plenty of screen shake and particles, which really adds to the game's polish. The movement is snappy, and the models and textures look really good and fit the game's aesthetic.

Some things I would like to point out is that if I defeat a wave much earlier than anticipated, then I'd have to wait until the bar goes down before I fight the next wave; gameplay would be much smoother if you make so it immediately transitions to the next round if you kill the wave before the bar goes down. It would also be nice for the beginning enemies to have at least two hitpoints, mainly because I think it would be funny to add insane knockback with the ball and chain. There also seems to be a slight bug where the camera slightly shifts when the screen shakes.

Overall I really like how this one plays! Hope this one does well!

This is a nice, simple, and satisfying game! I did not make it to the magnet zombies that noticed others have mentioned (mostly because i died lol), having them come out earlier so player know there's more variety might be a good idea! There were some issues with UI scaling, when I wasn't full screen, a good portion of the text was cut off. I'm not sure exactly what the smash button did, as I had an easy enough time taking out waves with just spinning, but I didn't really need it, the spinning was satisfying enough on it's own. I imagine this would work pretty well on mobile, as the spinning would translate pretty easily. Well done!

Very satisfying to smash the enemies!