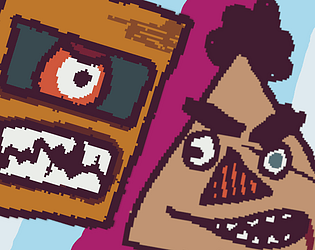 How does your game fit the theme?
It is a fighting game where the fighters are permanently stuck together

Hahaha, I love this idea! It was silly and fun, and fit the theme very well! Great job!

Submitted
The Doggo Of Us
LikeReply
ProdigalSon GamesSubmitted1 year ago(+1)

Are those Doritos chips breaking when I win? lol At first I was scared by the button configuration but after selecting AI and Easy peasy lemon squeezy I was not so terrified. :D I thought it was going to be a lot of: single hand punches, headbutts, and jumping in the air to try to smash the others head but what I got was something very different :P

There have been a lot of games where you were bound to your allies, but this is one of the few that joins you directly to your enemy. The AI difficulty levels were a nice touch. This game has a simple concept, but it was executed well--I could see it appearing on some game site like Nitrome back in the day!

I think the game could use some more depth, though--after a few games, you've experienced most of what the game has to offer. Maybe there are other minigame ideas you could implement with the features that are already present (like a co-op climbing/jumping minigame)?

This is a cool idea! The controls were a bit difficult to get the hang of but it was fun and felt good to win!

Submitted
Turtles All the Way Down
LikeReply
Rise2waySubmitted1 year ago(+1)

Love the crack sound when i won LOL.

Simple QWOP style game but fun. Im not sure how the game fits the theme but great work for a 48 hour jam.

Please take some time to check out and review my game.

It is very satisfying to win. I tried the three levels of difficulty and the hard one is the best. I found a way to win, which is by kneeling with both legs (u &o) and right when you are at the floor stand up with both legs (i & p). I didn't have the chance to try it with a friend, but I will do it, it seems to be even funnier that way.

This game is a lot of fun! The art is great and so is the gameplay!

Unfortunately the wall-of-text tutorial and controls made this quite hard to play, but after a little while I did manage to get the character to flop around and do something. Seems like this would be quite funny to play with another player! Unfortunately I couldn't.

Please check out my game, if you get the chance! :)

Really liked the idea! Controls are a bit messy, but i guess that's the point haha

This reminds me a lot of that one two-player game called "Wrestle Jump", two Mexican wrestlers jumping until one of them hits their head or something xd. I did enjoy it, bet my younger self with friends would too!

I thought it was interesting, the limbs were fun to play with and I won! Although honestly, I wasn't sure why. Great work though!

Interesting game! It reminds me a lot of QWOP. The art style really added to the aesthetic.

I was so confused my entire time playing it but really enjoyed it at the same time. The controls were so weird and hard to master, but a part of me found that really fascinating. The hand-drawn kind of aesthetic is a nice change from all the pixel art from other entries, and I think it ties really well with the music and gameplay. Good job!

The controls are jank and I love it. It really increases the tension as I furiously spam U/O and I/P trying to get the jump in on my opponent. The gameplay reminds me a lot of this old Miniclip game called Wrestle Jump, which I played a lot back on the primary school computers. I don't have a friend with me right now to compete with, but I imagine it to be quite fun as well.

As far as presentation goes, I think you nailed the art style. The characters, even with static textures, felt like they wanted each other dead. Honestly, the only downsides in this game that I can think of is that the controls menu is a fat wall of text and could be simplified, and that the game might start to feel a bit repetitive after a few rounds. The latter is mitigated tho with the addition of AI levels, which I found to be a nice addition. But overall, this was fun to play!

Thank you for the kind words! I haven't played that game myself, but you are seriously tempting me to try and dig it up on Flashpoint and play it :D

Good point re: the controls list (our background is in making text games if that explains it ^_^). Probably a visual diagram would have been easier to parse and a better explainer.

Awesome game! I love the art and the overall concept of the game! I was a bit confused on how the controls worked at first, but later got the hang of them. Really nice work!

Thanks! The controls are definitely confusing, which I hope is part of the charm :)

A kind comparison! Thanks!

Sweet ballet of death!
This is a masterpiece you have created! Can't wait to try it against a person, but so far its been smashing dunking the AI every time!

Love your art, it shows grit and goofyness!

well done! I thoroughly enjoyed this!

We're so happy to hear you enjoyed it - hope you have a chance to vs another person! the two of us made it together but kept getting distracted trying to beat each other