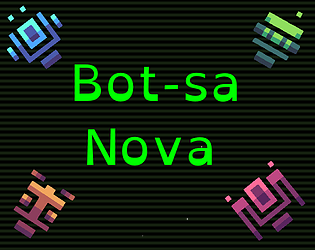 How does your game fit the theme?
You connect directionally impaired robots to combine their movement capabilities, and get them to the goal.

It's such a fun concept, I really liked it!

My only complain is that robots should maybe have an visual indicator that shows in which direction they can go, instead of a fixed skin that repeats over the levels, but with different controls.
I found myself moving a robot in the wrong place so many times, just because the same robot in the previous level could do different moves.

Other than that, it was really fun to play! Very good job!

thanks for the feedback! we planned on having much better indicators but time constraints made us rush it. check back a while after the jam as well be adding to it

Nice concept !  I like the sound design, it's really good

Thank you so much! All of our sound and music were made by Jan Seidel, check out his soundcloud if you want more of his jams

Cool concept! I found myself being a bit confuses as to which robot can do what movements though (even though it is shown on the screen on the left). Maybe having a small indicator on each robots head – maybe like a little 4-way crown of LEDs – indicating this would be helpful.

That was our idea too, but harsh time limit tword the end made us simplify it unfortunately. we were thinking for fixing it after the jam, adding an overlay of how they can move with the tab button or something

wow, I came here because of the title as a half-Brazilian lol and i'm glad i've played it. I enjoyed it  a lot

Fun game! Artwork is done right, and music is fitting. I really enjoyed this game!

We tried to make it as relaxing and not aggressive as possible to mix well with the sit-there-and-think puzzle gameplay. if you like that, Jan has made way more music on his soundcloud, you should check it out!

Really fun game all way round, with a nice degree of polish interesting level design!

Music, art and gameplay are on point. The puzzle design especially was top-notch!

Wow thank you! can you believe it was my first time trying to make puzzles? after the jam, ill be making way more

Also, the music is amazing!

And, of course, the art and animations are great.

Aww hey, thanks for playing our game too! My teammates really hit the ball out of the park with this one. I'm proud to have worked with them!

Cool, very innovative and clever puzzles, with nice music and mood too!

Thank you! Yeah, that's just another unfortunate bug we didn't get to fix before the deadline. Thanks for the feedback!

Wow, exceptional puzzle design, love the sound and the whole aesthetic too, I really want more of this. Good luck coming up with idea for more levels, awesome work! I have so much fun figuring out the solution! :)

Thank you for the kind words, glad you enjoyed it!

This was a really fun one! I was a bit worried when I saw that the basis was once again two characters being linked together, but it turned out to be very inventive in how it applied the concept!

Thank you, and yeah that is definitely a common theme throughout the Jam I'm noticing, ha ha

Nice! If there had been more levels, I would have continued playing, nice puzzle game, really good job!

Wowowow would play this game and stay on levels just to jam out to the music this was awesome!!! The art is impeccable and the puzzles were really well designed and challenging, but not impossible! Felt very rewarding when you beat a level! Great job!

Thank you so much! Jan did a terrific job with all the sound and music. heres a link to the other work hes done: https://m.soundcloud.com/janseidelmusic/sets/game-music-demo-reel?ref=clipboard&p=i&c=1&utm_source=clipboard&utm_medium=text&utm_campaign=social_sharing

I love every aspect of this game, I love some of the clever tricks you have to use to beat later levels. the music was fun to listen to. Overall this is a game I'd totally download on my phone

Thank you, glad you enjoyed it!

Very polished, and the puzzles were challenging but doable, which is ideal.  I enjoyed it a lot!

Submitted
You Are a Strange World
LikeReply
StrivenStudioSubmitted165 days ago(+3)

Submitted
A Pearl in Abyss
LikeReply
JoshuaPelicanSubmitted165 days ago(+3)

A wonderfully designed puzzle game. Much more unique than simply multiple dudes moving at once, but instead having controls linked to different bots. A few things to note: I did get a white screen soft-lock when resetting one of the later levels. Also I kinda expected the same bots to have the same functions in every level, but they were mixed, which is fine, just not realized at first. Great work on the sound and visuals.!

Yeah, we missed that white out glitch before exporting unfortunately. Thank you for the kind words though, we're glad you enjoyed it!

Music is the best. Such sweet, chill tunes. I also liked the art a lot and the puzzles were nice. Great job on this one!

Thank you! Jan was a great musician to work with, you can find more of his work here if you're interested! https://soundcloud.com/janseidelmusic/sets/game-music-demo-reel

Thank you so much, this means a lot to me

Nice puzzle game ! The art is really cute and the concept is original.

I enjoyed the changing controls, but the robots are a bit too similar to be easily distinguished. Maybe, the color of each icon of the left menu could use the color of the corresponding robot ?

Submitted
Must Dwarves Together
LikeReply
EraserLarkDeveloper165 days ago

Thanks for the feedback, glad you liked it!