Made for the 2020 GMTK Game Jam
Submitted by RZaga (@TravellingSqua1) — 8 hours, 14 minutes before the deadline
Add to collection 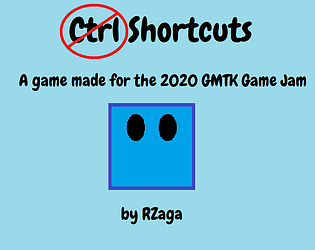 How does your game fit the theme?
You solve puzzles by using keyboard shortcuts, except without the use of your control key (hence "Out of Control (Key)"). To fit with the theme more, the goal is your control key that has gone missing, and various screens have representations of the word "control" crossed out

The mechanic is really fun and satisfying once you figure it out! I did find the puzzles a bit easy, but that's totally understandable for a game jam (Mark actually said he prefers easy games for this).

It's a charming game that has a good way of introducing challenges to the player. It's just a shame its so short. The music and art are both very simple, yet inviting. The dancing rogue CTRL key is funny little touch. The idea is good, and executed well, although this game never went too ambitious with it. In the end, I found this game easy to get playing, and it was fun.

Really cool concept, very good idea. The controls take some time to get used to, but it's a lot of fun. Well done!

Really cool interpretation on the theme, I thought it was very original. The first couple levels were good on introducing the concept. Although, I got a bit confused at first on 'X' to cut, since I would expect it to cut instead of delete :( I would love to have more complex level and maybe limit the amount of copy and cut to make it more interesting. Overall, this is a solid game. Great job!

This was my first time trying puzzle design so that's why the levels weren't that complex. Thanks for the feedback and thanks for playing!

A pretty simple game, but I think its literal interpretation of the theme is nice! Gotta say that many times I ended up confusing myself, since Cut is essentially used as Delete, and I'm used to the keyboard shortcut both copying and deleting. Not sure if it's a bug or a feature, but thought I'd share my play experience. Sound design is pretty good, overall nice work!

It's a feature haha. Didn't know that cut also copies! Thanks for playing!

very basic game , art could have been improved in the future , well done :)

Thanks for the feedback and thanks for playing!

The audio isn't particularly enjoyable and the art is extremely simplistic, but I find the overall copy / pasting mechanic to be very well implemented, quite original and having good puzzles made out of it.

There is a lot more that could be done with this idea and some tweaks and polish could make it a must-play, good work!

Never been good at art and music so that's why they weren't great. Thanks for liking the concept and thanks for the feedback!

The music gets annoying quickly but good job on making it yourself, A for effort. I took the lazy route and used some pre-made music, lol. The puzzles are fun, but I agree with other people's comments that the Cut command should also Copy to the clipboard.

I've never dabbled into music too much so that's why it wasn't good haha. Also yeah I didn't know Cut also Copied. Thanks for playing!

Really great idea, the levels are a bit too simple right now but that's expected from a jam game, well done.

Nice idea!! I keep forgetting that cut in this game doesn't work like in a compute (cut also copies) hahah very fun!

I didn't know that cut also copies haha. Thanks for playing!

This was a very good game.  I would love to see your character saving the facing direction instead of always facing right unless you press down+left.
Other than that, I was engaged through the whole game and would have happily played more even if it were longer.  I think would be a good game to keep developing post jam. Great job!

Thanks for liking it and thanks for the feedback!

There's a good puzzle game concept in here. I was surprised that the ctrl commands didn't map to real life equivalents. (For example, why doesn't CUT store the object to the clipboard. Why does PASTE remove the item from the clipboard). I wonder if it actually would have better to NOT refer to the keyboard commands and just call them 'pickup', 'drop', 'destroy' etc.

Submitted
Out Of Control Flow
LikeReply
RZagaDeveloper2 years ago (1 edit)

I normally see the clipboard being used to store stuff that you copy. I didn't know it stores cut stuff too.

Also I'm aware that pasting something doesn't remove the thing from the clipboard. I just made it like that so a player won't get to repeatedly spam blocks or something.

I pretty much just made them named like the keyboard shortcuts to fit the theme. I have already planned to make the game in a similar fashion to what you suggested (not making it related to keyboards and stuff).

Thanks for the feedback and thanks for playing!

What a neat puzzle game!