Regain lost abilities and leave the castle.
Submitted by AriBaa Games (@aribaallc) — 9 hours, 58 minutes before the deadline
Add to collection 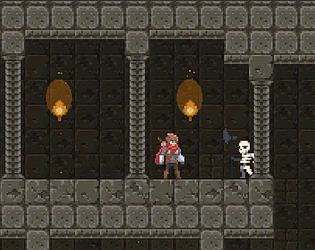 Lovely graphics! I included it in my GMTK Game Jam 2019 compilation video series, if you’d like to take a look. :)

cant slice while running or jumping nice art though

Something about the simplicity of this is really great. It played great for me, I thoroughly enjoyed it.

Considering the "completeness" of many of the other entries I've played, I think you managed to get quite a bit of content in for a Jam level game.

The theme was "game design".   To me, this hit all the elements.  Good background music, nice sprites, the attack sound on the weapon and the sprite arcs made it feel like a powerful attack.  I could see how if this were extended into a full flegged game, it would be fun to play and it managed to draw me in just with the existing content.

I don't understand where the "only one" thing is in your game. I looks good, but plays terribly. Not to mention it crashed two times on me.

The character is floaty and slow. The camera is static and it's difficult to see ahead of you. There is no use for the attack besides activating the switches. As for crashes, you have to test the game outside of the editor and let others play. The developer himself is usually a very bad tester.

The art is nice, one of the best artstyles I have seen in this jam so far, but this jam was about gamedesign, not visual art design.

You don't seem to be open to criticism. You make excuses instead of straight up accepting it.

I was never expecing a polished game, but I was expecting a playable game. A game crashing is a no go and it is unacceptable that such a fatal error made it into the release. You can't just ignore that and blame it on the engine. You could have asked your family and friends to play your game and give feedback. If you don't find people online to test your game, ask people you know. It isn't that hard.

Excuse me? Why would I fix bugs of a game I am not invested in for a developer who is too lazy to fix his own bugs? Sorry, but I have to decline this offer.

The pixelart and animation is really great. But you should have spend less time on the art and more and the game-design.

Not being able to use the attack (apart from activating lever) is too bad.

You build something charming, but you should have focused more on the playing part.

In that case, indeed I missed the point. Maybe the game should have gone "all in" to the "recover your ability" part. This is kind of drifting away from the theme also.

Jump feels really floaty and is so short. It seems like it could be a fun metroidvania game but I can't tell because there was so little to see. Make more and I will play more. I just want to see the game in a full form and the art seems pretty well done.

I'm sorry but i loved the look and atmosphere, however only a tutorial? is that the one idea????