Made for GMTK 2019 game jam, in this game there is only one enemy.
Submitted by HartKontainer (@HartKontainer) — 16 hours, 21 minutes before the deadline
Add to collection 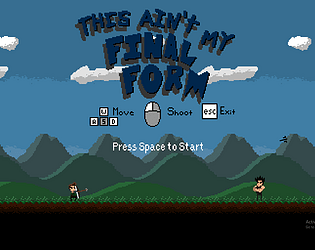 Very fun and chellenging game, although a bt unfair with the dude that keeps jumping in the air, it was so hard to kill him :) The next ones in comparison were incredibly easy. WIth that said, I don't really see the connexion with the theme, although maybe this has to do with the fact that he had multiple final forms, but I wish it was more impactful in way you play the game, rather than who you play against. But I'm nitpicking, this was really fun to play through, nice job :)

The game seemed a little too easy in the beginning.

Submitted
The One Technique
LikeReply
Plague of MindsSubmitted1 year ago

I really liked how crazy the boss gets and his dialoge. The graphics though simply were very easy to understand. The dificulty curve though I think should be changed. In my opion the jumping phase was the hardest and I beat the last phase on my first attempt. I think this is due to that phase being the only phase where the target moves up and horizontally. I really liked the over the topness though and really enjoyed it overall.

Thanks for the criticism, im glad you liked it.

Its Okay but its nothing special

Submitted
Press Any Button To Coninue
LikeReply
sharifenSubmitted1 year ago

A fun game except for when it crashed during the skeleton fight, but it was really fun seeing an with enemy so many forms!

Well that was the last phase anyway so you didn't miss much, im sorry it crashed