A tower defense game without enemies
Submitted by DaVici, Quinten Heijn — 35 seconds before the deadline
Add to collection 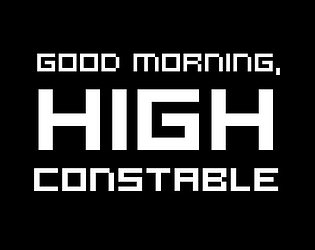 really cool idea, it could be a bit faster in all aspects, from the text scrolling, to difficulty curve. with some tweaks it could be a fun roguelike

Thanks! We will tweak a bit with difficulty curve, but from my playtesting it seems that the gold income is already lower than the amount you would need to spend to have optimal outcomes. Would you recommend also making income a bit higher?

I'm not sure anymore, I now played it couple more times to be sure and it's been a bit more difficult than earlier, so maybe I just got a lucky run :) There is also a bug where you get the points for already rewarded tasks from previous turn, so that might be the problem.

Just fyi, got a few virus alerts when trying to download and run your game. Fortunately, it did not bring the virus to my computer as it would have been my downfall from his majesty's favour.

Really interesting concept, turning a tower defense game into a politically focused one. Really enjoyed the dialogue (but as others have said, kinda scrolls slowly) but I felt that the amount of gold you earned each day was somewhat arbitrary. Maybe it's just me though. Overall, really enjoyed playing around with the possible scenarios that the game gives you. At some point, I just tried to embezzle as much money as I can without building anything which was pretty fun.

Hey! I'm happy our game didn't decide overnight to change his profession to that of being a virus.

The amount you earn corresponds somewhat to how high your favour is with the four characters (the amount of blue hearts). I wonder, how much money did you manage to embezzle while ignoring the general? My personal highscore is 240 gold at wave 11 ;)

I appreciated the parody, but hadn't clocked the "real" game until right at the end! I really like the idea of a pure politics game, I'm not sure I've seen one of those without fighting before. As previous commenters mentioned it would be good to have the text scroll faster, but overall a neat idea.

Thanks! It is definitely also meant as a serious game so I am happy you got to experience that too! Text scrolling is indeed really slow- in debug mode we had the game run really fast and so we didn't notice the slog of reading trough all the text in time >.<'

What a bizarre bonkers game idea. The graphics look nice. Everything functions together nicely. I think the text/window is a bit small, maybe scale everything by 2x, or have to option to.

Conceptually strong. Funny, and a good parody. Took me a bit to understand what the game was "really" about, but I think that's part of the fun.

Id love to see what else you could do with this. What ideas were left on the cutting room floor, etc.

Thanks for the lengthy reply! All that praise does make a bit shy ;p

Both the punchline of the game and the meat of it's gameplay definitely take some time to become apparent, so I'm very happy you gave it enough time. As to your last comment: we want to see where the game can go after the gamejam, so we'll keep you posted :)

I really liked the idea as it is not only a funny parody but it also allow an interesting gameplay ! The retro graphics are good and the dialogue well written. In the negative point, I found the rhythm a little slow as there is a lot to read and the "waves" take a little time. Good job !

Yes, after the first wave has passed we should maybe introduce a shorter version. Also skippable textanimation would be a must in a future version. Thanks for the feedback!

What a perfect way to use combat concepts without combat, and make it purely political. The enemies were all in the general's head, but to be fair, one more palace and we would surely have been attacked.

Thanks for the praise! Did you manage to embezzle a fine amount of money for your retirement?

Nah, spend most of it on palaces, then the general fired me. If I would have to give a minor tip, I think it would be better if the general gives more feedback. For now he only mentions which direction is worst, but it'd be nice if he would say things like: "Only the east is up to scratch." I recon you are secretly simulating an invasion in the general's head which makes him respond as he does, which would explain why he only chooses one direction. Great stuff.

But yes, that's what we do. We do want to expand a bit on the game in the future, so that's definitely something we should consider.
However, it would also make the fact that you can't see the enemies come in less punishing, which was kind of the point when removing that mechanic.

Thanks! We were laughing our asses off when coming up with the idea during the concept phase ;p

Yeah, we're especially happy with the mugshot sprites, which a friend made for us :)