First Person Shooter, but not in the first person.
Submitted by flipinazip — 28 minutes, 44 seconds before the deadline
Add to collection 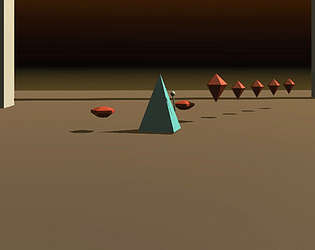 i loved the design and the idea it was very hard for me so I quit very early I was just confused but I will give it a rating because I know how much effort and time you have spent on this game.

You can go check out my game if you pleased it will be very nice to rate and leave feedback.

The title reminded me of a game called Second Person Shooter Zato, but your game is a little bit different. The concept is actually quite smart, but I think the problem is that you should have gone for a more slow paced, puzzled oriented level design because it's quite hard with the view to understand what happen.

Hey, I didn't know that game, it's quite a cool approach to the idea.
I think the combat focused gameplay fits the theme better, but puzzle based gameplay would be more fun.

It was very hard to get used to. I was able to get some success after reading the comments and seeing the "hold w & RMB" tactic but was still pretty difficult (a trade off like you said).

I had some fun with it though and it was an interesting use of theme that I haven't seen yet.

Submitted
Box in a Box
LikeReply
flipinazipDeveloper4 years ago

I'd love to try this, any chance of a Mac version?

It seems I only have to download a package for that, so yes, will do.

awesome! looking forward to it

Let me know if it works.

Hard to control like others mentioned, but fun. Kind of reminded me of controlling an rc car.

Not sure if it's intentional, but if you hold w and right click, your vision sort of lines up so it almost becomes a third person shooter, making it a lot easier but also ruining the main mechanic.

It's true that you gain more control, but you give up the overview over the map and you don't see where the enemies are coming from. It's a trade-off.

The controls are really odd. It seems a lot like a third person shooter where you just control the camera and the player separately.

Yeah, the controls are rough. The idea is keeping some control convention from fps-es (rotational control of the player by mouse movement, shooting by LMB) but have the typical movement controls control the camera. It's totally fair to see that as just a tps with control of the camera, but my idea was that your main player avatar is the camera observing the "hero", thus making the hero a second person to the player avatar. I see that the game lacks the polish to make that clear, though.

Yeah, it was mostly the polish not being there that made the concept you were trying to convey a bit rough but I get it not that you say it and it's a 48 hour game jam, no one expects a lot of polish so that's 100% fine! One thing I would recommend though would be allowing the player to customize the controls a bit more. Since I feel I would have had a much easier time with the controls if I was able to make a few tweaks to them. When a game lets you control two different things completely separately getting the controls right is one of the most important parts since it's very confusing for new people to get into it.

Yeah, you're right. There is a lot of stuff that needs fixing. I hadn't even introduced health an hour before the jam deadline. It's my first gamejam (and my first finished game), so I'm glad I even uploaded something.

That's what it can be like when you only have a little bit of time to make a anything really. This was also my first game jam and my first solo game so I am kinda in the same boat as you.

A very unique idea, hard to pick up because the controls don't exist in any other game but that makes it a fresh experience :D