Aethernauts - Beyond the VoidView game page

A space shooter where you can't die
Submitted by Dreadbot — 29 minutes, 37 seconds before the deadline
Add to collection 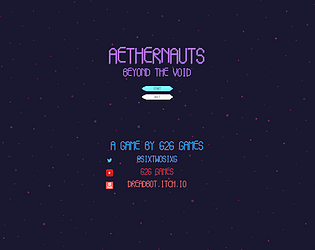 Aethernauts - Beyond the Void's itch.io page

Mmm, I'm puzzled. On the one hand, I really like the idea of not dying. It allows the game to be difficult, without being too punitive. That's super cool! But on the other hand… Most of the game becomes about waiting.

It's not only because of the core idea I think. The game is also a bit long, and the third level feels redundant (despite having a great music). But during this one, the game felt just repetitive, shooting without real care, controling the ghost hastly… I knew that killing any ennemy was just a matter of time, so I just stopped putting efforts.

But I'm pretty sure there could be way to improve that. Providing an incentive to dodge bullets, giving more options to the players on how to attack ennemies, making the ghost more fun to control (as it is, it's also about waiting the arrow to be in the right direction), more various ennemies… There are tons of possibilities.

This is why I still think it's a really good concept. A jam is a jam, and currently it still needs a bit of work. But the core idea has some potential. Well done!

thank you so much for playing the game. I appreciate your constructive feedback. It's really helpful. I agree that there's an issue with keeping the ghost gameplay exciting. One solution I had in mind that you didn't mention was creating enemies that spawn only when you're a ghost that hinder your ability to navigate back to the ship. I think that would have kept things more interesting, so that it didn't leave you groaning every time you get hit. I'm sure all of us would have had infinitely better games if we had just had one more hour of development. Seriously, I appreciate your feedback! Thanks!

I think the concept of this is pretty cool, though I think it's a little arguable whether or not it fits the theme well. The graphics and sound are fantastic. My biggest complaint is the ghost controls. The game comes to a screeching halt when you die. I think it would be much cooler if, rather than making the ghost hard to control, you had to have an enemy alive to possess once you die. Or some other method of adding challenge to the ghost mechanic without it literally just feeling like pulling the lever on a slot machine.

This is really fun! With the ghost mechanic it kind of feels like death has no meaning. I suggest you create a timed death bar - so when you spawn as a ghost, you have limited time to go back to your ship before dying - and a score counter, to give the game more meaning.

Nice game! I enjoyed the art, ambience, and overall aesthetic. It did feel like the ghost mechanic was a bit of a missed opportunity, and at one point I even got hit by the enemy from really close range, and ended up "dying" 5 times because they would just immediately fire after I got control of the ship again. More variety in the enemy types and behaviors may have helped in this case.

thank you so much for playing and thank you for your feedback. There's actually a second or so after you return to your ship as the ghost where you're invincible, but theres no visual or audio effects to cue you in on that. I appreciate your feedback!

Huh, I actually wasn't experiencing that at all - unless I'm mistaken, I would get back to the ship, the enemy would begin firing pretty much immediately, and then I'd die again as soon as the first bullet overlapped with the ship.

I like the idea, but turning into a ghost added so little. Maybe you could have allowed the ghost to enter any ship, including enemy ones, and continue playing with the one you boarded ?

You know, I had considered doing this, and I think you're right that it would have made for a deep and interesting game. Honestly, the only reason I scrapped that idea was because it seemed too difficult for me to implement under the time constraints, and I wound up going for this simpler idea because of how intimidated I was.

Either way, thank you so much for playing. I really appreciate your feedback!

SO much, but so little. Art was great, felt like I was playing a solid game, but it was rather lackluster. No score or real rhyme or reason to the game. Nothing to keep score, or maybe something else to drive the game. Honestly being a ghost was more challenging and fun then being alive. And a few glitches where I would be stuck on an enemy so I would just die and die without being able to get away. But I understand it's hard to make a solid competed game in 48 hours. You did good with the time you had. Good job and Good luck. Hope you can take the time to play and rate my game. Thank you. :)

Thank you so much for playing! I appreciate the constructive feedback. I considered doing a scoring system that works as follows: you start the game with an 'A' rank. Every time you get turned into a ghost, it drops a letter grade (with F being the worst you can get). So, if you can make it all the way through a level without getting hit, you will finish with an A ranking. Perhaps this would have made the game more engaging to play, as I see your point that the only reason to continue playing as it is now is to get to the next level / next wave of enemies.

I will definitely play and rate your game! It's in my queue :) thanks again for your feedback.

Thank you so much for playing it!