Multi-directional shooter without forward movement
Submitted by Davide-Stefanutti — 1 hour, 3 seconds before the deadline
Add to collection 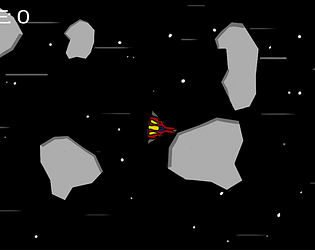 Simple, sweet and fun.  When I play Asteroids I always stay in one spot. This game made that impossible and was a nice spin on the classic.

Its quite fun! I enjoyed the challenge of managing position, momentum, and direction in order to stay alive. I didn't really have any real complaints, it was very well executed.

Simple and clean.  Nicely executed concept of 'shoot to move' and an interesting take on the asteroids classic.   Good work.

Submitted
The Birth of Blobby
LikeReply
azure2sSubmitted3 years ago(+1)

Probably would be better if the elements aren't too big so there's more room to play. But the game is pretty fun to play and adds a good layer of strategy compared to the original formula. Good job man!

Great job on the concept! Fits well with the jam's theme and puts a nice twist on a classic formula.

Well that was actually more playable than the original asteroids as I remember it. Thank you for dampening movement, so I don't just keep drifting once I start moving. Also making the game rather slow as a nice design decision. It could have easily been a chaotic,  panic inducing mess, but with everything moving slowly, there's actually time to think through what to shoot and how that will move my ship. The "near screen edge" indicator was a nice touch. I'm guessing you had a playtester who kept slamming into the screen's edge.

I appreciate controller support, but the menus still seem to be mouse only which was a little annoying when hitting reset.