Run to the rhythm and tap to the beat in this endless rhythmic runner
Submitted by GammaFoxTBG (@GammaFoxTBG), struuuudel, Fer-i (@FeiEsp), Alejandro PHz (@AlejandroPHz) — 30 minutes, 46 seconds before the deadline
Add to collection 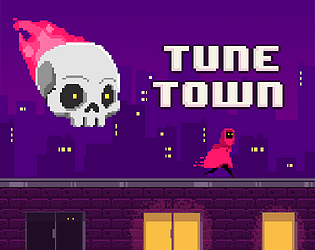 What was the size of your team?
4

How did you incorporate the theme?
Your trusty boomerang comes back every time to be reused and the tune is reused every loop

Amazing! I find it quite difficult but I'm not really good with rhythms hah. Congrats!

Very cool! The graphics and audio are amazing and very charming. It reminds me of Crypt of the Necrodancer. I really appreciate how polished the game is, especially the really satisfying main menu sounds. The leaderboard is also a great addition. Sometimes I had a little trouble nailing down the beat of the song and getting my actions in. Maybe another visual indicator would have been nice to allow the player to know when they can jump etc. Overall though this was a lot of fun, nice work!

Overall it's a good game. Simple, but very polished. Leaderboard is a nice addition. Though the taking actions to the beat thing is rather limiting. There is no indication other than music and buildings in the background. Also I think you could only take 1 action at a time so I couldn't attack and jump at the same time or the time for each beat is too short, so it was a little difficult. But it was definitely an enjoyable experience.

Woah, this is extremely difficult to manage 3 different things to the rhytm!

The tutorial was a little bit fast for me to understand. However:

The buttons on the menu are polished with the sound and the mouse hovering.

The graphics are nice, the music as well and the gameplay is simple. The fact the sprite in the background "beats" adds a nice touch to the world design. Great job!

I couldn't really hit any note, maybe I am just bad, anyways, good art and audio, if polished and given some sort of visual indication as said before by some reviewers, would be so much better!

Visuals and audio are incredible.

This is one of those that can be polished and published as a mobile game with ease. Well done

I'm not the best at sound cues but maybe a visual indication to help with the Rhythm.

Thank you so much for the kind feedback. As for the visual indications, we did try a couple things to help with that, but perhaps it should have been made more explicit through a more thorough tutorial. The city background in the game pulses to the beat, and the windows below roughly line up with where the beat occurs, so you can use those to help track. But I'll definitely make a note of it for the future! Glad you liked the game.

A perfect game for train travel ^^

It’s a good concept, good start, although more player feedback would be nice. I’m also confused about the arrows. Apart from that, I don’t know if it’s just me or it’s slightly out of beat?

Do you mean you'd like if there were more SFX in response to actions? As for the arrows, you have to tap the shown direction to activate them; hitting all 3-4 will give you extra combo for each completed. As for being slightly out of beat, unfortunately we noticed later in development that some systems have mild synchronization issues that we don't seem to have much control over without middleware. Sorry to hear that it happened to you, but we hope you were still able to enjoy it.

Yeah, I definitely enjoyed, you guys did a good job :)

This game really slaps! The gameplay is certainly creative, and the looks and music also are really juicy. The main character is adorable, reminds me of a void creature of Hollow Knight but instead of insect shells he uses a cape and it looks awesome xD The menu is also a really nice touch, great work!

The total bane of game jams are the balancing issues, which every game seems to suffer unfortunately. And for Tune Town, the beat is certainly on time, but the window to do actions really feel too short, especially when you have to perform two actions at the same time. Some sequences can turn out to be really hard at times, like pressing the up arrow while there's an enemy in front of you, so you have to really keen on pressing up and right, without counting the boss that lurks behind you.

Speaking of the boss, was he supposed to deal any damage? At first I was very cautious to not let him get close, but once he indeed got close... He stayed at my face and everything went as normal.

The tutorial could also quickly explain basic actions such as jumping and throwing boomerangs (which I had to look to the controls again to realize that I could also shoot them backwards).

Also, the character can sometimes get stuck from a lower platform to the really tall narrow building, and from there the game runs as usual but the player gets dragged behind. Seemed funny at first but I had to close and reenter the game to play all over again (Maybe a pause menu with a restart could be a cheap help with problems with these).

The windows that stay underneath the player served as a good indication for me on when to jump, but I didn't kind understand when they turned on or off and confused me some times, maybe they could light up when the player passes through them as a visual indication of actions?

And finally, the clapping sound for feedback for the score arrows are a nice touch, but I don't feel the same for jumping and throwing boomerangs. I mean, there are sounds for throwing boomerangs, but they do not fit nicely with the music it seems, a rapid woosh sound would be better off I think. And for jumping there's no sound, a really basic jump SFX would be enough to tell my ears that I executed it right. Anyways, you could take inspiration on how osu! and similar games tackles on these things:

Overall, great job for the team! Your game has a lot of potential, but there are things you should look out for if you wanna continue the project. Keep it up, guys!
LikeReply
zoneoutappsSubmitted1 year ago(+1)

Great job, the look of it is awesome! and all the environment going along with the beat was a nice touch.  Very clean