Don't bother playing this game, its not finished.
Submitted by PhilipL — 39 seconds before the deadline
Add to collection 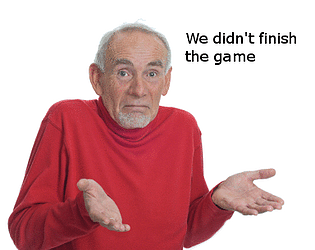 I liked the game, even if it isn't finished :)

Love details in the VFX (camera shake and explosion), they really give the controls more juice. One complain would be the inventory panel, I stumbled upon it by mistake but I might help to have it always displayed so I didn't have to count the drops mentally.

I can rate this cause I did not submit myself, so good luck with the rating, and hope you finish on the next one!!

39 seconds before the deadline!!! wow

Still good idea and lesson for next jam good luck

Thank you, I've participated in 5+ game jams so far, but they have all been 48 hour jams. I was not prepared for a 7 day jam at all, and the lessons were DEFINITELY valuable.

Honestly, for an unfinished game, it's got some good stuff and is better than some of the other games I played. What it's truly missing is something to link everything together, so a menu, a story, something around those lines. Otherwise gameplay wise even if it felt grindy it was fun. In the future id just think about making combat a bit more interesting. The music was great so good job on that Id just be careful with what seem to be music switching zones because what it resulted in for me with the samurai level was the crocodile music getting super loud when I walked up to the gate and didnt have enough scales yet. Otherwise, honestly not too bad of an entry, id like to see what you guys could make with a finished game. I am struggling to see how it fits the theme though...

Yeah, you really did hit the nail here. It was supposed to have a main mechanic being a wiki that you used to get a secret ending that the game was hiding from you. It wasn't finished either. We really did over scope with this project.

Thank you for the feedback :)

Okay, so the game isn't finished, and it's not amazing because of that. I won't give it much thought because I can really only rate a game with enough content.

However, I'll be damned if I won't recommend a game in which you;

The last man standing in the Australian defense force must fight with glory to the bitter end against the onslaught of a million of violent crocodiles with nothing but your wit, your willpower, and your 1943 Cruiser AC3 Thunderbolt anti-artillery tank. Just you, the crocs' and 29 metric tonnes of stone-cold Australian steel.

Yeah. Gameplays' alright but I'd love to be able to turn my gun the other way around to be honest.

that sound intresting. Tho that wad far from what we were giong for. There is a dere t bit of hidden content. There was supposed to be a wiki with the game that you used to access different parts of the game trying to get an alternate ending. So information was your greatest asset.

The rating is kinda generous too tho, for how uninished the game is. But i will take it.

LikeReply
IneptOrange - (Writing up bugs for fun)173 days ago

It was mostly a light hearted joke, but keep at it. We all start somewhere :)

The game have a good gameplay

The audio is good

thanks for the feedback. The game wasn't finished anyway. But i will keep the feedback in mind for future games.

I understand the game isn't finished... and the game is not that bad. If you had time to add everything (and maybe an inventory to see the items you have), I'm sure this would be a great entry. Still, congrats on being able to submit your game in literally the last minute before the deadline!

If you've got some time to spare, you can also check out my game. Pretty fun entry.

i will probably check out your game, there is an inventory tho i haven't added any way to tell you how to open it, + it's bugged. Also there was supposed to be aother mainmechanic in the game, but it didn't make it into the game

Not bad, i kinda wish I knew how many items I have collected, going back and forth to the doors gets old quick.. would be cool to see this develop more!

Great job on creating it and posting it 39 seconds before the deadline... WOW! I'd love if you checked out my game and let me know what you think! :D

I will check out your game of course

Half of the content isn't even aaccessible. There was supposed to be this wiki with the game that you used to discovering new areas and get a secret ending. But we didn't have a time to finish it. Also there is a Menu (the wiki was supposed to tell you how to use it) just press tab

Suppried you played this mess 👍

LikeReply
Lord of the eggSubmitted177 days ago

How does one shoot with a tank? O_O

Submitted
What Lies In The Dark
LikeReply
PhilipLDeveloper176 days ago

Don't bother, the game is bugged and incomplete.

If you really need to know; WASD, mouse, left mb and tab.

Soo, I killed the dragon and nothing happened.
I like the idea, but I can't see the liar part. Am I missing a point?

Well it is so far from finished that the main concept isn't even in the game. Thats why it is "The game we didn't finish", just released it for fun. I was supposed to have a wiki come with the game with pages you could search up to find out what to do. But we never finished the wiki. Gonna try out your game later, so that playing this garbage wasn't a waste of time.

My other games are usually a lot better.  Sorry for the inconvenience.