A game where you cause literal chaos around the world
Submitted by studzy — 8 hours, 23 minutes before the deadline
Add to collection 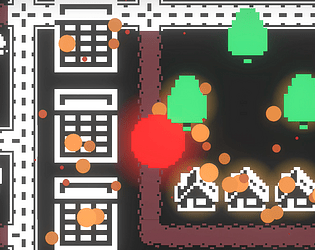 In what way does your game fit the theme?
The chaos is created by the player himself.

Did you write all the code yourself and made all the assets from scratch?
All the code except the camera shaker & pathfinding is by me, art assets by Kenney's assets.

Fun game! Loved the black and white pixel art! I kept trying to drop buildings on people with the grab beam though

Submitted
A Little Favor For Chaos
LikeReply
AoOkamiSubmitted302 days ago

Really well done! Had a good time playing it

was expecting building destruction, more enemies trying to kill you, tanks or helicopters,

You're correct & I really wanted to implement more enemy types, but the deadline was near and I couldn't fully finish the game. However, I've added it to a list of post-jam updates.

yeap. I think we all feel each other pretty well, that good dam clock dont stop ticking, will play the updated version man, try out my entry tell me what you tought about it

Great game! I really liked the art and the mechanics are very easy to understand and without any bugs :D

Hey studzy! Congrats on completing the jam! I really liked the conceit here. Feels like it was inspired by the recent game Carrion where you also play as the monster. That first level felt really cool and fleshed out, but the rest of the game didn't quite live up to that initial promise. The screenshake was a  bit* much, especially when it compounded with itself, but it was also quite the spectacle. I have to say I chuckled at the absurdity a few times and that's always worth a job well done.

How many levels are there? I feel like I got to the third level, never got a "press N for next level prompt", then got lost in the nothingness and pressed N only to be returned to level 2. Some sort of HUD indicator on where stuff was would be nice. Guys shooting at you from offscreen felt really weird, but I guess that kinda works as an indicator of "there's stuff over here" lol

Well said, same feedback from me as well.

So far there are 3 levels, which is the reason of the "press N  for next level" prompt not appearing. About the screenshake, I'll add an option to disable it soon and will tweak it myself after the jam is over.

Neat visuals, and definitely chaotic. The screenshake was a bit much, and you're right, the game slows down easily. Some sound for the laser and music would be nice.

Some kind of a UI would be good, and feedback as to when I am getting hit. The art style was really cool! The subtitles went by kind of fast at least for me.

Perhaps more atmosphere (like music, that would be cool!)

I liked the idea and the atari style graphics.

the art is very cool and apart from getting stuck on the first door i didn't run into any hiccups. plus it made  chaos very fun!!

Submitted
Let There Be Slimes Final
LikeReply
NickaroSubmitted308 days ago

Loved the art and the mechanics.

Loved the game idea it was new to me

The game fits the jam perfectly and its also fun !

Very satisfying game. It reminds me a lot of katamari with the growth and complete destruction around you. The sound effects for eating those poor souls are very satisfying.

The taking damage sound is a little high volume right now, it made me jump out of my seat the first time I heard it!

Overall, a fun and satisfying experience : )

The Audio for this game was wonderful!
Love the game idea

It was alot of fun to play, pretty original and awesome gameplay. Well done!!