Revert to Monke, Solve the puzzles!
Submitted by CG Smoothie — 4 hours, 41 minutes before the deadline
Add to collection 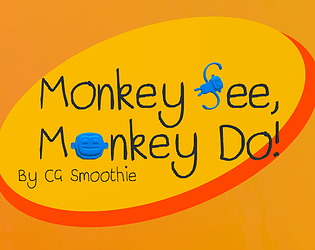 In what way does your game fit the theme?
You require more monkeys as the levels progress

Did you write all the code yourself and made all the assets from scratch?
Yes

Great game! I had a little problem with level 6 because monkeys kept walking on restart button.

A lot of fun, i like the music and the movement!

Wow super cool game
plz rate mine if you get the chance :)
https://vodski.itch.io/drone-rescue

Wow super cool game
plz rate mine if you get the chance :)
https://vodski.itch.io/drone-rescue

I bought this game and I'm glad I did!

Such a cool angle on the game...I really like the way each level builds on the next and the instructions are suspended in the air... a cool concept!   I think we should have a speed run contest with this one!

That'd be pretty cool! Thanks for playing!

This game was so much fun! Something about the combination of artstyle, mechanics, and music just made it so relaxing to play. I love the title screen, the opening bit before the rest of the UI comes down is very cute. One thing is that when you make the current monkey be a ladder, it selects the last monkey in the line which requires you to walk it a little further to get back to the same position. I would just make it pick the next monkey in line which is closest.  Also there was that little big where the monkeys would just fly into the sky, but it didn't happen often. Thank you for showing up to the stream today! I really enjoyed playing the game and it was nice to play with the creator. 100% I would buy this game. It would be interesting to see it in a mobile format.

Mobile could be good! Might port it over once I finish my current full-time game and might add more levels, definitely will fix those bugs haha. Really glad I got to see your reaction!

Awesome lol. Yea thank you so much for staying in the stream till the end. I'll announce further streams in my discord. If you wanna join, here's the link https://discord.gg/qbUBg2tjED :)

The walk animation and idle actually fill my soul, love it

Great Game. Love the Style, Music and the Idea. Especially the Main Menu and Level Transitions. Sometimes i got stucked with all of my monkey and my dumb monkeys ran other the reset Button too often. But Overall great work :D

Yeah, that's why i added the restart button in the Pause UI. Glad you enjoyed it! :)

The menus look sick the mechanics, I felt a little rushed at level 4 where like 3 things are introduced at once. Other than that the art style is great :D

Oh, I could have spread out the tutorials into multiple levels, I just didn't want more tutorial than actual levels. Thanks for the feedback!

I love your main menu!

Thanks, I spent a whole day of the jam on it!

Hahah I had fun with this :D Good job! Love the idea with the toy monkeys! Good job!!

Well, kinda interesting game! Loved nearly all in it. But, soundtrack seems to be a little bit annoying. The contols are not very comfortable. Anyway, great game! Well done! <3

I made a music volume setting in the menu just for that reason! Glad you liked most of it!

I LOVE this game the art style and the music are great, although I think you should limit the number of monkeys allowed on the bridge/ladder thing because I kept restarting because I accidentally used all my monkeys on it.

I thought about that, but didn't want to limit any freedom on how to solve the puzzles! Good idea though! Thanks for the feedback :D

LikeReply
Zach On TrackSubmitted1 year ago

yeah, I encountered that bug a lot... I'll try to fix it in the future! At least it doesn't happen that often and the Reset button in the UI is definitely helpful!

I love the art it felt like I was a toddler playing with his toys again! The idea of stacking monkeys on top of each other is fun and fits the theme very well. I did encounter a few bugs in level 7 where monkeys kept floating to the ceiling and the camera would endlessly follow them but at least there's a reset button in the UI! I liked the fact you added sliders for the music and sfx seperately as well.

Yeah thanks for the review! I encountered that bug a lot and that's why I added the reset button! Glad you liked my sound fx sliders, I spent time on the sound effects so I wanted them to have a different sound setting haha

This one was adorable! I love the choice to make them plastic monkeys in a barrel -- you achieved the toy look very well! And the mechanics you made up with them were really great too! Only issue I had was that other monkeys would sometimes walk over a reset button when I didn't want them to, or I couldn't do an action on a certain platform. Otherwise, the presentation was top notch and the concept was solid! Great work!

yeah that was a problem especially in the last level. I'll have to keep that in mind for future games! Glad you liked the art and I'll have to check out your primate game! Lol

It's a very interesting and very nice game to play. Whether it's the Art Direction, the Sound Design or the controls, everything is pleasant to use. The player is very well guided through the different levels.

Thanks! I'll be sure to check your game out!

I actually like the art choice on this game a lot, its quite simple but fits the idea perfectly.  You also nailed the theme.

The monkey ladders take some getting used to since you have to stand on the platform to attach another monkey and not on the highest monkey, same goes for horizontal ladders.

But apart from that, this is a really good and solid entry.

thanks! Love your art as well and will try to play it

i liked this game.  the purple monkey kept floating away

Thanks, I'll try to take more time to debug in the future