Submitted by sashbros (@sashbros) — 1 hour, 5 minutes before the deadline
Add to collection 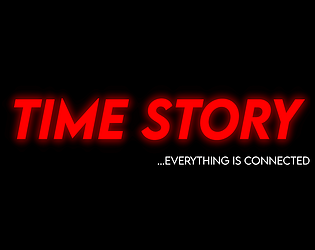 Ranked from 105 ratings. Score is adjusted from raw score by the median number of ratings per game in the jam.

In what way does your game fit the theme?
Moreover to the obvious idea of rewinding the time in the gameplay... the story in this game is about time travel.
(SPOILER ALERT) Check this game's description if you didn't understand the plot of the game.

Did you write most of the code yourself and made all the assets from scratch?
Yes. All from scratch. Apart from the Audio Manager by Brackeys. Obviously XD

Really nice game! The idea and the story are really cool. The jump is a bit delayed from the moment you press the key, which makes it a bit weird, but apart from that great entry! Good job and keep it up :)

I would really appreciate if you could check out my game and leave a rating, thanks!

nice game , when I fist started it  I was WOOOH fast too fast XD

Nice game. Specially like that you used a comic format to present a storyline.
The controls are kinda slippery (but I think that was the idea).
The theme is more on the story than on the game mechanics (which may be good enough).
Sometimes, since the player is a cube with no face, eyes... I lost the sense of direction, and I didn't knew in which direction the sword was swinging. (Those deaths were a bit frustrating).

Submitted
Before The God Slayer
LikeReply
AJtheBeastSubmitted2 years ago(+1)

I really liked the feel and the aesthetic of the game. I would recommend adding parallax effect to the background. But apart from that, no complaint. Really good game.

Could you please take the time to rate my game too? It would mean a lot to me if you did.

Submitted
Back To Square 1
LikeReply
sashbrosDeveloper2 years ago

Cool take on the theme lol. Loved the Death Note track too :P

Love the game, character acceleration curve felt a bit drastic, as in they accelerate too fast and i didn't know where i was going. Overall, enjoyed the story

Cool game! I finished it. :) I love the cut scenes with comic style. And the story was also surprising. =D

Enemies could warn you somehow before they shoot. Now it was a bit unfair because you could not tell when they will attack.

I love the story and the cutscenes! The graphics are a bit too "simple". If you create a little character and animate it, it would look great. Also the colors are a bit oversaturated. The mechanics were all in all good. Improvements for the mechanics/controls: Lower the speed of the player. If it's a fast paced game and you can't change that, you should make that the camera is fixed on the players position. The music is great and I love it! All in all good work and with some more polish it would be even better!

Great! It is a fully finished game and you manage to do everything in 1 week. You've been smart to focus on the gamplay etc...without many worries to use a simple pink square as character ahahah The movements are fluid. The technical part is well executed. The only bad thing that comes in mind is that the REWIND mechanics is just e simple restart of the level. But, overall, well done! ;)

Wait! There's more than just the "REWIND" in gameplay.. Play the full game and see how the story goes..

Edit-  Time travel stuff is going on...Check the main page if you didn't get the story :)

I think this could work with a bit of improvement, such as making it so the camera isn't so far to the right of the screen, making sure enemies are shooting you from a further range, and in level two the jump is almost impossible to do so you may have to tweak some things here and there but apart from that the game has potential.

Great story setup. I wish the movespeed wasn't quite as high, as it gave little time to react to what you're running into. Other than that, very enjoyable, nice work!

I really wanted this to be a speed run game lol! but even still the swoosh and platforming were pretty satisfying to get down and you did a great job with a story theme! I would suggest the enemies showing they are going to fire though, was hard to make it past them when it felt almost random when they shot.

Game is good and fun.Player is moving too fast,maybe player can go much slower.Good job!

If you want,you can play my game:

I liked the story! Comics were a nice touch. Sword fighting felt solid too. I think the addition of the screen shake when you chop something was a good idea. The character is way too fast though in my opinion. It's hard to control when I can barely see in front of me. I think it would help if the levels were longer and the camera zoomed out once the player reached a certain speed. That should help keep the "momentum" it seems like this is trying to produce while also letting the player keep track of their surroundings.

Loved the game. Controls are a bit "quick" but all in all a good submission. Great use of an in game tutorial

Could you please play and rate my game too?

Hehe nice game ^^ Think what i liked most about the game is actually the narrative. Comic book storytelling. Found it really fun and immersive, adding to the gameplay feel. I like the simple visuals.

Anyways, good job on the game ^^

Please have a try at my game too.  Would love to hear your feedback  :)

Overall:
I quite enjoyed this game (I played it to the end, which I haven't been able to do for all the games I've reviewed so far)!

If you do decide to play/review/provide feedback on my game (which I'd appreciate, but in no way expect), you can play it here for the WebGL version (it's exactly the same, bugs and all) to save you having to download anything: https://moocow17.itch.io/rewind-bullethell-web-version
(but please leave any review/feedback on the official jam link: https://itch.io/jam/brackeys-4/rate/724985 )

Thank you so much for this detailed feedback.. Really appreciate your efforts. Thanks again :D

Edit: will surely play and give feedback to yours..not as detailed as you did :P but I'll try my best to.

Thanks! I really appreciate it! Haha, I'm not expecting people to write essays like I do, I just tend to get carried away hahaha.

Very good to add narration to the game, but you also have to take care of the gameplay, you can improve the design of the levels so that it is not so linear, overall good job.