A chaotic bullet hell where time is your only ally
Submitted by PiggyTheAstro — 30 minutes, 48 seconds before the deadline
Add to collection 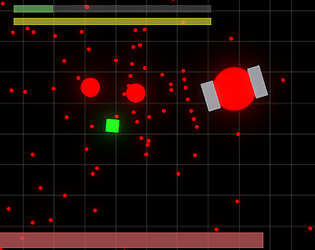 Ranked from 142 ratings. Score is adjusted from raw score by the median number of ratings per game in the jam.

In what way does your game fit the theme?
You can rewind the game in 2 ways. Pressing space (minor) and collecting the clock powerup to rewind to the checkpoint on death (major)

Did you write most of the code yourself and made all the assets from scratch?
All of the code and art is by me and my team (check credits). The music, however, is from Eric Matyas at soundimage.org

I liked the game my only problem with it is that the rewind mechanic did not seem to be to imprtant to the game.

I had a lot of fun playing, even though the 3rd boss became invisible out of nowhere and felt a bit unfair. I also liked your use of geometrical shapes to represent the different enemies.

It's a neat concept, It's a little difficult to start out with, I wish the gun would shoot a bit faster although I'm not sure if there's a powerup for that later on.  The audio is great and it feels nice to play!

The game look well, it's challenging, sometimes frustrating, the audio is good, and the shooting mechanic works

Really nice, I like the music but the loop does not work so well.

I like the square graphics, and the game plays is very good, congrats

Reminds me a bit of my game actually!

I've enjoyed it! It's quite difficult as others have mentioned, I've played a lot of times and am really struggling to get past the 2nd/3rd level. But the fact I'm still playing it is a good indication of the fun to be had with it! The variety in the enemies was cool too!

I liked the choice of powerups after defeating an enemy, that made me replay it quite a few times to see what they all did. However, because they seem random, sometimes it was brutally hard if you went into the 2nd level with only the starting pistol (because the previous powerups were just health or clock).

I was less sure about the choice to give health back to the enemy when you rewound though; that to me somewhat negated the rewind ability a little bit. Because of that I only felt compelled to use rewinding when I knew I had gone through a stretch of taking damage and not damaging the enemy much, or if I was about to die and had no other choice (even if that meant the enemy would gain most of its health back and i would effectively be starting the level again).

One problem, which is the same problem in my game, is the lack of a continue button when you die; would have been nicer to just respawn on the level I was up to with the same powerups (but I ran out of time implementing the same thing in my game, so I cant complain too much :P ).

Overall I quite enjoyed your game!

If you do decide to play my game (which I would appreciate, but don't feel obliged) then feel free to play the WebGL version here to save you having to download files: https://moocow17.itch.io/rewind-bullethell-web-version

Very nice!
The background music is a bit loud, but really nice!

Please, play my game too!

Nice game! Difficulty jump from level 1 to 2 was too severe for me... I could not beat it. Player maybe could have been a bit faster to avoid those crazy bullets.

Damn this is fun, but i feel like the rewind thing is a bit useless, cause apparently i can shoot bullet from infinite distance, so if i go far enough, i can shoot and dodge bullet pretty easily

Whew, the game is hard! Nonetheless it's enjoyable and music fits in very well.

I'm terrible at bullet hell games but it seemed good. I think it would have been better to move faster so its easier, but maybe its supposed to be really hard.

I suck at bullet hell games, or even just games where you're getting shot at in general, and couldn't get past the first enemy. However, judging by the other reviews, that was a me problem and not a you problem. Looking at the description, it does technically fit the theme, but it feels like a bit of a stretch to me. Other than that, I can't give much useful criticism, since I suck so much at bullet hell games that I don't play them very often, so don't have much to compare it to.

fun game to play and very challenging, i like how it was really clear and simple to play and was easy to sit back and enjoy, great work

Nice game, intense and fun! but sometimes its  too difficult!

Nice bullet hell game, it gets stuck some times,but other wise great work

Really difficult game to play. The graphics are really simple but the mechaniques of the game are really good, especially the player movement.

Interesting arcade sort of game, the enemies have interesting patterns so it's quite enjoyable to play :)

My negative points would be the audio & graphics that could be improved to make the game more appealing, other than that really like playing, great work :)

I'd appreciate if you play and rate our game too! :)
https://hadilepanda.itch.io/corewind

Solid game but a very difficult one. Good entry :)