Help a little rock in space grow up. He wants to shine, he wants to spin he wants to be the biggest of them all.
Submitted by KrisBijnens — 2 hours, 4 minutes before the deadline
Add to collection 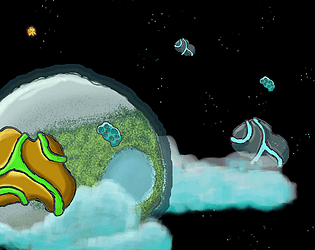 I thought you applied the theme well. The growth of a small planet collecting material in space.
It was cool to change the planet as you collect resources.
Art can be more polished =]

Cool idea, sounds and visuals work well. After playing for a while it felt like there were situations in which it was impossible to avoid being hit - the instant game over felt a little brutal in these circumstances. Had fun though, nice work!

Really interesting concept! Evolving planet via collecting resources is nice. Clouds in space? Idk if that was a design choice but it looks cool. I'd say it's unfair to have only one life, because sometimes there's no escape from meteors. And I don't think you chose the right font for the style of this game. But overall I liked the game.

the idea was (before real life kicked in :) ). collect water to build up clouds-water, stage 3 collect carbon + sparks to make forest grow. in a later stage collect DNA to 'unlock' new animal sounds. all materials would have a maximum healthy level if you go over it you risk dying. if you have to much materials you could crash into a meteor to make stuff go away. so technically you would have a live, and could die because you got hit to much times by a meteor, or when water/carbon levels would raise to high. I didn't had the time to make it all, so the little things at the bottom stayed to measure what you collect, and you can hear 2 different birds when collecting DNA. you can also slow down meteors spawning a bit, collecting stuff makes meteors spawn too. Slow and easy wins the game :).

This game is good, but it is laggy. and do you have the paid version that lets you make the game in nw.js?

Nw.js is not part of the paid version. But I had to install something extra for this to work. Althoug I like it I do have the expierience it becomes laggy a lot faster then the browser thing.

looks cool but I can't play cuz I use mac

Nice game, I like that the planet is slowly given life

Submitted
Around the Galaxy
LikeReply
AlvaroVillaSubmitted1 year ago

Nice game! Very relaxing. Cool game over transition. Not sure sure if it was an artistic choice, but the art, along with the low frame rate reminded me of the Reading Rainbow intro. Damn that was long time ago.

Congrats!
Submitted
In the Palm of my Hand
LikeReply
kaeverisSubmitted1 year ago

I really like the visuals and sounds, great job! I like how game over text flows smoothly after dying.

Great game. Nice visuals and the game over title, when they just flew smothly as I died, that was great. Only one thing and that is the resolution. Was it supposed to be for mobiles ?
My best run was 57,32,5 "resources" I just couldn't make more than that :D
Keep up the great work.
Also try my game: https://yahub.itch.io/last-three

Works great. Controls could be a bit more snappy, maybe add (more) acceleration when keeping up/down arrow pressed? Visuals: even though I read the f***ing manual, I was still wondering what I was collecting. Collecting water & carbon asteroids also feels like a bad thing: explosion sound & visual. But I understand that's what happens when an asteroid strikes a planet :)
Also, I want more lifes, or a hitpoint system. Maybe more comment later when I progress :p