Submitted by kaeveris (@UlaPelirroja) — 2 days, 23 hours before the deadline
Add to collection 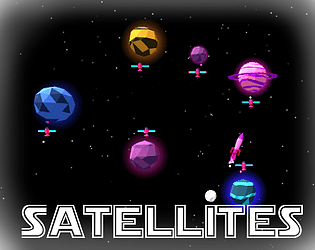 nice game, overall when I play on website the game area looks a bit to small for me. maybe start at a bigger screen, and change this later as game becomes more difficult.

Thank you for the comment! I think in general the area is probably too small, maybe it would be better to make it bigger.

Congrats for finished the game, well done.
The concept was pretty cool. It is very difficult to control the rocket, you need a lot of training.
I did not like the music very much.
For this game style a death count would be interesting ;)

Please, rate my game and leave some feedback too =]
https://itch.io/jam/blackthornprodgamejam2/rate/378954

Thank you for the feedback! Yeah, I wanted it to be hard to move the rocket, to kinda feel that you need to be cautious with so many planets around. Death counter would be a nice idea :)

The movement of the ship was a bit too slippery for me. Well I think you intended that. The music is cute I like it. Wish that you won't get a game over if you touched the edge of the screen. I suggest you move it back until the camera doesn't show the whole ship. It's hard to play but I like it.

Thank you for the feedback! Yeah, the ship is intentionaly slippery and I wasn't really sure what to do with the edge of the screen. Maybe moving back like you described would be better than just dying :)

Game has lots of potential.  Pretty difficult but I liked that!  Needs some polish but a good concept.

I'd really appreciate it if you would rate my entry in to the GameJame too :)

Thank you! It definitely needs a lot of polish, but I'm glad you liked it!

I really enjoyed this game. I had to get used to the "full speed is bad" mentalism, but after switching to fine adjusting my speed the game was fun. The later levels are really challenging, especially because some of the planets have a wrong collider (you die without touching the surface visualy).

The sound got a little annoying after some time of playing, but it's ok.

Things you could improve:

But overall, this was one of the better games I played so far.

I hope you take your time to play and rate my game too.

I might have forgotten to adjust some colliders, I did a lot of changing the planets, then deciding different and changing again.

Cool idea with increased turn speed of rocket and showing engine animation only when engine is on. I remember thinking about these at the beginning of creating the game and then focusing on something else and forgetting.

The colliders of the planets are a bit too big and they cause a lot of cheap deaths.

On the first 40 second level one of the sattelites is bugged and the model and the particle is at different places.

Then it would be nice to have some particles when you move the rocket and when you pick up the satellites and one for the death(maybe some screenshake to).

And the music has a lot of potential, but as it is now it feels a bit off(mostly the electric guitar).

The rocket and sattelites would really need some sounds.

Then some positive stuff:

I love how the planets shine and how they slowly rotate, it would be really nice if they could be a source of light so they would shine onto other objects.

Then the timer is great because it makes you fly more carelessly and it makes the game more fun overall.

The controles feel amazing and it is impossible not to try the dangerous moves when you feel like you are flying around like a maniac.

So in general i think the game is really good

Thank you so much for very detailed feedback! Good idea with putting more particles, sounds, even screen shake, I think it would make the experience better

So interesting movement, but also so hard to use.

One thing I would change is size of colliders of satellites, they are too small in my opinion.

And to be honest, I see here some potential for speed run game with ranking system where players could beat their records etc.

Thank you so much for your comment! I wanted the movement to be hard, but maybe I exagerrated :)

this kind of movement is really specific and interesting. I don't say it's bad, I like it, to be honest.