Day of the SleighView game page 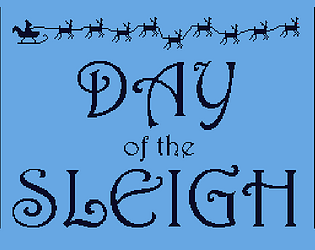 Day of the Sleigh's itch.io page

Opinion of Adventuron
Love it, have used it for lots of games now!

Prior Coding Experience
Four previous Adventuron jams, two (and a half) other released Adventuron games, several more projects-in-progress and some occasional BASIC dabbling

Finally, I reached all of the achievements, for the 3rd run. It was not easy, but I enjoyed the manipulating with the objects. It gives a unique taste to the game. It was worth the time. :-)

Thanks for playing, glad you enjoyed!

As the top two prizes were already gone, but you finished in the top 5, you have the option of the following:

If you choose the 2nd option, the worst (or best) that can happen is that you win a different prize. Choosing the second option will also put the Pico 8 license into the participation draw.

Let me know your choice. I'll be asking this same question to the entrants that finished 3rd, 4th and 5th.

Nice well rounded game.  The graphics are great and the replay value (different ways to do things and achievements) is a really nice since the game is not too long.

I especially liked the interface (for example choosing one out of 2 questions to santa, and after asking one, the second one is automatically asked) and the different ways to do things.

Short and sweet game, with a different setting that most of the other entries.

The only thing I didn’t really like is that you have to look under or behind things, which is not that common nowadays in interactive fictions.

Aside of that, I really liked it, and the achievements were a nice surprise (even though I didn’t try to get them all; I’m too lazy :p)

Thanks for your comments!  I'm going to rethink 'look under' etc. in future games as a lot of people seem to find it unintuitive.

I really liked how much was able to be fit in such a small area. I really appreciate the hints to look in and under things - I never would have thought of that if it was not suggested. A very fun, short and sweet game.

I absolutely loved the achievements at the end - a total surprise and very intriguing way to inspire some replays.

Lovely low rez graphics, show everything that is needed and respond nicely to events.

Only thing that threw me for a while is that I moved the pool table but did not reveal anything under it until I searched under it afterward.

Thanks for your comments and I'll have a think about the pool table! Glad you enjoyed the game 🙂

Definitely one of our favourites! Nice story, interesting puzzles, cute graphics, and the interactivity is really best in class. Achievements are a nice (and surprising touch). Just surprised you don't speak reindeer ;-)

So glad you enjoyed it!

I would definitely class this game as "short and sweet", which is not only welcome, but actually a bonus considering that it has some replayability in the form of a randomly-selected present required to help Santa. The achievements board after completion was a nice extra touch, and I was simultaneously annoyed and impressed that save-scumming didn't fool it! A couple of the puzzles weren't so intuitive before finding the solution (if that makes sense?), but I didn't have much trouble solving any of them just by trying everything that I had to hand.

Also, your graphics set the scene nicely, despite their low resolution, which is quite a feat!

Thanks for the comments, glad you enjoyed it!

Excellennt - love the immediate approach to everything. It's not too wordy - every word on the screen is effective at communicating the right tone and inspires curiousity in the right places.

I finished the game with the HULK SMASH approach, and I'm so glad you left that in there instead of having some obtuse reason for not doing it. I like the multiple endings and multiple approaches (my game has the same!).

Graphics are great too, perfect at communicating everything you need to in the resolution you chose to do the graphics in.

Thanks Gymcrash, really glad you enjoyed!

Here we have another extremely festive puzzler made in Adventuron (a system surely designed for the creation of Christmas games), except this one has extra sparkle as it is set in the 1980s! The decade when the finest Christmases were wrought. If, like my family, your idea of the perfect Christmas tableau is the BBC Christmas ident from around 1981 (YouTube might help you here) then you'll appreciate the flavour of Day of the Sleigh. The cute pixel graphics and beepy sound effects serve this setting well and there is a proper story here of potential human tragedy (ok, maybe that is going a little too far) fronting what is a fairly straightforward and compact puzzle game. The gameplay is very linear (you solve one puzzle to progress onto the next one), which is appropriate for this style of game and makes progress tangible and quite satisfying - you feel as though you are getting somewhere, despite one improbable problem after another suddenly cropping up to impede your progress. The characters are charming and there is a gentle wry humour running throughout. The spectacle of Santa being trapped in the storeroom of a bland department store while the unheeding and apathetic sugar-craving functionary stands guard over the keys next door was a bathos I enjoyed, and there are plenty of other little touches that bring the story to life. The post-endgame present choosing sequence is a delightful bonus, and who would have thought that Santa could be so prescient as to get me my very favourite story from season 16 of Doctor Who? Definite proof that I have been nice all year (the naughty kids got The Power of Kroll - serves them right).

I said above that the game is compact, and that is really the main criticism - the small number of locations and the proximity of the puzzles to each other do make it seem slightly constrained. Timing issues may well have prevented it, but it would have been fun, I think, to have a chance to explore a bit more of the store and the play area (the little bit of world-building that you do in the intro makes me keen to see more) and to diffuse the puzzles over a larger area. For example, the locations of the vegetables and the vase seem a bit contrived (and close to each other) - it might have been better if they were a bit more spread out. But even within its more limited scope, it does all hang together and works well.

[EDIT - on a second playthrough, I see that some puzzles do change, so there seems to be more going on in this small area than I at first realised. I'll have to replay properly.]

Here is the usual bug report / comments  (no typos evident, which I would expect, knowing your day job):

- there are no take or drop messages;

- UNBOLT (the gate) is not recognised;

- there is something funny going on with ‘press any key’s and redescribing, particularly in the first location. Entering 'L' a few times in quick succession (I'm a habitual LOOKer, for some reason) occasionally results in a redescribe followed by a 'you can't do that' type response.  It's hard to pinpoint exactly what the issue is, but it is noticeable;

- PUT CUE THROUGH BARS = "The metal bars is not a  container" [Adventuron's standard 'not a container' response has acquired notoriety for me, due to this recurring issue];

- you have to OPEN the door to the south once you've unlocked it, but you don't need to OPEN the gate to the west once you've unbolted it. I'm not a fan of needlessly mucking about explicitly opening doors, but at least this should be consistent one way or the other;

- I'm not sure how I feel about LOOK UNDER and LOOK IN as a way to find things, above and beyond the standard EXAMINE command. It's quite a retro Zenobi-style thing, and can be a bit frustrating, I think, if people aren't expecting to have to do it (it's equivalent to EXAMINE then SEARCH really). But you do signpost it clearly in the instructions, so players should be aware of it (unless they just dive in without reading instructions...)

- the dynamic graphics are good, but could we have something for when Santa eventually escapes from his prison?

And that's the lot.

In summary then, another strong game in an impressive field of entries for the jam. Well done!

Thanks for your very thorough review Christopher!  I'm glad you enjoyed it :)

Adorable little game. I can't remember when my daughter was 3, but I do remember her running off in malls. Hah. Not fun.

Anyway, cute game and I enjoyed the extra part at the end as well! So cute! Now I want to put that in my games! ^_^ Good job!

Glad you enjoyed it Errol!