Something resembling a hero game.
Submitted by Captain Dreamcast (@CaptDreamcast) — 2 days, 23 hours before the deadline
Add to collection 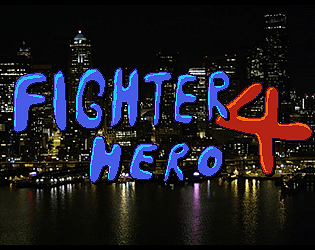 i wish my dreamcast would work to test it out that is such an interesting ideal!!

Thanks for testing it! I'm glad you liked the cat carrier, 1000 hours in paint etc.

The Dreamcast version has even more issues than the Windows version, so you didn't miss much except everything being 30% slower and a lack of sound effects.

The actually fighting is pretty nice, but the AI seems weak because I won. Because I've never played a fighting game in my life I expected to get beaten to a pulp. I'm pretty happy I won, though, so I won't complain too much.

Yeah, the AI is still pretty non-existant. There's a difficulty selection in the options, but all it does is increase the frequency with which enemies attack. As long as you have that crouch kick mastered you can win against even the strongest opponents. Just like in real life (probably).

Either way, thanks for testing it!

Haha, holy shit, the game is funny, thanks for the laughs.

The old man kicked the shit out of me twice. I'm not great at fighting games, but this was fun.

I'll second the characters being good though. I like the kid who just hits anything in his way.

It plays pretty well, save the AI not really being all that great. Bald guy's super just kind of froze him in place and lagged the game until I hit him again. Also when playing as him you can just spam attacks against dark testament and he'll never attack you.

I wish there was a "perfect" prompt for winning without taking damage, but that's not really a complaint.

As Linnu said dialogue really needs a button prompt because I was confused for a minute, but I figured it out and had a fun time playing it!

Thanks for testing it!

Yeah, the AI still only knows how to press random buttons, it's pretty much like playing against me. The difficulty setting only makes the AI push buttons faster, so once you have a move the AI can't deal with, you've basically won. There's a small green P over the victory icon when you win without losing health, but I still haven't looked into some PERFECT or FLAWLESS VICTORY like you'd expect from something like that. I'll also add a little bouncing A to the text box next time, I wasn't sure before whether I wanted to add some animation that plays when you can advance the text, but I see that it's really missing here.

Characters were cool. I liked the blue man the most - his dedication echoed throughout my apartment building, lol. I liked the aesthetics. Although I wished that it would be possible to go fullscreen on windows.

Add a button promt during cutscenes. It took me some while to find out what button advances the dialogue. Also the game crashed whenever The Leader and Kitty were about to fight.

>Also the game crashed whenever The Leader and Kitty were about to fight.

Wow, this was the most obscure thing ever, the debug build treated files with japanese characters in them s l i g h t l y different, so it worked under debug, but not the final release build (which I don't test dedicatedly, because I assumed there wouldn't be that much of a difference except some speedups). I uploaded the debug exe now. Thanks for pointing that out, I'll be more careful with that from now on, wow, really didn't see that one coming.

There is actually a fullscreen combo under Windows, it's CTRL+Enter, I've added that to the description now. A button prompt would be a good idea too, you're right (A bit too much to just fix it like the other stuff, but I'll keep it in mind for next time and add something to the description). Thanks for testing it and the loads of helpful feedback!