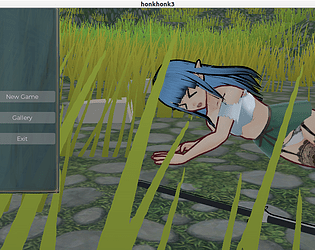 I'll start with the bugs I found: I won my first fight against an elven patrol with zero units, and even got a gold for that. That happened a few times. Additionally I once froze after leaving the pub, I don't know if that was the same bug onimu had, but I don't remember pressing escape. The pub only seems to load in for me the second time I enter it, the first time I just keep seeing the world map. Arrows seem to get stuck in the battle screen, when fighting an elven patrol after razing a village, arrows are just standing still in the air. One village levitates above the ground, the second one  down to the left.

Gameplay-wise, I think the reason everyone believes fights are unwinnable is because the text says you should attack the villages, but villages have those invincible archers, so the better approach is to pick off the patrols first and zerg-rush archers later. My original gold goal was to win a battle against a village and, by the orc god, did those elves pay once I had 20 troops under my command. After realizing that the village literally goes up in smoke, and that being pretty fun, I went around to destroy all the elf villages, until I realized they respawn. After that, I accepted that my 34-troop army had become pretty much gamebreaking and called it a day.

So yeah, balancing-wise stamina doesn't seem to be much of an issue yet, as it refills faster than I can spend it on converting captured elves. Since troops don't (really) die, you end up with a massive army, though I assume in the final version they'd stay dead, which would amp up the difficulty significantly (not sure if I could have won like that, since I always seemed to lose half of my troops, even when overwhelming the enemy). It's really fun, I said it above already, but burning down elf villages is immensely satisfying.

Lewd mount and blade is a great concept and this is a great start. I couldn't win a fight for my life but I can see where this is heading and am exciting.

It's kind of hard to find villages, doing something like having roads (at least to the first few villages to teach you where to go and what to look for) would help. I also couldn't rotate the camera once visiting the castle town, and I had to press Esc to get dialogue at the bar to progress at first.

hitting escape seems to cause some problems. while on horseback it just froze my horse in place and I couldn't do anything--had to reset. while fighting it freezes your camera in place and you can't attack anymore; had to alt tab out and in to fix that. also the AI just kind of stands around and looks at you if you walk far enough away.

when elf girls die they just kinda fall through the floor.

The capture heart is huge and hard to see through.

where does she put that sword when she puts it away????

I can't fight for shit, everything just beats my ass immediately.