Dark secrets lurk between the bits of this console
Submitted by Firgof — 2 days, 9 hours before the deadline
Add to collection 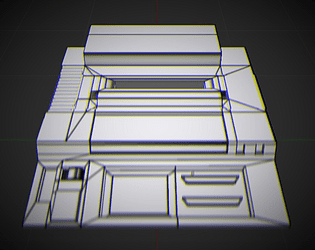 Very cool and climatic. I got stuck in SYSTEM GES menu as well. Managed to bring up SIREN DATA and LEXEMICS but can't seem to get further than that. I really like these glitchy, sense overload, SADWORLD style things.

I think not knowing what was a bug and what wasn't makes for a really cool experience. One thing I remembered was the third ball jumping stage, my ball was stuck in float position, if that wasn't intended I was spamming jump in previous stage near the end, that might've caused it.

That's an intentional bug, yar, but it's also bugged somewhat ironically. What's meant to happen is that you get a bit of the ways in to the next level while being stuck in the air, and then the system crashes (so long as you're not in the inverted parts of the program). If you were in a white space and were floating, that's an actual bug. If you were in a reddish space and were floating, that's an intended bug-feature.

Being stuck in the air in the negative worlds is how you'll access sub-worlds of that particular program as it won't be possible to jump in negative worlds once that program's logic is done.

Sorry about the GES menu being bugged; it's a side-effect of the new interaction system. There's some interplay going on where inputs are being fought over by the standard player controller, the player interaction script, and the interactionRegion which boots up the SNN menu in question presently that I've yet to completely sort out.

Name your folders, DD21 build tells me nothing among the others (also New Unity Project Configuration). I'm not reading the greeting wall of text. The button at the bottom to start the game is not obvious. Thanks for having Alt+Enter. There's no "Pause" menu, which, along with sounds still playing on alt+tabbing, is horrible. "[E] Credits" doesn't do anything. I don't like having 50% of my screen masked and the other 50% having a grainy filter with 1m of visual distance. No mask would be fine. I wanted to change the mouse sensitivity. [E] doesn't do anything at all until randomly it does, then 3 screens change and I'm with a mask somewhere else again, which is too random to get me to be afraid. Saw a light in the second room, ran into a corner on the opposite side, it disappeared, ran around the  room with the columns for good 2 min, then fell off somewhere into blackness. Also no way to exit the game or minimize.

There's potential after some heavy reconstruction. Judging from the other comments, though I haven't even played the game yet.

Yar, most of the ingame menu stuff isn't functional at this time. I focused more on the core assets and gameplay to get a single, complete, gameplay loop in before I started putting in the player menu, intros, polish, et cetera. The locked regions don't presently display their locked message, which results in nothing happening when you hit E on them; sorry.

The IG Menu is liable to send the player back to the Main Menu room while saving their previous position and scene to allow you to access options by the WoH-computer desk. I might need callouts for a couple of seconds over those positions just so the player knows that they have to move around the room to access various parts of the game.

Thanks for checking it out and the resulting feedback though. I've added your feedback to my devlist to ensure I don't forget any of it.

Seconding the menu of doom, it got me as well. Should have read the comments, but I didn't want to get spoiled.

The atmosphere works pretty well for me, the only section I found a bit uninteresting as it is was the funrunner ball minigame, because it builds up this tension that something is going to happen in the last of the three levels, but never really does anything special, except the level number/name glitch in the beginning.

The visual presentation is 10/10, those are some fine visual effects. Like the "invisible" platform, that's the kinda thing that makes you go "how cool" when you finally see it and figure it out (took me a couple minutes). And of course the glitches. I'd like to see where you're going to take this too, I thought the idea of a corrupted game system is cool.

Very curious about people's paths through the demo. What did you see? What did you do? (What broke or got you stuck?)

After the "mini game" ball jumping thing, I got stuck by turning around and entering some menu which I couldn't exit. I really enjoyed it up until then though. I'll probably come back to this at some point to finish it. The atmosphere and feel you set up is really interesting, and the aesthetic isn't something new, but you take it far enough for it to feel fresh and interesting. I was pleasantly surprised by this project and hope to see you complete it.

P.S This isn't a prototype. It's an alpha, a prototype is a test to see if the core concept works or not. very often with simplistic graphics. With heavy focus on the mechanics. This looks more like it's in the alpha phase, AKA feature-incomplete and buggy.

Calling the whole thing Prototype might be underselling where it's at somewhat, yeah. I'm still not sure how hard to push the Diagnostic View mode's filters and its gameplay at the moment (how difficult was it to walk the corrupted path down to the Core Memory portion of the tutorial scene?) but it is more than just a framework as-is I suppose.

I look forward to your impressions as the project develops. There's a lot of ground to cover (for instance, the entirety of the introduction isn't in right now) but I hope to finish it up with 1-3 hours of gameplay.

Once I understood that I just had to look for the next light, it became a very straight forward exercise. The 'invisible' path was brilliant! I really like the screen effect you used here. It feels like the invisible road appeared at the exact moment that following lights scattered about became stale, which is a testament to good pacing. Following down the path wasn't hard at all, but it became a little boring by the time I'd reached the bottom, as I got used to the effect. I don't think just shortening it would do it any good though. Perhaps making it more of a challenge to descend the path could solve that issue.

Spoopy, can't play FPS horror because i'm a puss. But it seems solid.

How far in did you get?

Just enter in the register and then i got panic