After two years of study, you are ready to start your witch's apprenticeship.
Submitted by Garry Francis — 1 day, 9 hours before the deadline
Add to collection 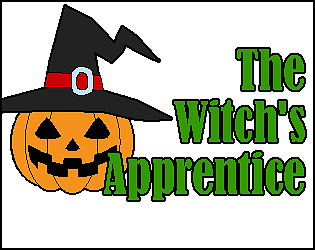 Hehe, this was a fun game to play. I liked the feel and the graphics. The text is lovely and playful.   Unfortunately I just couldn't figure out how to solve the puzzles. Perhaps I wasn't using the right words.      Definitely maximum score for the graphics! :)

Submitted
The Castle of Death
LikeReply
Garry FrancisDeveloper2 years ago

Tell me where you're stuck (or which ingredient you're trying to get) and I'll offer some hints. It shouldn't be a guess-the-verb issue, as it has a large vocabulary and the verbs are pretty straightforward.

Loved the feel and the graphics on this one and thought I'd got off to a good start getting the moss but then struggled with any of the others.  So many rooms and objects plus a limited inventory meant a lot of walking around trying to figure out which one to do next and where it could possibly be.

Nice atmosphere and writing, felt a little bit like Terry Pratchett and Douglas Adams in places and the graphics gave me a nice Manic Mansion vibe!

Stick with it. There are lots of in-game hints. If you've drawn a map, it might be best to concentrate on one room at a time. Examine EVERYTHING. Most of the ingredients are staring you in the face, it's just a case of working out how to get them. The puzzles aren't necessarily easy, but the solutions are always logical.

I also got a Maniac Mansion vibe!

One can't deny that this is the mother of all oldschool adventures. It is heavily based on puzzle-driven interaction by manipulating objects, which is very contrary to my own way of writing games based on progress levels that cause further moving on in a linear story. Which is not a bad thing, just a different approach. What you did here is a solid effort that draws lots of inspiration from the 80s counterparts and therefore pretty much comes with lots of vibe those games were famous (and also infamous) for. I think Chris will enjoy this game very much.

Personally I liked playing it, even though I would like to mention a few things that I encountered "along the way":

1) Backpack: when you try to EXAMINE it, it tells you what's inside, which is fine. When you then try to LOOK INSIDE BACKPACK the game tells you that "The backpack is not a container." which is very confusing for the player. I'm guessing this is the standard Adventuron reply to an object that really is no container, so my suggestion is that you override this reply for the particular object to avoid any confusion.

2) Maze: inside the house, navigating to the different locations had a very maze-esque look and feel. I don't like mazes in adventures so that was not my cup of tea. I also felt that if you do a maze, you could maybe make the pictures a bit more different than just changing colours. I know this is too much to ask for in the time we had, but the identical pictures hardened the maze feeling in me.

3) Objects: Personally I felt overwhelmed by the objects you need to interact with. This is generally not a bad thing. For people who are into object puzzles, this can be heaven. I for myself found it hard though to see the "masterplan" in-between all those objects. I also have a feeling the amount of "red herrings" is too high in this one. Again, nothing bad with red herrings, I have one in Rabenstein too, I'm just reflecting my own preference and experience when playing the game. The last thing I'd like to mention regarding objects is that I felt with the massive amount of objects you can interact with, the limitation of items that could be carried felt like an unnecessary extra level of difficulty. That I was still wearing a backpack (which was not suitable to put some things in) didn't force me to cheer when the message that I'm carrying too much stuff appeared :D

Anyway, this is a very nice oldschool effort and without doubt you put much work into this, which you can feel when you play the game. It needs to be mentioned that I also loved the graphics. They didn't feel like quickly made, they actually felt very polished and give the game a professional look. I'm absolutely looking forward to your future efforts!

Submitted
The Curse of Rabenstein
LikeReply
Garry FrancisDeveloper2 years ago(+1)

Thanks for the feedback. I can only say that it's hard to please everybody.

1) I didn't even know that you could LOOK INSIDE something. As the rules state two-word input, I didn't really expect anybody to try that. Now that I know it's possible, I'll have to work out how to handle it. (Chris? Are you out there?) Remember that containers aren't currently supported.

3) This is one of the problems with illustrated adventures. When you add objects in the illustrations, you have to account for them in the descriptions, otherwise you get criticised, like I was for the decorative candle in the master bed chamber. I loath adventures that provide long verbose descriptions like they're written for a novel. Every time you enter a room or refresh the room description, you have to wade through half a screen of text, but you can't examine or interact with anything. I much prefer the "drill-down" approach, where you gradually expose new information. It is more satisfying for a user to feel like you're exploring and gradually making progress with each new discovery. However, I do confess that there are far too many red herrings, especially scenery. Sorry about that. That's because I Googled house plans for Victorian style houses and essentially designed the house layout before the puzzles. And it's no fun having lots of empty rooms. There's actually not much to do upstairs, but there is one essential item and lots of funny responses. Hopefully, that adds to the enjoyment. Incidentally, the 5-item limit is somewhat arbitrary, but it prevents our 14-year old young girl from carrying around a truck-load of items and forces her to make at least two trips to the basement. I think they're reasonable requirements that add to the realism. When Adventuron adds containers, I'll allow Susan to put things in her backpack.

When I somehow tried to handle the Rucksack as a container I got the reply that I rather should look inside. Did I try to open it? Mmmh. You may try LOOK INSIDE BACKPACK for yourself and then see the result. Not sure though what triggered the first reply of the system that I rather should look inside the backpack. Anyway, if it is not added by you, then this is a system reply and you should get in touch with Chris to take care of that. Maybe it is documented somewhere, in the obj. ref?

Regarding the maze-feeling. I know that it was not actually a maze, I'm just expressing how it felt when you were wandering through the same-looking, different coloured transition rooms of the game.

Yes, having a 5 item limit may be realistic. I was more after logic with my hint. We all can can't barely carry more items with our hands than 5 or maybe six until it starts looking like a circus performance. But we can carry a lot more items with a backpack. So the player will think: hey what's up... just 5 items? I'm wearing a backpack! So you either should take the limit out or allow to carry more if the player is wearing the backpack. That would be a way to work around the issue that Adventuron doesn't support containers yet. BTW. you could try to replicate DAAD's logic of containers in code, where a container is just an inaccessible location. It uses then the LISTAT condcat to read the contents of the inaccessible location as container inventory.

Like I said, you could just make more objects carriable when the backpack is present or just leave it out. It’s about the logic, not the technique behind it. Also, the game encouraged me to look inside the backpack and then I got a reply that it’s not a container, assuming these are system messages, that’s on Chris todo not on yours

I took the cheese from the fridge, and dropped it on the floor for the rat, also dropped the fruit. The rat did nothing. Maybe a message if the you are beside the rat and cheese / fruit ?

The fruit was a last-minute addition, but good suggestions. I'll include this in the next update, hopefully within the next day.

The number of scenes and objects in this game are expansive. I love the graphics, but I feel like they are sometimes at odds with the description of the scene.  Currently stuck and wish I could get a candle I see in a bedroom.

The candle in the bedroom is not lit and you won't find a match to light it. It's only background decoration. However, there is another candle that you can use. You've already walked past it.

Some great puzzles in this one!  Nicely challenging.