The Castle of DeathView game page

There's been a murder and you're suspect #1. Can you figure out who did it?
Submitted by Dark Blue Monkey (@DarkBlueMonkey)
Add to collection 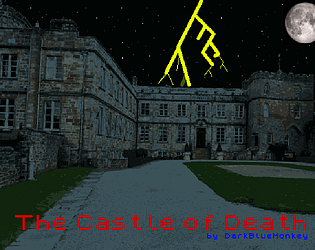 The Castle of Death's itch.io page

Big big game, a murder to solve, a lot of place to visit and examine. You really need a pen and a paper to map your way around.

Very fun, the HEP STUCK helps a lot because the game is big and sometimes, you can get lost in exploration.

This game is HUGE! I haven't finished it yet (found over 50 rooms and filled about 4 of the 6 pages in the notebook), but I've played enough to get a good feel for it. The descriptions are very good, but all the atmospheric background messages start to get a bit annoying after a while. I was disappointed at the huge number of essentially empty rooms, especially when I couldn't examine anything that looked promising in those rooms. There seems to be something strange going on at the secret woodland path. The first time I played, I discovered a spade. The second time I played, I discovered a knife. Wha? I'm not sure whether this is a bug or a puzzle, as I haven't worked out what's going on yet. There are a few other bugs too, but nothing monumental.

This is essentially a murder mystery. I don't normally go much on murder mysteries in adventures, but this one is very well done. I'm keen to finish it now to see who committed the murder. I don't think it was me, but who knows...

:-) Thanks for the feedback.    I have trimmed a few of the rooms down.  They didn't used to be empty, but another reviewer told me to take out all the extraneous stuff that wasn't pertinent.

I'll perhaps trim a few more rooms then.. I can think of three or four that serve no purpose.

The game is actually randomly generated each time.  There is an overarching story, think of it like "An inspector calls", where there are many suspects.  The game will choose to show you one 'facet' of the story each time you play through.  You can see if you can work out the whole story from that facet (there's all the information!), but you found a different murder weapon, and it might be in a different place because each time the murderer is different, and how they did it might be different too...  All the suspects want him dead, including you!  But which one got to him first, and how they did it, that's unique to you to figure out... But once you put it all together, you should get a good idea of why ;-)

I'll take a look at the room list, and trim some stuff down further......

Thanks for the feedback!    The game's huge by the jam standards, but it's about average for a full-sized text adventure.  Maybe Chris should have given a size hint as well as a theme ;-)

Ah, that explains it. I hate random games. Most adventurers do. No offence, but it makes it really hard to write hints, walkthroughs and solutions. Now I've got the extra challenge of working out which parts are random. Sheesh. Nevertheless, it's still a good game. Very atmospheric descriptions.

Hehe, that's what I was going for.   The randomness won't create anything that's illogical, everything is strongly bounded to be internally consistent and each potential solution  fits into the overarching story.   So if you found a thing in a place, there's a good reason why it was in THAT place which you need to figure out. It's a murder investigation, after all :)   Let's just say that, each time you play, a different person got to him first, and that includes you.....  It's only random insofar as you find out who was pushed over the edge first...   But there's a darker story underpinning it too, if you want to try to work that out, there are clues....   :)

I'm in the middle of stripping out some of the less-useful 'connector' rooms, and I'm adding some descriptive text for some of the scenery objects to trim it down.       I'll upload an update in about 10 minutes (you'll need to restart your game if you want to play on the reduced map).  There are about 5 or 6 rooms which I added for a particular reason, which seem a bit empty at the moment..... ;-)

Great graphics and a really spooky atmosphere but apart from stoking the fire and washing my hands I just found myself wandering around somewhat aimlessly not sure what to do and having far too much to explore while I figure it out.  Some amount of fencing the player off until they've done some of the starting tasks and guiding them along would go a long way.

Definitely had me feeling uneasy as I moved through the house unlike most games!

You're not allowed to go downstairs until you've washed your hands, which forces you to explore a little, and you can't escape the castle until you've hunted about for an item (or preferably you're doing some investigating).   It's a murder investigation!  What would Sherlock do? (and no, the answer is not 'Opium'  ;^)

I’m so  accustomed to small maps so this game was super fun to have so much freedom. It also felt a bit unclear what I was to do with any of the many items I found. In several cases, directions that were listed that I could go in weren’t available even when a door was closed. Great mood and setting. Definitely spooky!

You can start opening doors when you find the butler's keys.

Generally a nice effort. There is plenty to explore and you definitely need to draw a map to not get lost in this one. I played Garry's game before which had a certain maze-feeling when wandering in the house, now that I played this game I kinda felt I had a Deja Vue. It generally is part of the anachronism of text adventures so there is generally nothing wrong with it when you're into that kind of game design. I enjoyed the look and I especially felt story and spookyness are great in this one, the level of gore might be a bit too mature though.  Anyway, great adventure you crafted here.

One thing I'd like to mention is that when you turn off the graphics at the beginning of the game by pressin 2, you don't really turn off the graphics. The graphics appear, but they do so below the object list. I've added a screenshot so you can see the issue. My guess is that this is a bug and not intended by you. I can't see why anyone would want to play it without graphics, if you do so, it should work :)

Hehe, aye,   Well, funnily enough, the house is a straight East-West main corridor upper and lower, with rooms on the "H" arms, I made it so you could actually test all the exits by just moving like a gearshift from the central location :)      It's a feature of games that houses are always East-West with the entrance in the middle on the south side.  It just always seems to be this way.  I've even played games where they were modelled on real life, yet when I asked the author about the 90o rotation, he just said "it felt more natural to enter by going North".  So, despite the strangeness of having the patio on the north side of the house, which would suggest a southern-hemisphere location,  I just went with the flow :)

Chris is working on the auto-map feature. I plotted out all the locations to work with the automap, nothing should clash square-wise.  But that feeling of being adrift in a big house, not know where you're going, and the clock ticking, it what I was going for.  You really do have only a certain amount of time before... things.. happen... So you need to just push through your fears and get searching :) hehe

Cheers for the feedback :-)

The tension in this game is brilliant!  Good map-drawing exercise too, though there are maybe a few too many locations.

I know who did it, but I couldn't find enough evidence to convict them.  Maybe next time!

Thanks for the feedback.  I'll have a look at trimming some of the less useful locations... There's certainly a few locations that were added with more options in mind, and more places to run to if you needed to get away from.. things..  I'll have a look and trim a few out!  Thanks :)

Thanks again for the feedback, it was much appreciated!