Race to see how fast you can clear your office from violent giant squirrels.
Submitted by Eltucke — 52 seconds before the deadline
Add to collection 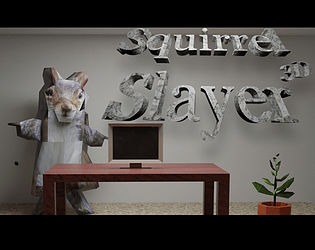 God must've been really pissed by that one guy who was hunting and stapling squirrels.

This was a fun little romp! Xteenth suggestion that R should be a gun reload and not to reload the level, Xteenth post about how the intro was absolutely hilarious and it almost threatened to take over the entire stream playtime of this game. This is an absolutely wonderful foray and I loved it. Very well done, and good job!

R is usually reload. Only way to reload is to empty your gun. There's also no ammo counter to let you know. As other have said, probably not a good idea to make that restart the level. I'd put that into some kind of ESC pause menu, where I can set volume and stuff. Maybe add some squirrel death sounds...

Anyway, I really liked it. It's a janky meme-ish kind of shooter. That intro video definitely sold me on wanting to play all the way through to the end. Tied it all together. Kinda wished it wasn't 1 hit death, but, it's kinda part of its charm that it is.

Great low-poly models. I’ll be the third or fourth person to say that ‘R’ for restarting the level definitely killed a few runs for me though!

really digging this - though the shotgun-wielding maga hat-wearing tree rats can get tae fuck lol. especially that one standing around the corner near the beginning of the second level - i think over 90% of all my deaths were due to that one horrible, bad, no good squirrel

i do feel that the 3d scanned look of everything, the weird physics and Godot's, uhhhhhh, commendable but kinda funky-looking effort at rendering lighting only further enhance the overall vibe of this game and all should be left untouched should this become a full title

I really hope the call was improvised--it's really well done! part of me wonders why it isn't just playing during the game. and the lip sync is definitely underutilized--too good.

I enjoyed the level of difficulty. the final map feels a bit thrown in but the second one was tons of fun, with just the right amount of length and punishment. combat felt straightforward and satisfying. tapping has immediate feedback. genuinely had a good time.

the visual style teeters on the edge of being really good. there are too many objects that seem inconsistent and clash--like the revolver--and the lighting needs work, but I was really sold on the squirrel meshes and the possibly unintentionally awesome low tickrate physics. the combination of the derezzed photogrammetry and the stop-motion physics really has some potential to sell an awesome look, I think. paratopic comes to mind?

Thanks for the feedback! I wrote the majority of the call but left spots for my friend (comedian/voice actor) to improvise and  make it feel natural, and oh boy did he.

Interesting feeling you got about that last map- trust your feelings. I wanted to make sure this was a super short "game" and not just a single level experience and was using the third map as  a sort of physics test to see how many simultaneous objects my computer could handle and decided: for a game made in a week I'll just throw it in. I think if we update the game sticking to  office interiors that are architecturally accurate would be an emphasis. Like, where is the elevator in this world? Bathrooms? Storage closets? The true mystery of Squirrel Slayer3D.

I'm curious about your thoughts on lighting. I was thinking about adding a 'lamp' fixture to make more diegetic light, and some of the lights themselves should be placed more accurately, but did you feel the game was too dark? Too inconsistent? Lighting wasn't realistic enough? I did a lot of experimenting in this regards and would want to get my formula down pat.

For the revolver: I felt uneasy about putting guns in the game, or even just making a game that had the player shoot a gun, so while adding a nice PBR texture to the revolver was on the wishlist (as well as other weapons of course) I left it sort of stupid and comic looking for my own insecurities about publishing things with firearms. Shininess would help it play much better though.

great job (both of you), in that case!

just cleared the game again. still fun! I appear to have improved in my sleep, as well.

it depends on the tone you are trying to set [with lighting]. on the one hand, it feels dark in an unintentional way. on the other hand, I now associate the feel of the game with how dark it is (and I like it). there are some parts of the map where this leads to readability issues that are probably too egregious to ignore (stuff you just can't see) but all in all it's a personal design choice. there are no wrong decisions.

realism, physically-based rendering, etc. would seem to clash somewhat with the 'shareware' direction you have cooking. baking vertex lighting into your meshes and leaning into photogrammetry seems like the natural next step--this is why I brought up the revolver: it's one of the few untextured and unprocessed assets in the game (or it at least appears to be), which makes it stand out.

I understand wanting to avoid guns in general--it's something that many of us are feeling these days. at some level it is difficult to overcome the fact that your game somewhat centrally features a firearm in the workplace (i.e. this might be one of those 'lean all the way in' or 'run away screaming' thematic/tone decisions). however, one of the things you can do--if 'comic looking' is indeed your goal--is mess with proportions. the current asset is essentially a scale revolver.

probably the most significant observation I have re: the lighting is that it appears largely to be direct (and quite harsh). you have many light sources, but not much indirect lighting (i.e. not much bouncing, and therefore not much diffuse light). this leads to patches of absolute dark surrounded by patches of brightness. you can resolve this with some kind of GI solution, baking/lightmapping, or just by adjusting your ambient. the latter is the fastest trick in the west and will probably get you more bang for your buck, but given your visual style, baking would seem to vibe more. all this stuff is up to you--how do you feel about the lighting? given that this looks like something from the early 2000s, you might want to go see what you can steal from the era.

This was our first time developing with Godot, and using a GI probe on the map has three different lighting settings to juggle: dynamic range, spread (or something like that), and energy. There was always a 'notch' in the settings that would separate the lighting from being bright and ambient to dark and shadowy. For this game I picked dark and shadowy, however I think bringing the energy way down and the spread up might bring out some of the finer details and split the difference a bit. Also Giant Killer Squirrels coming out of the shadows was sort of freaky to us and we liked the darker vibe.

On a tangent, I think Godot 3.4 is mainly focused on 2D applications and the support has been focused on that aspect of the engine. We encountered some strange hiccups in the 3D world, mainly around lighting and physics, but overall liked the quirks or at least found ways to make them fun.

Thank you for developing the nice game! Level and game designs are neat and cute(?)! And I envy the aim is accurate to shoot the exact center. By the way, when the player died more than twice, it sometimes stopped the screen without restarting the game level.

Damn this game has a lot of physics objects flopping around.  I also pressed the R button to reload my gun LOL.  What method did you use to model these characters?

The shooting felt pretty tight and had a nice kick to it.  One suggestion is I would make the bullets (but especially the enemy fire) more visible.

Yes, we took "Reload" in a more level based literal sense... I used Blender to model, texture, and animate everything except the office maps themselves which started in MagicaVoxel and then went into Blender to get cleaned up and textured. Adding a sort of 'tracer bullet' effect shouldn't be too hard. Thanks for playing and the suggestion!

Seriously the best title screen ever. The squirrels are some sneaky bastards.

Keep wanting to hit R to reload and ending up restarting the level haha.  Great game.

Hey that is an interesting note for the game design, we wanted to show how much ammo is remaining in the clip and adding reloading seems like a basic FPS addition. Perhaps switching to a pause screen that allows restart would be cleaner, and adding a less used key for a fast restart would be better. Thank you for your input! (And for Good Day 好日子, omg)

The intro alone has me rolling on the floor laughing. Was completely caught off guard, and I'm listening in disbelief as it's still going after 5 mintues xD

I really liked all the sneaky squirrel ambushes, and the incentive on scanning the rooms quickly. I got some nice Hotline Miami vibe from one-hit-to-kill and fast paced gameplay.

Glad you liked it! Because the game is short for a game jam we decided that 'one hit kill' level of difficulty would make each level a challenge. We are wondering whether to expand the game and add more levels that follow an office building's map a bit better, more voice acting/animation, different weapons, and turn it into a full fledged micro-release. There are some inside jokes in the game now that could use some polish, such as my favorite: the singular "Option" in the Main Menu.

I think one-hit-kill combined with short levels and ambushes was a great choice. Because you don't lose so much progress when dying, the game can be more punishing without being frustrating, and the player can feel like a badass once they memorized the layouts and enemy spawn locations.

I'd be super interested in a micro-release, as I'm super sold on the humor and gameplay. I had a friend that found the bugs in a closet, and for each one decided to kill or spare depending on the message on their signs, was hilarious.