A NSFW RPG about exploring a fantasy world · By

I thought this would be a good place for people to put glitches/bugs they find since most, if not all, don't know if there's a Discord server.

I don't know how to take photos, but for when I choose to adopt the doggo, the last thing said which I assume is supposed to be the, "You got" and then what you got, so this is what it said, "<color=green>Doggy has joined you as a companion!</green>" I don't think this has happened to me before, but just thought I should let the creator/s know.

Thanks for telling me. Appreciated : ) I'll get that fixed in the future version

Perhaps an option menu could be added that includes an option to play the game in window instead of Fullscreen? It becomes a bit of a nuisance that I have to resort to Ctrl+Alt+Supr to be able to close it...

Hey PageAngel - Fullscreen should turn off if clicked again in options. If it doesn't do so, we've got a bug.

The option to toggle full screen/window on/off didn't showed up when I played. Maybe it was a bug?

Could be a glitch or something. Anyway, does it work for you now? : )

I haven't had the chance to play it again. Will let you know when I can. :)

I see you responded but I think my question is now gone ?

anyways when I press new game the screen goes blank , can you please tell me what to do again as I didn't see your response before it was deleted . 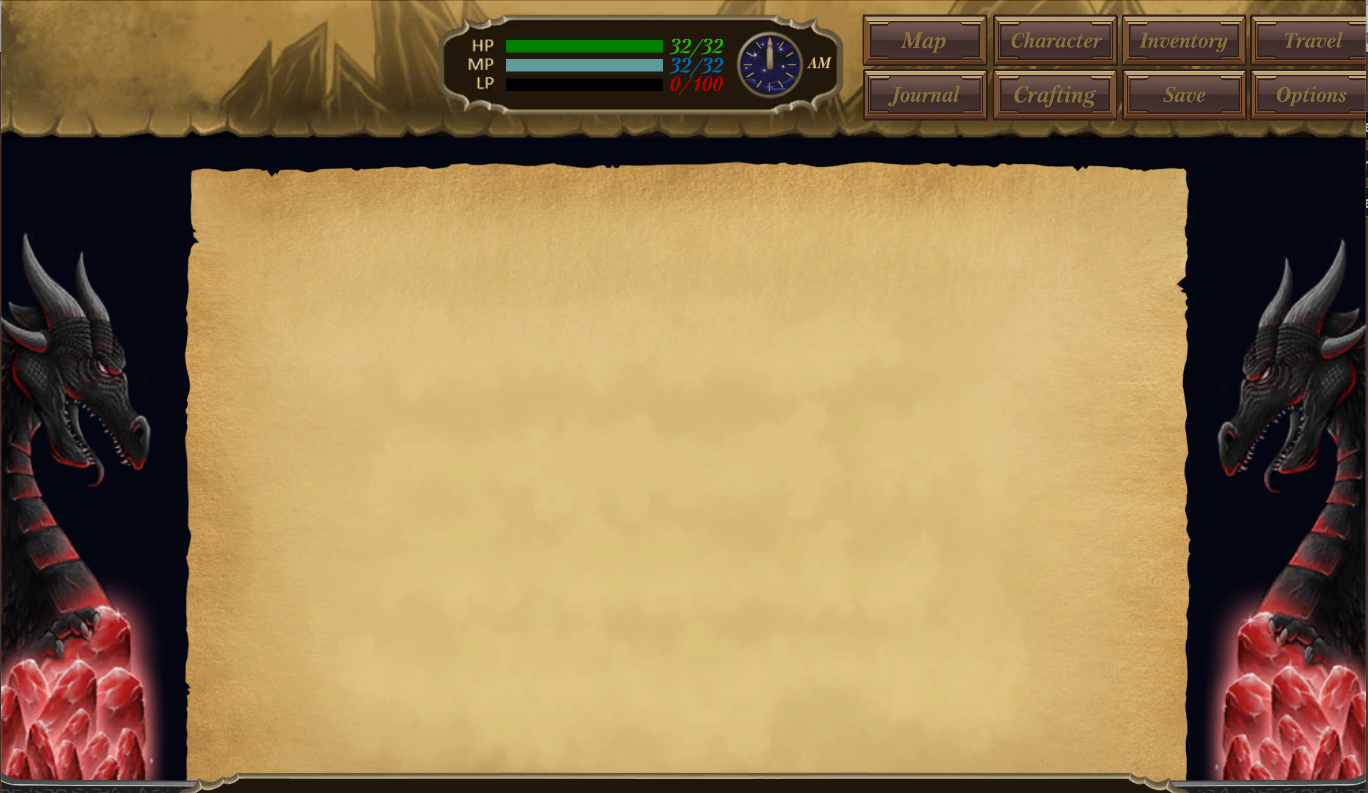 What do you mean!? When was I a jerk? I was just saying that you don't have to be so harsh without all the facts, and you started this whole thing by saying how much of an "asshole" the creator/s are. If anyone is one, then you are.

after reading your comments,

I would totally ask for delete/report for spam too.

What you do is not helpful or in any way tactful at all.

You are just insulting everyone, who don't agree with you.

I partly agree with you, and here's why it is partly and not completely. Marlowe is being mean to the creator/s for a reason he finds... Unreasonable, which is okay to think that, but he started calling them an asshole/all of them assholes for merely deleting a comment he think's shouldn't have been deleted. Now here I am trying to defend them, and I do agree with the fact that we should just delete this argument, but I will only do so when he deletes his parts. I will not stand by and let him insult the creator/s like this. So I will keep my counter-arguments that help show that the creator/s are nice people and listen to our problems we are having with the game.

1st off, I said ALL the facts. 2nd off, I said a glitch/bug that seemed very irrelevant and stupid yet the creator/s not only left it, but replied to it that they would fix it. So you can shut up already about them being jerks and you knowing every single fact when clearly you don't, and let me repeat it in all caps, YOU DON'T KNOW ALL THE FACTS, EVERY SINGLE FACT that led up to them deleting your comment.

Malowe has been blocked due to being aggressive towards others - let's move forward from here : )  Thanks for the kind words back there earlier, CutieWithABooty.

You haven't been aggressive to anyone, huh? Let's just go through your replies/comments real quick.
"Disgusting piece of shit."
"I said nothing about anyone until you and the dev decided to be complete fucking pieces of shit."
"Shut the fuck up."
"They are a complete asshole."
"You cannot know whether or not I knew all the facts, because you don't know a single fucking one of them. You are preposterously fucking stupid and a complete asshole."
"When you fucking told me I don't know the facts when I was literally fucking there and you weren't. I didn't start jack shit."
"They are a complete asshole. Don't support them."

All of these examples is only some of what you said, and only for this game. Lots of people have been calm and rational when replying to you and yet you go off on a tantrum and be aggressive and rude to them, especially the creator/s. Here's some more for the little cherry on top for a, sort-of, different-ish matter.
"I don't know how the fuck everyone thinks I'm demanding that devs change their games."
"I do not jump at everyone who disagrees with me. That's what the rest of you are doing. You do realize that I wouldn't be angry at all if you weren't intentionally pissing me off for no reason at all?"
"I have not been aggressive towards anyone. Disgusting piece of shit. I am having to defend myself from everyone else's aggression constantly."
If what you're saying is true about how everyone is ganging up on you, then think for a while about how it seems like everyone is. If you're getting hate wherever you go, then it is more likely it is you whose to blame and not the people around you. So judging from all of this evidence, would you kindly, shut the hell up? I won't stand by and let you harass the creator/s and other innocent people, you can fuck with me all you want, but don't you dare bring other people into this, hate me all you want, imagine killing me if you really want to. I don't care, you'd never hate me more than I hate myself already anyway. Just stop fucking with the creator/s who work so diligently and honestly to bring a smile to people's faces, along with the innocent people who play and get caught up to the current ending/stopping point of the game then wait patiently for the next update so they can have fun and love the game again and possibly even more.

no, actually i reportd your original comment on bisexual tag since you go around on this platform bashing any content creators who dont make "gay" content to you liking. theres several games you've already done this on, i reported your comment about 5 minutes after it was made. stop being an asshat, the world doesnt revolve around you.

Actually yes, you do. I can read your posts by selecting your profile and I have read them. No matter how hard you try, in the end you end up blaming others when it's anything close to related to women and your sexuality or preferences. I don't understand why its these things specifically, and i don't care to know; but you can't cause a very good arguement this way when your history is bare for others to read and view.

When its ANYTHING else unrelated to the topics of having mislabeled lgbtq tags or the MC having relations with women too, you can somehow be super civil.

Apologies Milky - I switched the responses from "comments" to "community board" and it dropped all previous messages :(
Does the game also just go blank when entering "Load" or "Options"?

when I go into options it works , however it also goes blank when I click on 'load game' ...

Okay - Let's try deleting any save files you've got in the game's folder "saves". Perhaps it's something there that's causing it.
Also, where have you unzipped the game to? Perhaps try and unzip it to desktop : )

Hmm, do you have any other computers you could try running it on, to see if it has do with windows settings?

I sadly don't have many ideas left :(

Hello, I happen to have the exact same issue as I play on Linux using Proton, reading the log it seems the game isn't allowed to create the save folder nor the savefile itself, probably because of authorizations. If you're on Windows try running the game as an administrator, on my side, since I don't know exactly why this game specifically cannot create folders when other running the same way can, I'm gonna try getting the files on my own see if it works.

UPDATE: Creating the "saves" folder and making three empty files inside named "save1.ser", "save2.ser", and "save3.ser" fixed the issue on my side, It appears I am unable to write over my own save, something must be wrong with the game's permission :[ .

I'm not sure if this is intentional, but the beer and the red goo do not get consumed when used. It essentially lets you heal your health and mana indefinitely.

That's a bug I'll have to look upon

Thanks for being so responsive to the comments so far! I have a couple more bugs to point out:

Thanks again, I'll keep you posted on more bugs I find

I'm experiencing a bug with this game.  If I swap focus away from this game (such as by using Alt-Tab, clicking another window while the game is in windowed mode, or changing virtual desktops) and then focus the game again, the game becomes unresponsive to input; the game has to be closed and then reopened before it can function again.

From my understanding, this is a common bug in games coded using Unity, and I think it involves the need to handle the API hook for the game's focus returning or something like that.  In case it's relevant, I'm playing this game on Linux using Itch's desktop client for Linux (which is able to run Windows games through the use of the Wine compatibility layer).

This bug is still present as of the latest release.

If you're in any menu before you stumble into combat, iIf you accidentally hit the space bar while in combat, before clicking on any combat button, you will soft lock the game. It'll open a menu, say the Traveling menu, or crafting, or even resting, depending on which one you were in before combat. And since the menu buttons are disabled, congratulations. Hope you saved recently, cause the game is softlocked.

(edit: after a battle, he seems to gain xp normally. xp gauge display error, though: violet/yellow. companion 1's xp gauge displayed wrongly
after looking at #2, too [just looks wrong, though])

3) can't seem to get more crafting xp for armor and weapons (play as human), stuck in 'stone / fur age'

Hey ixltixl
I look into the issues if they're still there, but I hope version 0.3.1 has most fixed

I don't know if it is intended but when asked to input the secret code in the sewers you can just back out then try and enter it again and it will let you through without putting in the code. Granted the code is really simple so I don't know if it this should matter but just something I found. Also sometimes in combat the  companion will attack a already dead enemy, didn't happen often but it does happen.

There also seems to be bug where after every fight you get a blank page with continue written on it and you don't get exp from fights meaning you have to start a new game. Granted this was right after starting  a new game I was going to use for testing some stuff out, so I don't know if this can happen mid run.