Greetings! I've played the game a bit with no big issues. All good so far.  I've focused on simple trading and trading mission. I might try going pirate tomorrow.

Hey there! I tried, it, recorded and wrote a comment with my feedback. And this time I didn't disable video embedding by mistake like I did for the previous game (btw, I've fixed it and now the video should work).

Just like the other time, adding a video so you can check if the player's behaviour is within what you planned.

Disclaimer: I am particularly unskilled at platform games. So, get ready for a lot of noobing around deaths.

As for my feedback, this one could use some polishing too. The first issue I've had (not a big deal) was that the at the start menu, the buttons have their images out of the sensitive area. I had to click left of the button for it to work. At the credits scene, the clickable area is like the button's width away from the image. You can see what I mean at about 0:14 in the video.

It took me a few minutes to get used to the general gameplay, but I did enjoy it. Having two components to worry about (the android and the drone) made it more challenging. You may notice that I've died multiple times because I was actually pressing up instead of the space bar to jump. That's because I noobed out and only paid attention to the drone.

Some other things that I would enjoy seeing in future builds if your team decide to continue developing this game:

- An idle stance animation for the character. Something to make it look alive while you're not moving

- Noob friendly platform colliders. Like those that allow the player to go through them except when the player's feet are on top of the platform. So, they would work as a platform, but not as a wall. At around 7:00 in the video you can see how the wall behaviour can be a problem.

All that said, I did like this game and I think it deserves an extra round of polishing.

Cool! I've downloaded the zip and it ran alright. I can't properly test it now though. I'll get home in about 7 hours then I can try the gameplay :D

Btw, since you didn't code sign your executable, chrome and avast are being picky. I'm uploading the new zip to  Virustotal to be analyzed. I think it's a good idea to always do that before publishing. That way, when people want to be sure the files are safe and their antivirus is just being annoying they don't have to upload the file. They'll be able to see the results from the last test as soon as the hash is calculated.

Greetings! I've tried your game and recorded it so you can check if my behaviour as a player is within what you planned and maybe help adjusting the game for the next builds.

Now, I did notice a few things. First of all, the zip file contains a copy of the executable outside the game's folder. If you run it, you'll get the standard Unity's error message about the missing data folder. It would be a good idea to remove it on the next build so you don't lose audience because they didn't know they had to go into the folder to play.

Second, the colliders could be adjusted a bit. If you notice, most of the times I'm hit, especially by the DeathBalls, it looks like I'm at least 1 meter away from them.

Third, the jump could be completely re-scripted! There are some nice jump codes available that look natural and can be used while moving.

Other than that, the game could use some polishing, but it's totally understandable if you're learning Unity and move onto a new project to apply other concepts and techniques that wouldn't fit this genre.

Either way, it's cool that you took the time to make a playable version of the game and published it.

All cool. Good luck on fixing that. And if you don't find a cause and need a guinea pig, we can schedule some time this weekend to test a bunch of stuff and find out what is broken.

Hey there! I did try to test your game, but I couldn't troubleshoot my way. First, my antivirus was being picky. I sent the zip file to Virustotal to check against a battery of antiviruses and everything was fine, so I turned off the antivirus to test.  I do recommend that you do that too until you're able to code sign your executable. That way we don't have to upload the file to them to have it checked, as soon as the hash is calculated we can see the test results.

I didn't get any error messages, but this is what happened:

Before I pressed enter to start, the console was logging the rendering time. But as soon as I did: 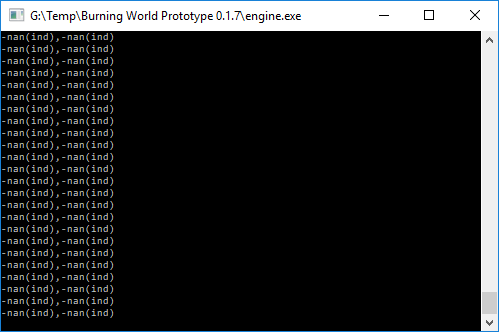 Nice concept! A few things I noticed: The game gets easier if you use the frame count instead of the visual cue to know when to press a key. Sometimes the game would count the key as pressed again before it was released. Either way, it was fun trying to grow a frame-perfect flower.

I didn't get very far, but I think it wasn't that bad for a noob's first attempt.

Excellent game. 6 out of 5 stars. 5 for the game and an extra for the outstanding art. Too bad I could only mark 5/5 on my rating. I particularly enjoyed turning in the magic orb in the chest.

I'll be waiting for a sequel or a larger title with the allergic-to-all potionmaker witch.

Reply
itch.io Community » Game Development » Help Wanted or Offered · Replied to TheOslaf in [Game Tester] Willing to test and/or comment on your game for free
Overgeared Noob2 years ago (1 edit)

Thanks a lot for the feedback! I'm glad that most of the issues you've brought are either part of the design or scheduled to be fixed.

The first issue you've brought is part of the design and the placeholder name Tactical Long Range Booster Redirection, or as  the pilot who came up with the concept calls it in the story, Insane Overheating Mode. They basically redirect the energy reserved for the long range booster into the main system, which causes them to have OP firing rate and agility. As a side effect, activating the shield would cause an explosion. SPOILER ALERT:

The strategic view is planned, but it will not show the whole situation. It will only show the planets, squads and major ships as they reach scanning range of your squad, your planet, a scanner enabled structure or one of your fleet's pilots. Think of a minimap with fog of war that is too lazy to show small things. So, unfortunatelly you'll have to deal with targeting another way. :-(  The good news is that you will have a short range scanner yourself, so you'll be alerted of approaching enemy beams and ships.

The dialogue window is really bad and we're aware of it. Especially the fact that it has a button that steals the input. It wil be fixed. However, the story until at least the final milestones of beta stage is pretty much a placeholder with slight references to the plot itself. The first draft of the backstory teaser has already been published though. I've made a few changes already, but you can read it here (google drive).

As for the turn-based strategy, I'm not saying it is impossible, but it is something that we can't really consider before our proof of concept fails. But we do plan on adjusting things so average players will be able to make their decisions during the fights.

By the way, your opinion does matter! Thank you very much for taking the time to try it out and share the results. :-D

Greetings! I was wondering if you'd be willing and still have free time to help me figure out if I'm making my game too hard. It is still at a very early stage of the Proof of Concept edition. But, since I'm already releasing the current milestone for an youtube challenge, I thought it would be cool to have other people's feedback.

I meant for the gameplay to be hard, but not too hard, since the space shooter aspect is just one of the core mechanics. The player will still have to deal with realtime strategy elements and plot related decisions. All while they shoot and dodge bullets and laser beams.

Any chance you could help me figure things out? The game's name is Twin Planets.

Thank you for your attention