You know one thing that slipped my attention on my initial playthrough but I caught on my second is that the design of the levels is made like its a real place! Take the cafeteria/food storage area, you got the skinning/butcher room and its across from the meat locker and food preparation room and then outside both of them in the main area is the main cafeteria/food storage, my point being you have gone and designed these areas in such a way that they feel real! Like real places with a practical purpose! That is very commendable and adds to the immersion a lot. Even Half-life was never really able to make places that actually felt like a real facility all of the time.

Genuinely pretty solid for being a pre-alpha type thing. The setting and plot especially appeal to me, I think enough so that I'm going to watch this game from this point on. I especially like the little atmospheric touches in the level ambience like the propaganda posters and the alien language and stuff like that. One thing I think needs work on though is the AI which is still pretty janky in this state. For one thing they seem to have real difficulty spotting and/or engaging with enemies at long range. It also seems like the path finding could use some work. I've had instances like the first fight with the big guy enemy type where they kept trying to go through the door that's shut because I chose to go through the door on the right instead of the one on the left and it seems like their pathfinding doesn't account for the doors being closed.

For me its the opposite issue. The game barely registers my mouse at all and hardly moves no matter what I set my sensitivity to. Overriding the high DPI scaling behavior does nothing to fix this either. I would use the keyboard controls if I could but pressing mouse 1 is the only way to attack so it requires me to reach for my mouse whenever I want to attack which is annoying.

You really need to chill out with the death pits. It's enough that you have these white guys who run at you faster than any silent hill 1 enemy ever could and can disintegrate your health in no time at all and the fact that enemies spawn in areas you have already cleared and can move from room to room but then you insist on constantly putting the player next to these pits in every room so they can just shove you into the holes and kill you instantly if you ever try to run away or avoid them. There are so many rooms and areas in this that are just narrow walkways over bottomless pits or are full of holes. Furthermore the edge detection is crazy unforgiving compared to silent hills and it feels like the edge of the end of your shoe needs to merely be around the edge for it to put you into the wobbling animation where as in Silent Hill you had to be at least a half or quarter of the way over for it to count.

I saw! That was pretty fast too, thank you. 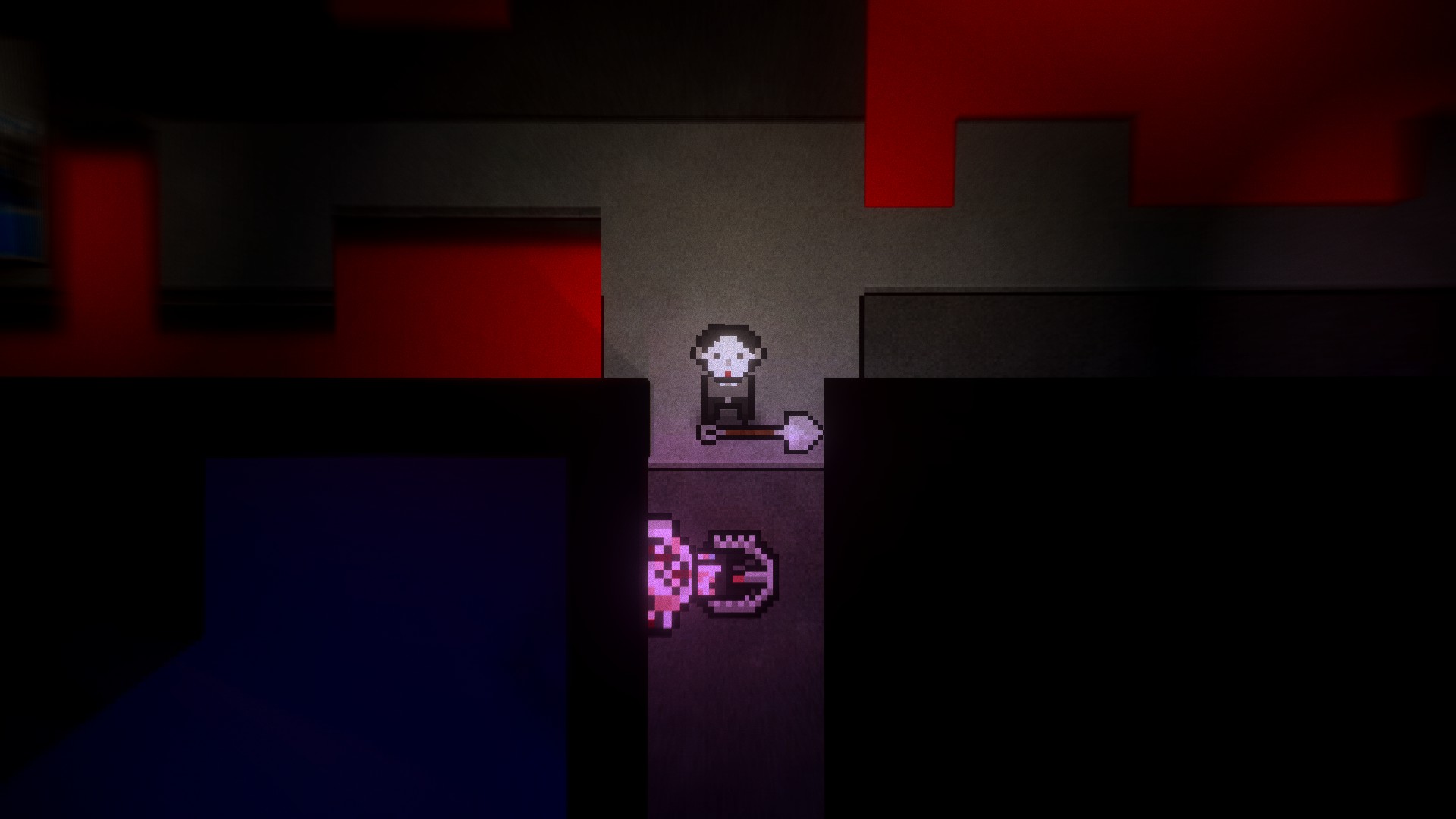 I encountered a glitch where if you put a bear trap in this specific hallway you can essentially infinitely lure enemies in to it to instantly kill them because the bear trap never shuts.

Never in my life has any game made me feel so small and insignificant. In a good way I mean haha! It really bestows on you a sense of awe and wonder that few games reach.

I got to say the whole idea of having the visions you see be randomly chosen so each play-through you might see something a bit different is really awesome.

The blood mechanic does not always work. A lot of the time you can be practically showering in the blood coming down off of enemies or bosses and getting zero health for it. The guardian of hell is really really bad for this and you basically have to be hugging their ankles point blank to get any health even when the blood clearly spraying all over you. This is really bad because the visuals make you misjudge where the health zone you need to be in actually is.

It's like on one hand I thought in the end the best thing to do is free her. Since it seems cruel to try and chain her to this game instead of letting her move on. Like even if he succeeds and nothing goes wrong (And that is a pretty big IF) what kind of existence would that be? He would not even be able to interact with her or touch her anymore directly you know? And she would just see a floating gun or some shit, wouldn't even be able to go anywhere outside that tiny map. And this kind of obsession is not a really good way to deal with grief I think, I think its making him unhinged to say the least. On the other hand the anguish I probably caused him by throwing his work away I took no pleasure in. It needs to be done and he needs to move on but there was a part of me going "well what if he kills himself" or something like that. I basically had to consider it for a bit. It was not an easy decision for me to make.

I wasn't expecting the game to turn into a seriously difficult moral conundrum where I had to sit there and think about what I was going to do because either way somebody is going to get hurt probably, but I appreciate it.

I would be interested in some kind of extended "directors cut" of some kind in the future if possible. The garden management kind of thing you got going with the fish and exploration focused gameplay loop in this game really scratches an itch for me. As does the mysterious and melancholy story and atmosphere.

Pretty clever hiding spot! It never occurred to me to look up there so I never suspected it. Thank you for the great game.

I got the odd one that was near the start but I could not find the other one. Do you have any hints? I would like to 100% this game as its probably my favorite Modus Interactive game.

This is definitely something special, I feel that when you finish the game and get everything patched up you will definitely have something very substantial, it feels like I'm standing on the surface of something much larger and makes me hopeful for the future updates.

Its got the kind of style of something like penumbra which kind of brought me back to my childhood (Penumbra 2006 tech demo was the first real horror game I ever played) but the story seems to be something more personal and emotion based like Silent Hill or something. I like psychological horror being used as a way to explore trauma or personal subjects and etc. I really loved the feel of the environments especially and just the general ambience, very industrial and subterranean feeling. Moist walls and rusted metal, heavy machinery and squealing pipes. Its an aesthetic I really dig for whatever reason and there's just the right touch of unhinged abstractness, hell I bet it will become more unhinged later on but I'm getting good vibes from this is what I mean. I also like the exploration and level design and how you have to explore the areas room by room and collect items and then figure out what does what. The fact that the areas seem to be at least semi-interlinked is good too and helps with the general feel of exploration, it generally feels quite open and I like that.

The only critiques I would have to say is that it seems like a lot of the time when your jumping and crawling on top of things you can get stuck fairly often, so I think player movement might need some tweaking and just general stuff like making sure the player does not get stuck on stuff. For me I was able to just save and quit and then press continue and I would be un-stuck so It didn't ruin it for me but there was 3 or so times I got stuck like when jumping through the shutter on the other side of the iron gate for instance. Other than that I think there should be a bit more options and graphical settings, you know just general technical stuff. I can't comment on the enemies because I kind of blew through the puzzles and stuff but That's just because I have a lot of experience with this type of horror game and the one or two times one appeared I stayed way clear of them and made sure they would not see me.

Fascinating world and atmosphere, I really happen to enjoy this aesthetic that you have created here. Just wish there was a little bit more to the game-play. But hey, your working on a sequel right? So we can only go up from here.

I think you should work on making the zombie animations and behavior more threatening. When I came to the first zombie I was a little bit spooked but almost kind of chuckled seeing his reactions to getting shot seemed so goofy to me.

This is pretty fucking mint dude. I love how exploitative you make the fixed camera angles where many of the decisions of framing and the way the camera follows the player when you do the tracking cam feel as if they are selected specifically to elicit the most anxiety out of a player exploring the environment for the first time. Many times in your demo I was absolutely chilled just because of the dark ends of hallways and other tricks where you think something might be over there in the darkness and/or just out of frame. The sound design combined with the use of ambience (sounds, music, lighting and environments) absolutely nail that nonsensical dream like uncanny feeling that you can only get from certain games like Silent Hill. What story that was in the Demo got me really interested in what the full game might do as well, With bizarre events happening in this little out of the way theater. I also enjoyed playing through the demo a second time on hard and seeing alternate enemy placement and events that don't happen in the normal difficulty as well as a scarcer ammo supply. I had to actually develop a kind of route and juke almost all of the enemies to conserve ammo which is always fun once you learn more about enemy behavior. On my second play through I actually realized that the enemies react to how much sound you make and you can sneak up on them if you walk slowly, having knowledge of that completely changed my play-through and play style. Good stuff.

The only bug I came across is that when you are in the crawling hole animation the enemies are able to attack you during your animation, this resulted in a funny glitch where I had the game over screen displayed for me but then in the next moment I was on the other end of the hole perfectly fine.