how do you use Vertex Snapping, can't see anything in the app or doc site mentioning vertex snapping...?

> I'm trying to solve this though!

you could always run stuff from a "live" USB stick for testing, maybe on a second machine (laptop or such), so you can compile on your main machine, and test on the other...

notice the other report is using a GTX 1050, so probably not specific to intel gpu drivers after all...

I don't know unity (preferring C instead) but is there a way to detect loss of focus?

you could just sleep while waiting for focus to be regained...

just a though, if you export as OBJ, then you can load it in blender and render from any position you like, *with* perspective.

If you've a few to do then I'd save out an empty blender file with a camera set up, so its in the right position ready to import your OBJ...

Thanks for this update, steady useful improvements!

This minor "issue" often won't be seen except with certain blocks, and at certain camera angles (even given different settings)

The lighting seems to behaving like a point source, and if this is the case I've often found in my own projects, just moving the point source around with the camera, still shows off shading, but guarantees no issues...

If its a parallel light source, just set it to the same angle as the camera is pointing.

I'd suggest that by default asset forge should behave as normal, with either a button to move the light and or to toggle this behaviour

oooh there's many more games in town than just KDE and Gnome, both of which suffer from a sense of over importance and bloat !

something like this would be *very* useful, maybe you wouldn't need to select the target surface either.

as you are moving a block about if a modifier key is held down, then a simple mouse ray selection can be used - snap the object to the plane defined by the surface the mouse is point at.

I used this a few years back on a project and it worked really nicely !

well... I gave up on texturing at the expense of a whole load of extra triangles.  It would be really nice if you could have in the materials, an offset, scale and rotation that are added to whatever AF is doing to the UV's,  if they are all set to zero you'd get the normal behaviour. ....

if I save a model and then quit, it says the model had been modified do you want to save it.

this means that it is all to easy to just click through this dialogue almost automatically, its not a warning if it's said even when there is no danger....

if parts of a block are under the ground plane they are unselectable, this means to edit materials on that block you have to move it up, edit it and then move it back down again

a material flag for "don't modify UV's" would be handy, as it is, how would you recommend I make road sections with a dashed line that will rotate with the block...?

haven't used gnome in years, since they decided they knew better how my computer should work... so sorry no idea about gnome...

where the obj is in /Collections/Roads

thats what I did or I'm not understanding what you mean??

I want a texture to be locked and the obj vt coords never changed, is there a way to do this ?

I currently have the texture in Textures/Roads/

I have an OBJ in Collections/Roads/

I started with the texture alongside the obj, and also alter modified the mtl and changed the path to Textures/ (and moved the png)

in both cases at first the texture looks okay, but then when you place down the block it changes 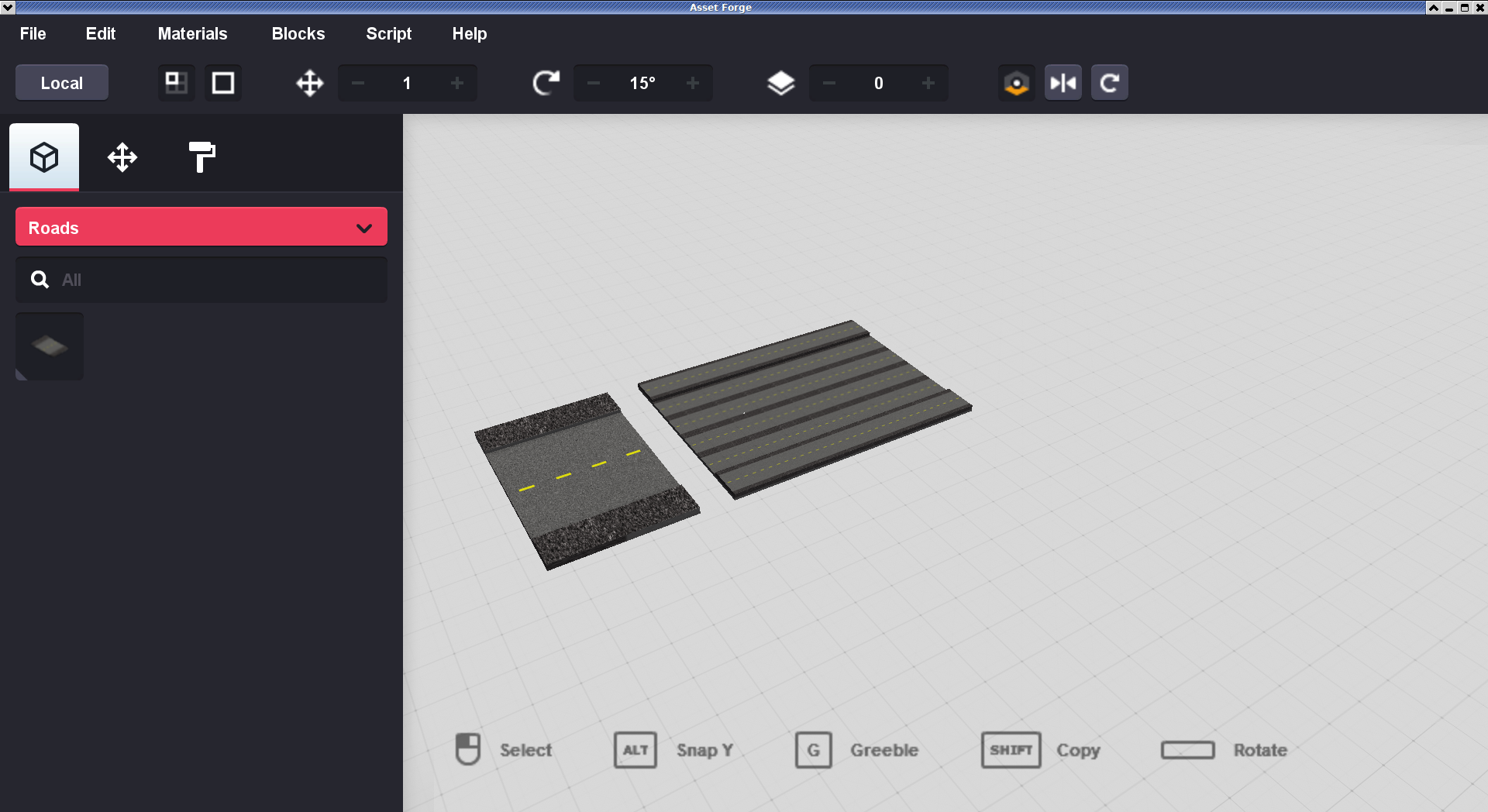 Where should the texture go, especially if I don't want to have any path in the mtl (just the png file name)

I did boot into an old version of ubuntu and that pegs a core at 100% unless the window is maximised, but its a year or more since I booted that horror show...

Best guess I'd say Unity and gfx driver combo...? but even Kerbal Space Project doesn't peg a core, so not sure.

I have to be honest I really struggled finding how to fit blocks together... 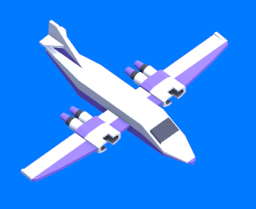 Although in this plane I had to make a custom nose cone, as despite eventually finding a tail section, try as I could rotating and scaling various blocks I couldn't get anything to fit on the front of the cockpit... 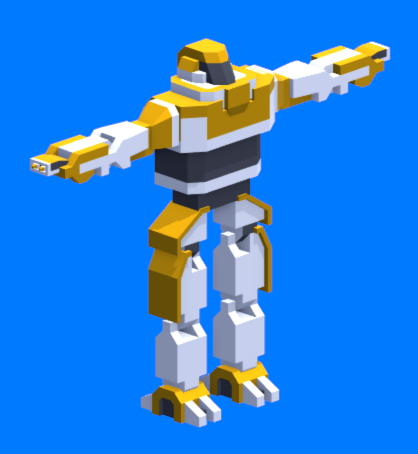 Much happier with this (especially in mixamo!) no custom block this time....


can't work out how to attach a model to a post? but then they are kinda trivial!

regardless of various combinations of settings, as soon as the window looses focus it pegs a core at 100%

okay! i did manage to find one block that fits on the back, but is there anything that will make a nose for the front of *any* of the cockpit ?

I think I'm getting there, but as it is at the moment modelling with blender is easier (in terms of creating not they way you use the app), still it should be worth practising with....

here's an idea of what I was aiming for 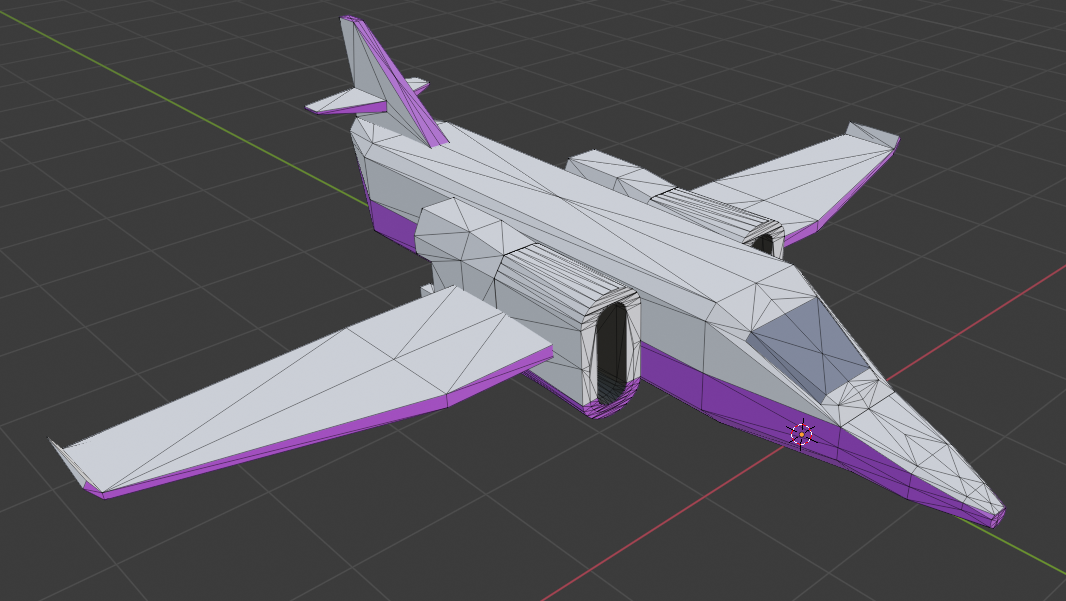 (basically I spent 5-6 mins in blender butchering the horrendous mess from below!)

I called a halt on my first attempt after an hour or more of banging my head against the wall.... 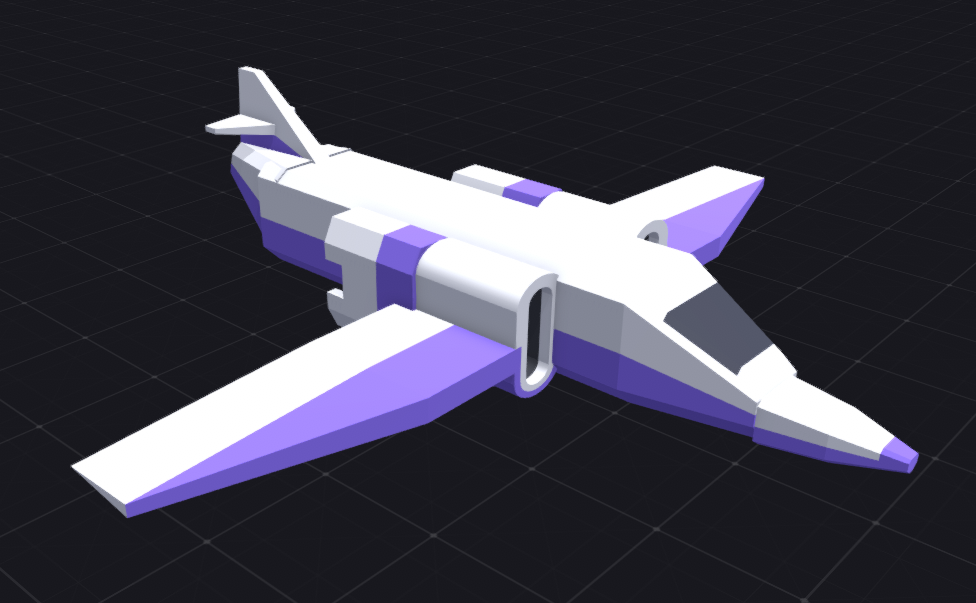 I couldn't get anything tapered to fit on either front or back end (no that nose really is central!!)

the engines despite being copy/pasted ended up slightly different scales

I had thought that I could just use asset forge to very quickly rough something together and then make it look 1/2 presentable with blender - unfortunately exported welded blocks or not, even the lightest editing in blender and something is messing up the shading (its not normals) its an artifact I've seen when the mesh is inconsistent ie with duplicate verts (I welded all close distance verts but that didn't work) - basically it makes a flat shaded face look oddly graduated with the graduation moving very oddly as a light source or the model moves around... (its hard to describe)

anyhow the bottom line fixing with blender isn't an option and I can't seem to fit anything together in the way other people seem to be doing, I'm just not getting something... :(

Which is SO frustrating as I can see the amazing potential of this app...

right click desktop, select create launcher (if your DM doesn't have this option, poke around in setting most modern display managers have this facility)

click to the right of command text field, in the file dialogue navigate to where you extracted asset forge and select Asset Forge.x86_64

click the button that says no icon (labelled icon) and select image files on the dropdown to select a file image instead of a system icon, navigate to Asset Forge_Data/Resources/ and select the asset forge png

you can leave working directory, comment and so forth blank

Whenever asset forge looses focus (window minimised or click another window) the cpu usage shoots up from almost nothing to 100% on one core.

seems there are incorrect line endings (CR/LF) instead of (LF) ...

it works as expected don't know where the : single quotes or \r came from!

game runs fine in fullscreen, however the mouse click doesn't working in any menu. can't actually get anything to happen so presumably clicks inside the game also don't work?

oh sure use it! I've been using the LWJGL3 "driver" in libGDX for a while now, it just works as far as I can tell...

2.0 is quite out of date, and 3.0 is awesome, look at upgrading (will make your life easier in the long run!)

for probably months, I wasn't having any luck running SR on my Linux laptop (intel HD5500 gpu), It could be either the on going development of SR (nice to see an indi game not abandoned!) or possibly the rolling update of Void - maybe both...

But either way I'm glad its working. :-)

Interesting game, noticed you can "fall out" of the console, possibly if you forget to logout and leave a station? only way to get the ship colsole back seems to be to login/out of a station

worth working on to meet the player half way, could be an interesting game...

my intel hd4000 could run minecraft at a decent rate, how do you thing my intel hd5500 will handle this game?

sure but it seems very odd, as the Nvidia machine (my desktop) usually even runs cludges like Unity just fine, at least I can still use it on my laptop...