Yeah, go ahead! Be sure to link it in this comments section when you’re done too!

Thank you! Have you installed the font included in the .zip file? That might be the reason the text is running off the screen.

Oh, I must’ve made a mistake! It was supposed to say it was only playable on Windows. I’ll go fix that. You can get a .exe converter for mac online if you still want to play the game! I’m sure there are some out there that will work. Sorry about that.

Can you be more specific? Are you just trying to figure out how to download the game?

I loved your video! You have a great sense of humor. I'm really happy that you could relate to it as well, I was hoping it could be something that reminded people of their overly pretentious teenage selves. Looking forward to seeing part 2!

Oh, I apologize! I misread your comment, I thought that you wanted ME to translate it. That would be amazing if you translated 1998.

HERE'S A WALKTHROUGH TO FIND ALL 3 ENDINGS!

There's one more scrapbook page you need to get! Here's a hint... they tend to appear in locations where important cutscenes take place.

Sadly, I don't know that much Spanish at all. However, if someone else is willing to translate it, that would be really awesome.

I just watched your video! Thank you so much, it was hilarious and had great insights. If you want to replay and get the secret ending, I would suggest installing the font included in the .zip file so the font doesn't go off the screen. I’m so excited that you took the time to do a playthrough. Thanks so much!!

Thank you so much! Here’s a hint on that ending- try clicking on things in the game. There’s some hidden stuff! Be sure to choose the dialogue options that would get you the second ending, too. 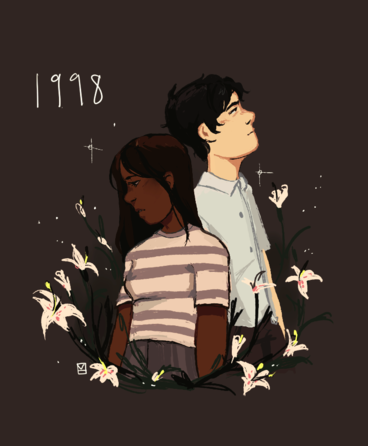 Proud to announce that after a long development period, 1998 is now available to download on itch.io!

As Audrey enters her year of high school, she swirls into a crisis as she realizes that her bitterness and contempt has prevented her from having an enjoyable childhood, and there’s not much of it left to fix that. Her cynical outlook starts to change, however, when she meets Jun, a boy who just moved into her town. 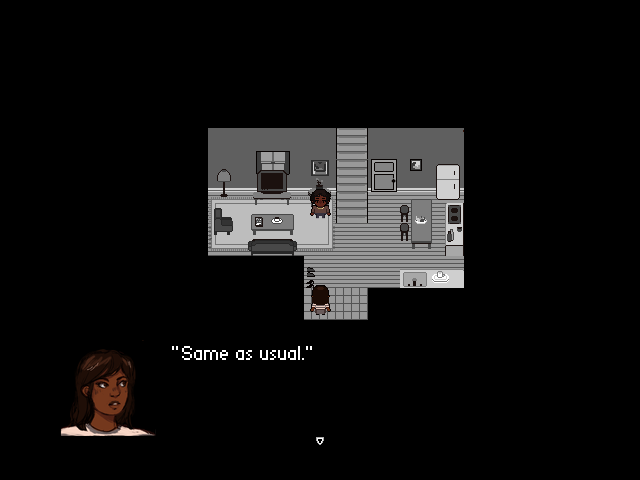 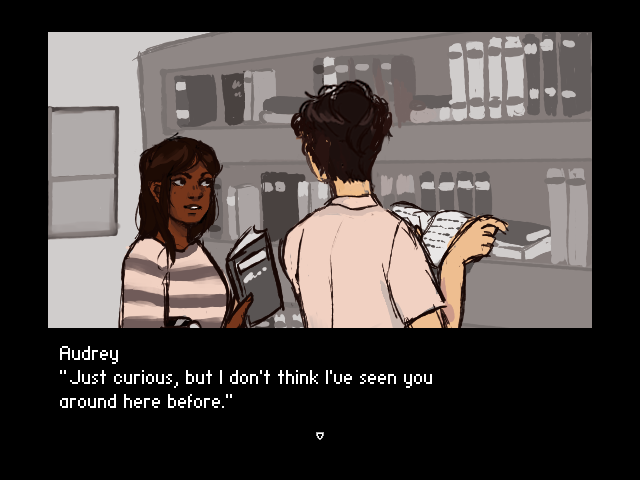 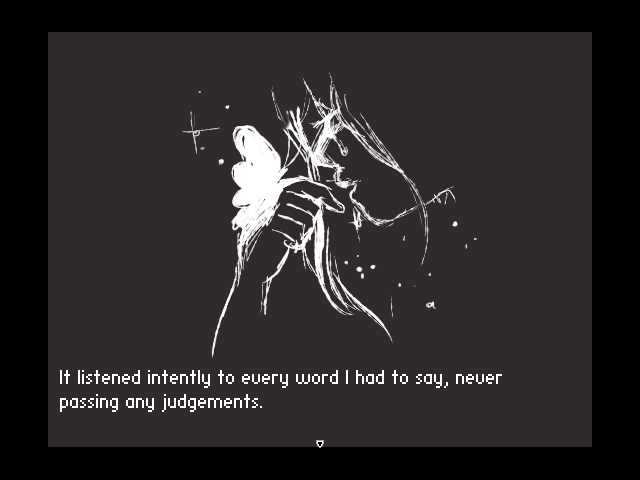 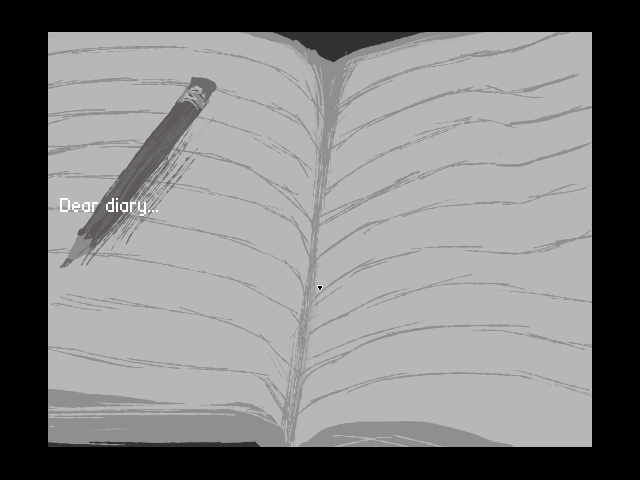 You can find the game page here!

Yes! All maps except two colored ones will be monochrome. You're absolutely right about it fitting her emotions- that's why I decided to color it like that in the first place.

Here's some more screenshots of the game:

Audrey, now entering her last year of high school, swirls into a crisis as she realizes that her bitterness and contempt has prevented her from having an enjoyable childhood, and there's not much of it left to fix that. Her cynical outlook starts to change, however, when she meets Jun, a boy from Japan who just moved into her town.

Audrey: A girl filled with pent-up hatred for her peers and her surroundings.
Jun: A calm and optimistic boy who often puts others before himself, even if it sacrifices his own well-being.

Gameplay is relatively quick- The goal is for it to be around 1 and a half hours, but it could potentially be longer.

Here's some links to other platforms this game is currently on!

The release date is hard to determine, but I imagine it will be out in a few months. Until then, this blog should be enough to tide everyone over.

I forgot to back up my game in Google Drive, and somehow the file got corrupted. All that remains is one song.

I will not be submitting anything to the jam this summer. I am deeply upset by this.

I will be redoing/finishing the game at a later date. I put so much hard work into everything that it would be a shame if I didn't follow through. In time, I will post the finished game on my profile, tumblr, and possibly on GameJolt. I'm sorry I let you down, guys. But I can safely say I did get all the experience I wanted and now I actually have a really good handle on the software and I know the ins and outs. Thank you so much for keeping up with me! And stay tuned for the games later release.

Aaaaah!! Theres only three days left of the game jam!!

Needless to say, I pretty much got everything down. I'm out training for xc right now so I haven had much time at all. I'm gettin' my head in the game.

I have finished all the outside tiles, Whitney's face, the dwarf's sprite, and all the music.

As usual, here are the gifs of my progress:

And here's the dwarf.

If you want to check out the music, here's the links:

One is for the title, the other will probably be fore the credits. I recorded my guitar on Garageband at 1 am so bear with me.

Today I think it's fair to say I've finished a lot.

I completed the interior of the cabin, made a faceset of Rose, sprited Whitney, and customized the menu, windows and font. I created a night version of the cabin as well. I know, I know, I could've tinted the screen but I thought making a new tileset and new maps would look better.

I did place a lot of little events and text around the maps, and to my surprise eventing is much easier than I thought! It's the tilesets that give ya grief.

Wish me luck! Working on this game is time consuming, but I like it.
Reply
My First Game Jam: Summer Edition community · Posted in [Devlog] Red Snow
averageavacado5 years ago (1 edit)

I did QUITE a lot today. I fixed Rose's sprite and made about 90% of the tiles for the interior of the sisters' cabin.

Things are starting to come together a little bit! Tomorrow I'll finish more tiles and sprites. Then, after that, I'll work on the windows, menu, and text.

I didn't spend nearly as much time making the tiles as I did fixing them and doing touchups to make sure everything fit together. This stuff aint easy.

Here's some test gifs showing what I finished today.

Can't wait to get working on the forest!

I haven't made a ton of progress yet, but I have started to make the sprites and tilesets. I'll finish them tomorrow morning.

I made a sprite of Rose, as seen here

But turns out it was too small! I'll have to outline a base next time.

I know I'm capable of creating better art and more detailed tilesets, but I really want to be able to finish this game. So, I'm keeping it minimalistic.

I'm doing the sprites in sai and the tiles in paint. I'm gonna touch them up a bit tonight.

Wow, this really is tedious.

Red Snow is a modern take on a Grimm fairytale called Snow White and Rose Red. It follows two sisters, Rose and Whitney, living in a cabin deep in the woods of the northeastern United States. One day, they find a sinister looking man caught in a bear trap outside their house.

Like most classic RPG Horror games such as The Witches House, Ib, and Mad Father, it is a dialogue-based game that involves puzzles and chase sequences. It's relatively short, considering the amount of time given and the fact I am doing everything by myself.

All art, tiles, and music will be my own.

I'll update this log soon! Currently I am writing out a script for the entire game.