The friendly castle poltergeist collects food for the fat king.
Submitted by willjo — 32 seconds before the deadline
Add to collection 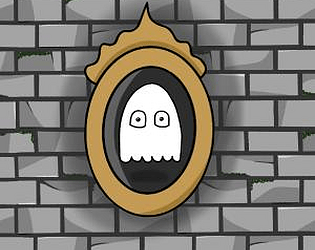 How does your game utilize the limitation and theme?
You collect food and go back to the start if you fail to please the king

This game is a really fun and solid platformer. At first, I thought it was weird that a ghost had to collect food, but then I realized it was for the king. The level design has a good amount of challenge without being unfair. Though, I would like to see more obstacles added instead of mostly spikes. As i was playing I was unsure how the theme came into play, but when I fell through the trap door, I realized and everything came full circle. The balloons and wings were also a nice touch to change up gameplay. Good job! I really enjoyed playing your game!

Fun game! I enjoyed it! But I thought the there and back usage was a little weak in the game and didn't do enough to the core gameplay. But still a very fun game, and I managed to beat it! Would you mind trying my game as well?

its a fun game, I like the art and music, but I would have liked a few more powerups

Maybe I got 11% or so of the food. Not really enough to see the theme. (Reads explanation) oh, losing sends you back, so that's how it was there and back. Kinda guessing you came up with that to save time, but a creative way to do that, so that's great! And the music is good (sounds fun, and having a wind instrument fits the character being a ghost somehow), I would have liked a sound effect when the ghost gets sent back to the beginning (but at least there is one for picking up food, and I wanted to pick them up on beat because of that). I could also have wanted to, when I get sent back to the beginning, have a moment to see what my score was.

Could have wanted to be told there was double-jumping, but I guess the level design made me realize that soon enough. (That's the kind of thing I would ideally want to let players try and figure out by themselves, but have a hint on a timer, so if they get stuck the game could tell them that... but as someone who wanted to have a spoken credits screen went with a text-only one because it was only one hour before the deadline, I can understand if that sort of stuff is missing.

I played it for a while before realizing almost everything in it is black-and-white. Well, it doesn't really need more colours, and those colours are used well. I like the animation of the ghost.

Submitted
Back for the discs
LikeReply
onlinemusiccampsSubmitted2 years ago(+1)

This game is pretty cute and fun.  I like how it kept on adding powerups and mechanics the more you played.  I think pacing wise it would have been good to introduce them a little sooner, but this game overall is great!  Awesome job, I even loved the music!

Cute game. The controls felt nice and I liked the fact you added new mechanics like balloons and angel wings to mix things up. I felt the level was too long though.. The percent bar was moving so slowly that I felt I'd be wondering around for ever looking for food. I almost quit and then I found the angel wings which made me zip about much faster which was great. Then I lost the wings on some spikes and that was enough to make me give up as my percent bar was only on 21% :( Also, why do spikes kill a ghost??

The characters we cute but the level could have more variety like different terrain in certains areas, or make certain areas darker, you could even make an area of the map completely black and give your ghost a glow feature that lights up the area around them... just a thought.

PS. playing this made me hungry :)

I love the movement its floaty and feels like a ghost. The game was nice and relaxing. Also the ghost is very cute. Really great job!

That was a fun game, I got stuck at some point but it was relaxing to walk around to collect elements, I particulary liked the wings and player design.

I guess it would beneficiate from more elements but I enjoyed the slow pace, felt relaxing!