A calm game about delivering mail and helping people.
Submitted by Kaisei Dev — 59 minutes, 40 seconds before the deadline
Add to collection 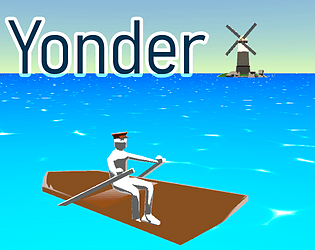 How does your game utilize the limitation and theme?
You play as a mail man, going back and forth between islands delivering packages, and helping one of the islanders to collect flowers.

Good game, I found a bug where when  I sat on the bench it wouldn't let me leave the bench, other than it good game.

Thanks for playing and yea, somebody else noticed that bug It'll be the first thing I fix when I can :D

It is a calm but cool game. The only thing is that it the white highlights during the day and black shadows during night seem a little like a visual bug because they have too many contrast.  The camera also goes inside objects. It needs some polishing, but, in general it is a very good game.

I completely agree that it needs polish.

Nice to see something that isn't a platformer or grab-these-things-before-they-move-out-of-the-screen game. And while I'd like to be able to control the camera with the keyboard (especially when I'm rowing), I really like the rowing controls (they might have got my fingers a bit tired though (and now I realize I could have pressed A and D at the same time rather than tap-one-tap-the-other. I'll probably have to try this game on Windows (I'm on Linux right now) before I can rate the audio, but I think the visuals work well when things aren't going white (the cartoonish specular highlights go all over the place) or black (the night makes some things a bit too dark, I think). I also feel like the camera shouldn't be getting inside things, but as long as it doesn't make the game hard to play, I guess it doesn't matter too much.

Submitted
Back for the discs
LikeReply
Kaisei DevDeveloper307 days ago

and I should definitely put more effort into the on-boarding process next time (btw you can hold the buttons as well, didn't mean to give your fingers a work out :D ). I went a bit too ambitious with this one and ended up not being able to refine the visuals and game feel the way I wanted, but that's what it's all about- learning!

I tried the game on Windows to hear the sound. There's sound effects for walking, rowing, picking up stuff, putting down stuff, there's also one for talking to people or picking up flowers. What could be improved about them? I guess I could have wanted the different islands to have different sounds unique to them, but maybe that could have been different music tracks rather than sound effects.

The music, I felt like it fit the game. Not too fast or too slow, and sorta casual-sounding. But just like the graphics with too-light and too-dark spots, I felt like the music could have used a little bit of polish... and then the day turned into night and the music happened to stop at that exact time. And then it started again, but the silence in there was nice (not sure if it was intentional, but it made the music seem better, not worse). It would have been fun if the night actually had different music, maybe some slower piano music: If all the music goes at the same pace, it gets boring after a couple of minutes, and that's less time than it takes me to beat the game.

So I think the music could have been more interesting, but I really like the sound effects (and the possibly unintentional silence that came right when the day was nightening). Good job!

Also, one bug I noticed on Windows: if I walk up to the boat with a package on it and press E, it gives me two options, but if I decide I want to do something else before I do any of them, then I should be able to get rid of the menu. Instead, walking away without selecting an option left the menu on screen, with both options unselectable, and I'm not sure I could use the boat at all after that.

Thanks for such in-depth feedback!

I definitely intended to do much more with the soundtrack. Having different music on each island was definitely the plan, but I simply ran out of time, I didn't even allow myself enough time to finish the one you hear in-game. If only I had managed my time better or been less ambitious :D

This is a fun and refreshingly different game. Rowing the boat feels good. And I was surprised at how much you put into the game in just 7 days. One point of criticism I have is that the theme implementation feels a bit tacked on. Anyway great job!

Yea, I totally agree the theme should have been more central to the game.

fun and simple. using the boat was a lot of fun, and i really liked how each of the flowers came with an image so that you had an idea of what to look for. day / night cycle was great too, it added a lot of character

I had a fun time playing your game!  The controls felt really good, and it has a nice premise.  The only thing that could be better is the graphics. I also did not expect to see a day/night cycle.

I had so much fun rowing around! A marker for which island you need to go to would be a nice addition, i realised after a bit that the building on the island was an indicator but it wasn't initially obvious to me. Day & night was a nice touch, it did get a little bit too dark at night time in some areas. Overall was heaps of fun.

I appreciate the feedback, I should have totally added markers!

Nice job on this! I really liked the scenery and certain details like the day/night cycle. I think it helped make the game world more immersive. One possible addition I would suggest  would be settings for mouse sensitivity.

You're absolutely right about the mouse sensitivity, sometimes I forget how low my own mouse dpi is :D.

I'll definitely keep that in mind from now on.

The controls took a minute to get use to but when I did it's just fine.

The only problem for me was the night time mode it too dark and too fast..

I 100% agree about the day night thing. Thanks for the feedback!

Its unfortunate you ran out of time, but hey that's part of the journey. For what you did get done i really enjoyed it! Great job!