2D Platformer where Shanghai must deliver presents to Marisa and Alice while avoiding enemies!
Submitted by Bakaretsu, Iced_Lemon (@Iced_Lemon_Draw), InSuccession — 58 minutes, 50 seconds before the deadline
Add to collection 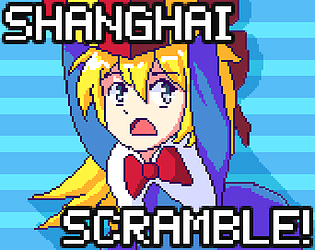 I like how it can be summed up to "two very close girls send gifts back and forth". Everything here is well done and thought-out. Oh and snazzy soundtrack yo. Nothing more to say.

I've featured this game in my Game Jam video so you can watch Shanghai go back and forth in the middle of the rain:

Everyone's favorite doll gets her own platform adventure.  Well-done.

Quite adorable, little Shanghai giving presents, also, a very neat Valentines Day themed game, I think you were thinking that was going to be the theme on this jam (perhaps) (?

Quite simple, but it gets harder, very nice touch to make shanghai fall instead of taking damage, it really feels you need to dodge quite wel to get better.

Fun game. It works really well as a "coffee break game", and is satisfying to play. I personally thought the level was pretty well tuned to the player movement, with platforms being at the proper height and the dash covering a meaningful distance. I like how enemies not respawning both work as a punishment and "reward", since it makes the next run easier while reducing its score potential.
The only improvement I can suggest is to add a display for the players hi score at the title screen, but that's clearly a very minor point.

Not really related to my impression and ratings for the game, but I once managed to accidentally clip into the ground by dashing into (and getting damaged by) an enemy. See the attached picture. 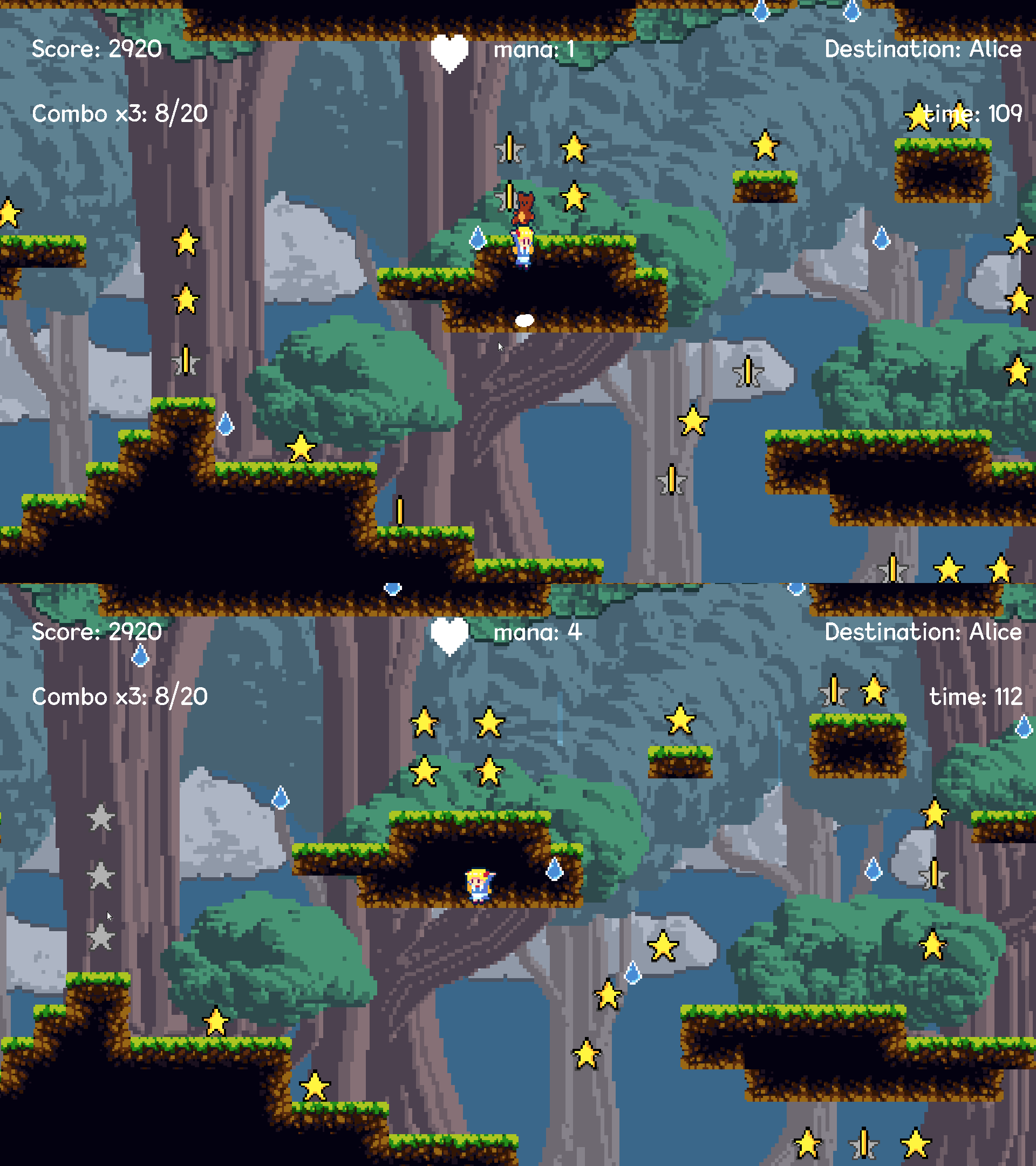 Thanks for playing! Yeah, the clipping into terrain is a bug we're aware of, and we're hoping to get that fixed in a post-jam build!

This is the kind of game that really shows that less is more. A very simple gameplay idea, running between two houses on a time limit, is enhanced by bullet hell elements and a pretty creative use of the jam's "combo" theme. Also, I must say the game is overall pretty polished for a jam game. The music is good and mixed well, the sound effects are also on point, and the graphics are also great.

Very adorable. Wish it didn't take me three entire minutes to figure out what an MB is (I thought it was like a shoulder button on a gamepad listen I never claimed to be smart)

I very quickly became hooked on the dashing, especially in midair. Ran into so many raindrops

Submitted
Yet Another Imperishable Night
LikeReply
pontifusSubmitted248 days ago(+1)

Cute premise with fun execution. Really enjoyed this one. I was maybe a little too enthusiastic about the dashing ... but when dashing feels good, sometimes you just gotta die. No regrets.

NICE!! When I think of an ideal jam game, I think of something like this, fun, quick, easy to understand, and that gamefeel ties it all together, I don't know what to say, this may be my favorite entry so far :D. Also, I would like to thank the composer, the music is top-notch.

Don't speedrun it with dashes you say? How else gifts will be delivered in time *dashes away*

Looks quite good, but Time is difficult to notice, I thought Mana is the only restriction untill got Game over.

Yeah the UI was not great, it was a last minute hack job. There are a lot of information that is not conveyed properly.  Mana is basically a time limit on your life, you will die if that runs out. the way to refresh it is by gaining combos, it is there as a way to make you speed up and think fast. I did say not to spam the dash mostly because your dash has a cool down and you don't want to be locked in a troubled location, especially on later difficulties where there are a lot of bullets.

Anyway, thanks for playing the game. I hope you appreciate the effort I did to make the game feel satisfying. :)

One of the best games here! Great arcadey charm: looks good, plays smooth, sounds fine, and feels  polished. The only thing that looks remotely off is the UI, but that's just in comparison to everything else.

Thanks! Yeah, we were totally strapped for time, so some UI designs were scrapped in favour of working on the controls and polish. We put a ton of time into those, so I'm glad to hear that the "game feel" is on point!

It is very fun and addictive. very good job guys

Thanks for liking the game. I spent quite a while to make the player's action feel good so it would feel addictive. I am glad you had fun.  (Also love your art)

I really enjoy this game. It’s a cute concept with simple and intuitive controls. My highscore is a bit below 8000 because I was a bit too greedy when trying to deliver the final present to Marisa and I ran out of mana.

I only have a single suggestion, and that’s to make pounding from a dash easier to do. It feels kind of inconsistent to do for me since there’s a short period of time after dashing where the pound just doesn’t register.

The urge to dash always bites me in the ass. But I like the smooth and responsive controls. I think it would be even better if the the level itself were more tailored to user's movement, sort of like a Sonic level. One thing that trips me up is that dashing always puts me in a blind spot, in a screen that's full of bullets and rain drops no less. (Maybe more camera panning towards your facing direction, idk.) Overall, this is impressive visually and audio-wise. Thumbs-up all around.

Initially, we were planning on stages with randomized level designs, but that was replaced with one static stage in the last 40 ish hours, so yeah, the stage could use some polish to allow for the player to take full advantage of dashing and going fast. Thanks for the feedback Kuranto!

I've spent decent about of time to make sure the player's moves feel satisfying, and I am glad you liked it. Although spamming dash in this game is a death sentence, which I would say it is what  I was hoping for since I don't want to encourage players just keep dashing to the other side easily without collection stars.

Yeah, like Bakaretsu said we initially going to have randomly generated levels but ended up scaping that due to time and complexity. I tried to design the level in a way that you can warp around in both horizontally and vertically, most of them is done by placing starts to telegraph the paths you can take. But it is not perfect and I think it could be done better, more straight horizontal spaces would be nice as it fits the dash. also some enemy spawn locations are just downright awful.

Also I too hate it when the camera does not follow you fast enough. I tried o do a forward panning but it did not work. I will have to see if I can fix that.

Thanks for playing and I really appreciate that you enjoyed it.

I liked this one a lot is a simple idea but is a really funny one, also nice way on implementing the combo mechanic, nice job guys.

Also glad you didn't forgot about the most important thing about a game, being funny

haha, funny dolls and fairies go squish. I am glad you enjoyed the game and the small sense of charm it has. I was planning to add a bit more but did not have the time.

Haha, nice to see you used the Amazon Prime delivery worker metaphor. I am glad you enjoyed the game. But 50 point? HOW?!!! I don't think that is possible.  I would appreciated if you can explain that, but up to you. Thanks for playing.

if i tell you theyll come for me

If you die when there’s the “Hurry Up” text, the text will spin with Shanghai’s death animation. I’m not sure if this is a bug or not.

I am actually aware of that issue. it's just that I don't have the time to fix it. I have to fix more important stuff than this back then. :(

Yeah, it is pretty minor. That, and it’s also really really funny.