Touhou's Renko and Maribel board a mysterious train to Gensokyo, but will everyone make it out alive?
Submitted by Nitori, LadyEbony — 17 minutes, 9 seconds before the deadline
Add to collection 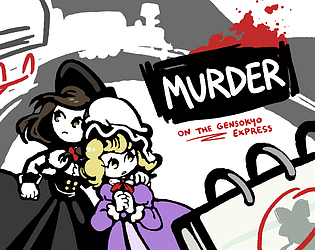 This was a delightfully civilized romp!! The train was brilliant to explore and the dialogue was at once gripping and hilarious, fan-friendly yet accessible. You could probably inspire a lot of people to play Touhou based solely upon the idiosyncratic juxtaposition of these extremely bizarre characters. I was too late to vote for this, but I would have given it five stars for Concept simply for how it could not have happened that way outside of the Touhou Universe. As for its relevance to pride and identity, I must say that I didn't buy it as much. Sprinkling homoerotic overtones does not really get at the heart of the issue of self-determination, but then again it was only a game, after all. I hope that Reimu did not hurt Marisa's pride too much. XDXDXD. R>G.

That was a lovely time. It had charming character interactions and organic progression to make that shine. The models and environment look lovely, making it a shame the walk cycle couldn't make it in. I especially loved the small stylistic details like the walls collapsing when you walk into a car and the silhouette when your character is behind something. It was also hilarious to see a murder mystery where everyone was fighting to claim to be the one who killed poor Reimu. One nitpick is despite the music fitting really well it looped quite awkwardly with a lot of silence and a weird cutoff when resuming, kind of hurting the tone every now and again. Anyway, great job through and through!

This post brought to you by the synchronized forehead-wiping gang.

Great game, so funny too! And surprisingly we had no problem at all with the online coop, so that was such an amazing work there :D The music is nice, the visuals are awesome too :o

Well that was entertaining. I think the number one strength here is the visuals. Followed by writing. The music is top-notch as well. That's a heck of a story to think up, and I'm a sucker for over-the-top murder mysteries Phoenix Wright or Danganronpa style. I'd actually wanna see more of these.

A very good game overall. The writing is funny and well-thougt. The Visuals are very good, especially the 2D portaits. Although no walk animation is a bit off putting at first.

The use of the "Identity" theme was very creative as well!

Only small problem I encountered: I was able to "solve" the case without once going to see Remilia. Was a bit weird to be honest.

Indeed, very late in development we had concerns about people not being able to get to the ending (which required solving every single characters problem), so we made it much easier to accomplish. The lack of walk animations was also a bug we put off slightly too long, as walk animations are in fact in the game, and had we another hour they'd be turning on properly when you move.

Regardless, we hope you had a good time and enjoyed our game!

I sure did, that was a very good game. I mean I actually went back to it when I realized I missed stuff after all ^^

I am all too familiar with the "stuff that could be put in the game with just one more hour", it's something we have to live with in a Jam. But what's really important is that what IS in the game is cool :)

Alas, the 'no walk animation' bug got me and Renko scooted everywhere. Controls and graphics are damn impressive for a three-day job (and it supports networked multiplayer?!). Maribel never blocked me in a corridor but I can see how that could end up happening. Nine character models, plus 2D portraits, plus the train and compartments, plus all the CGs...

...Bravo for time management, I have to say.

Only complaint on the visuals was Remilia's head not also being on fire.

Writing stole the show, of course. A murder mystery where half the cast admit to being responsible... every character feels distinct, from Niwatari to frickin' Sakuya just standing there. (Does Maribel get an extra set of dialogue from interacting with everyone? I only played SP)

Use of Theme is solid for 'Identity' given... well, the murder mystery and its resolution, and the LGBT side is represented for the obvious reasons.