Alice is formidable. Can Marisa win her over?
Submitted by kurantoB (@kurantoB) — 12 minutes, 34 seconds before the deadline
Add to collection 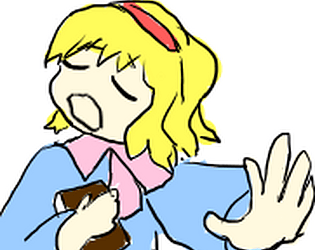 I liked the game overall.  I think because it took me awhile to figure out, I got weirdly invested and was quite happy when I finally figured out the puzzle, and spent the time to get both endings.  I like the facial expressions for Alice.  I didn't mind the difficulty of figuring it out too much since it's a short game

This put a smile on my face. And whoo! You were even thorough enough to showcase both endings. This game was really fun to make, and I'm glad you enjoyed it! Watching someone else play made me realize just how very frustrating it is to play through, which I can't speak to since I know exactly what route to take......... Duh. Subbed.

I'm glad you enjoyed the video!  I think of myself as more of an action game guy who sucks at puzzles, so this one took me by surprise by how much I wanted to full-clear it.  Thanks for making the game

This definitely had an interesting idea going for it but a few things in the execution made it convoluted and punishing. I'll give a pass to it being arbitrary what options to pick, but the gameplay to do so is really tedious. The random topic generator is a neat concept but generally lead to a lot of waiting and nothing else, and timing that to when you were supposed to "end" the conversation became a bit too stressful and especially too cryptic to ever find out myself.

It was cute tho. Aggressive flirting games are always fun.

Some thoughts in retrospect.

Here’s the game mechanic. There are 2 conversation topics that will give you a scenario for confessing but for that to happen, for each of them, two other specific topics need to have been already discussed (doesn’t matter which order), which the “confession-friendly” topic builds upon. If you go for the confesssion topic first, before finishing the other two, it won’t build upon anything and you can’t confess properly. But you can go back to the same topic after you completed the previous two.

One glaring weakness is that it’s hard to tell when it’s okay to initiate a change in topic. I blame the limits on my writing skills. In general, each topic has a point to be made, after which the discussion sort of winds down. It’s safe to change topics then.

If I were to do this over, I would have some sort of indicator to let you know how many “precursor” topics you’ve already covered, so you’ll know when to look out for an opening.

Gameplay is pretty cryptic, not sure if anything I was doing was correct, though changing the subject at inopportune times is punishing, just like irl. The one game I can't use cheat engine to overcome

Talking to girls is really hard!