Still working on it, sorry about that! I post occasional progress updates on my Twitter but when the game is out, you can find it for free on this page!

Hey thanks for playing! We’re working on a post-jam update that adds a new character, additional combat mechanics and more polish overall to be released in the next week or so, so do check back in a bit. I do post occasional progress updates on my Twitter if you want to see things as they’re developing!

Hey thanks for playing! Sorry for your initial subpar experience, we hope to release a post-jam version of the game in about a week or so. It’ll have substantially optimized performance, squashed bugs, additional content and redesigned bosses!

getting hit is cringe

I will carry these words through the rest of my life

As expected, a formidable work that tops it’s predecessor! One whose dealt such a blow to my self-esteem that I could not hope to recover for at least another human lifetime! I had to muster up a lot of strength to play this game, but I don’t think I can muster the strength to push that big confess button

The art is really cool and the theming is pretty fun!

After lowering my refresh rate (and actually adjusting the same setting in-game), I finally got to appreciate the game at a more comfortable speed. That didn’t stop me from dying 10 times in 20 seconds though.

This really made me FEEL like I lived in a society.

tfw u leave the refresh rate at 144hz

I don’t think I’ve ever been so attacked by a video game in my life. Just the feeling of walking in on normal mode only to die 10 times in 10 seconds, getting a brief but, much needed period of respite through the dialogue, and then proceeding to get pummeled non-stop again. I’ll take-the-difficulty-levels-scaling-bullet-speed-rather-than-actual-difficulty as a product of jam time constraints and just say that your patterns and effects were very pretty, although I was too busy panicking to appreciate them.

I’d say that this is a really awesome demo of your bullet hell engine though! The disappointment I felt when I failed to slow the game down using cheat engine eventually turned into amusement when I realised that the frame counter rose instead. You really thought of everything huh?

Hey, thanks for playing Joshlynn!

To address your feedback, the flying/walking movement transition is intentional, but we’ll look at it again to see whether it helps/hinders the overall experience. Also, which particle effects specifically did you think were hard to look at?

I’ve never actually played Overcooked before, but I think I will now!

The level design and varied layouts is clever and well-thought out and I appreciate how the game encourages you to learn despite the mistakes.

Gremlin-Marisa’s introduction was brief, but I’ll remember her forever

Many thanks for this fix, good to see you back!

Hi Geovardo, Rocket Jumping VR is my own VR version of the rocket jumping that you can do in the game Team Fortress 2. It's free to play and doesn't require a VR headset!

At last, someone else whose played Learn to Fly!

Also, the horse *does in fact* speed up, at least in terms of the animation speed + background scroll speed. Will make the change more noticeable!

I usually hate the idea of having merely the illusion of choice in games, but it was very fitting to have our beloved Reimu strike down the notion of acting virtuously at every turn, especially when I thought to myself to try leaving the good person act in my second playthrough

Love it all, though I do wonder if the dragon god was purposefully left unfinished?

Meiling, Miko and Ran are really high up there on my list of favourite 2hus (in that order) and it was very amusing to see them combined in funky ways!

I feel that the boss fights were quite punishing though, especially since you can't aim the projectiles you succ for fight 1, and I had no idea what to do for fight 2. I think boss 3 was broke in browser build so I can't do it justice.

I'm a long time DDR player (foot level 12) and this threw me for a loop instantly with it's left/right brain gameplay, like learning to ride a bike backwards or trying to type on a different keyboard layout. Couldn't even get past stage 3 once the music interchanging all the different alternating notes in different colours.

Although stylistically cute, I think it would serve the player better to have the arrows/keys written on the mochi rather than having the faces because it forces my brain to translate the mochi's colour into the corresponding orientation and then having to translate that to the finger I must use. I think because of how brains work I keep flipping the arrow on one side to the opposite side of my other hand.

Otherwise its a really well put together game! But I fear my mind will tear in two if I keep going at it :)

I gotta say the RNG boulder dropping hurt me just a bit, especially boulder hell in that one triple gap segment in stage 3. Probably could have done without the camera shake on dash for additional clarity.

Otherwise a well-done Celeste-inspired game!  Neat levels and the mechanics were spot on (coyote-jump mechanic was nice to see).

Managed to climb up the steep slope on the first island by jumping at it, then spamming the needle attack while I'm in the air :^)

I see that you handle character steering strictly using the directional keys, I personally like a combination of directional keys + camera look direction when moving so I can move around in the air by pointing the camera rather than pushing keys.

On the mini island that you get to first using the parachute, I didn't like how the coin placement forced you to drop down and gave no reasonable escape without falling into the water and resetting.

The rocks acting as an indicator of where to go in the dark tunnels is pretty clever, though the inaccurate lighting in those scenarios made this instance of the technique less immersive (use glow stones instead perhaps).

Overall loved, the whole thing, especially the level design and art, impressive how much could be accomplished in 72 hours!

You're 9 months too early to be spooking me this badly

Not so bad as to prevent me from playing though, but I had a feeling those red eyes were no good

Have to agree with everyone else on the move speed, slow helps pacing but that was slow to the point where exploration felt tedious.

Really liked how the story slowly unfolded though, had me on edge the whole way

Otherwise it's pretty solid, all around, appreciated the audio feedback, even if it's minimal, bullet patterns and gameplay were pretty inventive, hats off to that!

Otherwise it's pretty solid, all around, appreciated the audio feedback, even if it's minimal, bullet patterns and gameplay were pretty inventive, hats off to that!

Was quite surprised to see an action RPG being made in RPG Maker, not every day that you see that sort of thing attempted and for what it is, its really good. The feedback was all there and everything fit together.

I am concerned with the game feel though, just because the stamina recharged too slowly, I assume to deter people from mashing A/Z at everything they see, perhaps it would be better increase the recharge rate but increase the time between attacking and recharging?

Collision detection is also a bit iffy when I would think I'm hitting an enemy and I miss instead. There are also times when I think I can land a hit but I can't, half the time I was still recovering a hit I've sustained myself but there are times when I have stamina but couldn't attack for some reason.

I can tell there were some interesting ideas that were planned but weren't fully integrated in time. Would've liked to see more low health enemies in the same area to appropriately see the on-kill mechanic shine.

Holy shit you can walk on slopes!

Gameplay is simple but very interesting, I wonder how it would play if you could choose where to rotate rather than have it rotate automatically

Attached is a very interesting thing I noticed 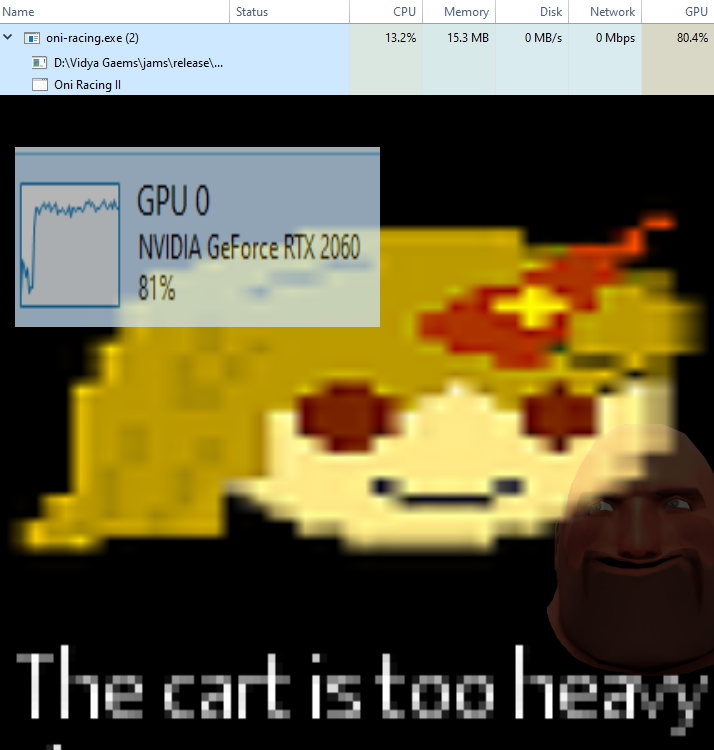 Well that was funky, tossing Chen all over the place... like a Boomer-ran~

I notice that your player-to-wall collision was a bit whack, in the future I'd suggest either using the MovePosition method or manipulating the velocity variable directly, both found in the Rigidbody2D component. Took me about 3 years of Unity dev to figure that out

Tower defenses are always nice to play every once in awhile!

My only issue is with the clicking, because it feels like I have to double click on everything to get things to work, even when trying to advance the dialogue.

That final level is real tough though, maybe it's because I wasn't using Marisa and Youmu as much as I should have? Either that or I've been spoiled by Bloons TD.

Didn't take long for the puns to start rolling in

Well I can't resist a polished match-3 game, 66400 is the best I can score in marathon it seems.

Good audio production and visuals, nothing makes me more terrified than when the soundtrack changes to the more hectic version!

God I'm bad at tactics games, never played Advanced War but clearly its too advanced for me. Big tank kills me good

Real cool that you got so much done man, music choice a bit too chill for me as I'm getting slaughtered

In a brief retelling of the strange happenings that occurred after the July 25th 2019 Team Fortress 2 update, play as Scout as he fights off the spirit of Ricardo embodying his friend Soldier whose trying desperately to sell him dirty hats at dirt cheap prices!

This is a bullet-hell shooter featuring the theme of Team Fortress 2 that's heavily inspired by the Touhou Project shooter games. The game was originally made in for the 72hr Content Jam hosted by TF2 Maps and later polished for an Itch.io release 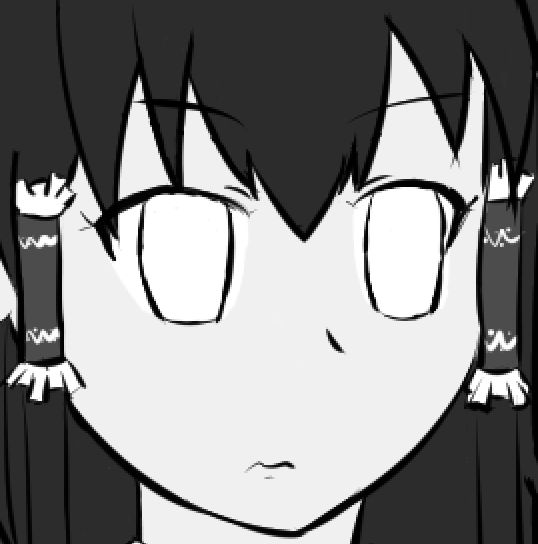