Submitted by gillymew (@gillenewnovo) — 14 days, 9 hours before the deadline
Add to collection 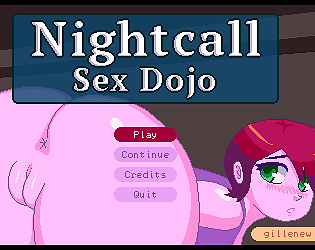 is there a way to download it. sometimes i don't have a good connection at work

Well, for now I didn't compile a desktop executable version, but I could compile in the future :3

That would be super, I have a blast playing it

Nice animations and art style. Wish there was more to do but it's pretty nice and polished. Can't wait for more content.

You animation style is stellar! The gameplay was pretty good too. Basic, but funny. Nice work!

Submitted
Don't Let Me Down
LikeReply
Iron-KSubmitted3 years ago(+2)

I love the graphical style, and the sex animations are great :) It's a shame it's so limited for the jam version (is there a way to get beyond the street outside - for example, into the alleyway and elevator in the screenshots?) - this has the start of an interesting game!

thank you, u can go there buying the two skills o the shop and after by getting 500 SXP. The book is for save your progress on the game, I certainly need to improve the points that were addressed in the feedbacks I received, next month (this month) I will use this game in a new theme, and fix these things :3

Two looks at the screenshots of this game and it should be enough to tell you that its strongest point are definitely the art style and animations and playing the game is enough to confirm that is indeed the case. The background and animations are fluid, diverse and polished enough to get you in the mood.

I also couldn’t get to the elevator part that is shown in the screenshots. Either I missed something, although I did try pretty much everything to my availability to find it out.

Ultimately, if the game was to be expanded and have some more content added to it (like I’ve seen it suggested that it is planned too) I think it will make for a very compelling experience, as the systems are all there for it. I did enjoy this version of the game for the game jam, but again, if it had been pushed just a little bit more, it’d have been fantastic. Cheers! 🐳

Thx, to access the elevator part u need to buy the two skills on the shop and after get 500 SXP. This month (March) I will use to improve this game with a new theme, and fix these things by doing more poses and environment :3

Short, but fun!! I loved the art and music!!

thank you so much, I plan to add more environments and poses soon

btw there is a password to play, and I don’t know the password so i can’t play.

Hey, sorry for that. I'm going to release the public version today :3