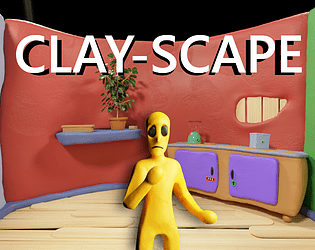 There's just one tiny problem for me, my screen doesn't know where the exit button is, by exit button, i mean when you click on something and try to come out of it, my screen can't see it...But the game is really nice, i could tell when i watched Itsfunneh playng it ^^

good game, the puzzles are just hard enough and the clay aesthetics plus some certain visuals make it hauntingly good

Fr fr this a good game

meh there are better

That was awesome, the enigmas were interesting and the difficulty was perfect (for me)

I made it to the end with a little bit of help because I was really enjoying it and I didn't want to give up completely! The game is really amazing, I love puzzles like these they are really well thought out, the art in pastels is really well complimented with that creepy vibe and weirdness, I wish I could make a scape/puzzle game half as good as this one, well done!

Wow this game freaked the hell outta me, great job!

Puzzles for the most part were challenging but fair (took me embarrasingly long to find the 3 digit code).

(P.S. What is senses dot news, other than a LUDICROUSLY expensive domain name for sale? And what was the direction thingy on the table for?)

This is a unique entry and a fun one at that!

I will admit I am not good at these kinds of games, so I did not get all the way through, but I did still enjoy it. This game’s real shining star is it’s aesthetics using the clay, which ultimately brought you a 5/5 on Aesthetics from me! Congrats!

Otherwise, this overall seems to be pretty solid and entertaining. Great work!

Loved the clay aesthetic and ambience, and great puzzles!

I love the art. The puzzles are quite nice, neither trivial nor impossible.

This game was awesome. The puzzles were clever, and the art style added so much to the atmosphere.

I absolutely agree with everyone else here saying that the visuals are amazing. It's extremely impressive how good everything looks! The game also gave me a sense of eeriness the whole time, like something was off (in a good way of course).

The puzzles were a little too difficult to figure out though. I was able to figure out the first room after some time, but the second room(s) had me completely stumped, until...

(Spoilers) I was actually able to beat the game, but I think I skipped A LOT of the puzzles to get to the end. I figured the game room was a hint to the knight to king puzzle, but I wasn't a chess player so I just brute forced the puzzle lol. That led me to the horse room, which then I used to get the gold key from the skeleton robot. I completely skipped the puzzles involving the codes, the directional button thing, and the computer.

Though despite the sequence breaking, the game was fantastic all the way through! I loved the visuals and the mood they set up. Difficulty aside, the puzzles were really well thought out! Great job on the game overall!

Edit: Also wanted to mention that the horse room was one of my favorite moments. Really got me anxious for the time I was in there.

Great game, loved it and have rated it .Please do try and rate my game too.

This might be one of the most  visually satisfying game I've seen. Nothing throws me off from the whole Claymation thing. Like the lighting is perfect, the clay has fingerprints and the yellow guy's heartbeat animation and that blender animation. Man, I'm so impressed. Loved the puzzle solving too, great game!

If you don't mind me asking...is this the first time you've experimented with the clay aesthetic or you had a blast learning it in this jam?

We'd love to get your feedback on our game, check it out if you have some time!

I've always LOVED claymation and I really love this game. The puzzles are challenging but not frustrating making for a very enjoyable experience. The times I got stuck was only because I was either overthinking it or I just missed something. I love how the horror ramps up! I REALLY want to see more of this! I would pay for a longer version of this. Also quick note, after using the blender I can take out the thing I put in. It's kind of funny to still have it with me on my journey even if it just stays in my inventory.

Submitted
Stranger In The Night
LikeReply
colorbombDeveloper1 year ago(+1)

I am aware of this bug, but I'm debating leaving it in because it's kinda cute :)

SOOOO COOL!!! i love the clay graphics and the puzzles are really well done.

This is insane! Awesome!