Part of the ScoreSpace 18 Game Jam
Submitted by Millibyte Studios — 1 day, 17 hours before the deadline
Add to collection 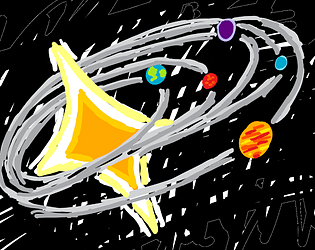 I could keep playing as it was a simple arcade with smooth controls. Unfortunately there is no sound which would have added to the experience. A great game none the less.

A very enjoyable arcade game. The controls are snappy and responsive. The bullets are a bit too small and it's very hard to see them, especially their color. Also, I found the shield polarizing almost useless - it's much easier to just avoid them. But overall, a good jam submission with a lot of replayability.

Nice mechanic on the polarizing shields affecting the enemy bullets.

Enjoyable game! The stars in the background should've been less opaque/bright so they don't compete with the bullets for visual clarity. Bullets in genereal are very smol and hard to see at first. The shield is a nice mechanic, but it found the button a bit awkward to reach. Good job regardless. It's fun!

the polarity shield thing is a cool addition to this game. Some sounds would really help though to give an impact to what's happening on screen.

Cool game, kind of hard to see some elements on the black background and with the sizes. However, was a great concept and well done!

Would've liked it more if it was slightly easier to kill ships, but that's a pretty minor nitpick. Also, the lack of sound effects is unfortunate, although I totally get how things like that can slip through the cracks. Overall very fun and enjoyable game. :)

Feel free to check out and rate my game as well!

Submitted
MAGNET to a GUNFIGHT
LikeReply
JuulHSubmitted152 days ago(+1)

Nice idea!
The addition of being able to actually destroy enemies definitely helps make it a lot more fun.
Some simple sfx would've been nice, the graphics were good!
The idea is pretty cool, it was sometimes a bit hard to see if enemies were shooting red or blue bullets which made it harder to adapt to them, but it was still pretty fun to play.

I ended up burning out the rest of my time learning how to do basic sound design/MIDI. Def something to include next time once I’ve got some experience makin’ bleeps!

Good point on the bullet visibility. They should be more obvious.

dont hesitate to check my game :

A very enjoyable game, found myself wanting to beat everyone else and get near the top of the leaderboard. It was definitely a challenge, and that's exactly what you want on a game like this so great job!

Really nice game! I beat your score with 991 points :DD! It was challenging haha. I really liked the magnetic system on the ship with the polarity flip mechanics. I only missed the possibility of destroying the enemy ships. Keep up!

Your feedback has been received, now with destroyable ships!

Nice game! It was enjoyable to play and I almost managed to beat your highscore. I think I have to try again after some sleep.

The concept fit the theme nicely and flipping the polarity of the ship shield to prevent being hit was fun mechanic. To make the magnetism aspect to be even more involved in the gameplay the magnetic forces could be even higher. Then having blue shield would also attract red bullets which now didn't really feel like the case.

The visuals are also nice. I especially like the player ship with the different shields and moving background stars. There was no audio at least at the time when I was testing this.

One thing that surprised me as a player was that the enemy ships were never destroyed no matter how many bullets I shot at them. I would have liked to be able to destroy the enemy ships to feel that I'm making progress in the game. I think this would make the game much more enjoyable! Now it felt that I was just shooting around and got points all the time.

It was a bit unclear to me does the player ship have any health? Maybe you could consider adding some visuals for that: a HP bar or heart/shield symbols somewhere on the screen to represent how much health the player still has.

Thanks for the feedback! The magnetism could definitely use a tweak, but I’m just glad it works at all!

Updated with some destroyable enemies. Still no sound or player health bar. Might add them post-jam though!

Yeah! It's totally understandable that in a jam game one cannot do everything.

The game was multiple times the fun now when the enemies can be killed! That was definitely really good addition.

It was fun to play! I left you a rating.

Please consider checking out my game as well. I would love to hear your feedback on it.