When a bird comes to your dreams...
Submitted by Prifurin (@PrifurinC) — 13 days, 6 hours before the deadline
Add to collection 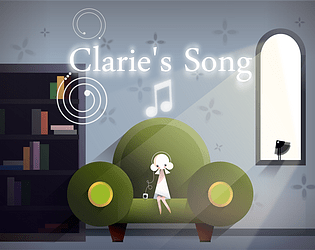 Lovely graphics, interesting game. I included it in my PowerPoint Jam compilation video series, if you’d like to take a look. :)

It seems the player you're using can't perform it properly, sadly, but thank you anyway!

I love the music, the story and the art style. The different puzzles are fun too, it's just a little bit uneasy for me to play the second puzzle of the game because of the colliders... But over all I love the game!

Rapadura is sweet but not soft

Music: The icing on the cake deserves a prize just for that

Art style is gorgeous and the audio is spectacular. The gameplay is a bit tricky though, one of the puzzles just happened so fast that it was impossible for me to pass through. Great narrative storytelling, the genre kinda reminds me of Limbo and Inside, both fantastic games and that ability to use what you have to make a story that makes sense for you is always great. So good job!

Submitted
Under The Influence
LikeReply
Ramon HuiskampSubmitted1 year ago(+1)

Gave it a proper try this time :)
Art style is still beautiful,
Initial puzzle with eyes was nice, but the one with thorns doesn't seem to give me the warnings when I'm near an invisible thorn? Either that or the collision of the thorns is just not very clear. I ended up cheating that one by moving to the end before the slide had loaded ^^'
The one with the arms was, in my opinion, a bit too harsh. I like that it's a bit of a sudden chaotic moment, but there's just too much happening to see where to go. After dying a number of times from it I got frustrated and cheated that one too.
Music puzzle.. I did not understand the logic. After a lot of random clicking I seemed to have gotten it. I just clicked on the instrument and then on the notes, but really didn't see the connection of when they were activated.
The mirrored puzzle is great - once I got it I was quite excited to try getting everything. But.. many places that seemed like (spoiler) they were incorrectly mirrored, or didn't appear on one side but only on the other, were not click-able? That made it feel weird again.. like it wasn't actually a puzzle about seeing what wasn't correctly mirrored?
After clicking more, I managed to click on the ones I previously found, so I assume it's just ordered, and that's why it doesn't work right away? Quite too bad, because that made it much less enjoyable.

Also, the final >> didn't work for me to close the game.

So, finally, after going through all that, I still think it's a gorgeous game. I really like the pacing of the story and how gracious but somewhat disturbing it is. But I really think the gameplay needs work. I realize I may have just missed some things, but I feel like a bigger focus on clarity would really help this, and the mirror puzzle.. why not make everything possible to be clicked? (If you don't know of how to set it up in ppt, I found a way that worked for myself without any coding or such, and can show you if you want to reach out on discord ^^).

My feelings on it are conflicted, but that doesn't take away that it's a tremendous achievement to make such a fantastic looking, feeling, and sounding game in powerpoint. I suppose I'm extra harsh on the gameplay just because everything else is done so damn well :)

The game is overall simplistic and the visuals are strikingly stunning! The way everything is executed and the fact that it is PowerPoint 2007-compatible is quite amazing! Well done Prifurin!

Submitted
Do Not Disturb! - DEMO
LikeReply
PrifurinDeveloper1 year ago(+1)

I love the eerie/misterious feeling to it, reminds me of rusty lake.

Why are you not famous? This is not a game, its art. At the ending i was holding back tears just from how beatiful this experience was. Really i cant tell you to make it better. Hyped for a sequel or more games of this style.

Art style was fantastic. Loved the sound design. Puzzles were... very hard? I wasn't sure if I was on the rights lines, or if the puzzles were just not working as intended on my version of ppt.

I really enjoyed this though. I would have played more levels if they existed :)

quickly checked it out on my phone - it's beautiful! I think the puzzles probably don't work on mobile, so it just advanced as a normal powerpoint ^^' hope to try it on PC when I have time :)