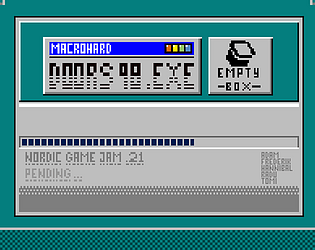 Cool game! I tried this right after the prince game, and I like your implementation of the pending input mechanic better, but I like their story more :)

I couldn't pass the second level and gave up...

Nice work with the art style!

I'm glad you liked the game.

It's a shame you did not get to finish the game though :(

Very cool idea! I feel if you expanded the game with harder levels it could very easily get frustrating because you are playing by instinct. The loading bottom bar broke at some points, too.

Thanks for playing and providing feedback.

That's true. It would've gotten annoying. We planned to visualise the time passing in the input phase, but did not have time to do it. Also the inputs overlay does break a bit too often.

I’ve played bot programming simulation games in that vein! Real-time is much harder though, you cannot just tweak the move duration with numbers (if you’re interested just search joqlepecheur, he makes a lot of puzzle/meta games).

I feel there’s a joke on a failing exit screen that forces you to Alt+F4, but not everybody may appreciate if they don’t know how to do that? Unless there’s another way to close the app? (I was looking for it, but the exit screen was completely stuck, pressing any key didn’t even send me to the main menu - just like in-game where sometimes pressing a key would not start the timer - so I had no choice but to Alt+F4)

Thanks for the game.

You are right, the blue screen is a joke and the game was meant to not have an exit button, but we're not sure many people got that joke. Also the press any key prompt only allows you to press a key that is used in the input of the game (A,D,SPACE,SHIFT).

Oh, you’re right, I tried ENTER but not SPACE. I tested it again and it’s working. I guess you could just handle any key and exit the game (as if it crashed) when you detect any press.

<3 the win 98 art and soundtrack. Initially I had some trouble with the input but I figured it out after a while.

We're happy you enjoyed the aesthetics. We could've worked a bit more on the visualization of the input, but in the end we barely had enough time to build this version.

Cool idea for a game mechanic, and you guys really nailed the win98 aesthetic. (:

Thnak you. We're happy you liked the aesthetic we were shooting for :)

Cool revamp of win98 as a style. Puzzle style solving is nice!

Thanks. The way we described it is Rage Platformer, but I guess it also fits in the puzzle category.

We tried to make the CRT shader as unnauseous as possible, but in the end, we should've made a button that toggles it.

I think this is my favourite game from this jam so far! I really like the puzzle aspect, and the artstyle was amazing :-D

We're so happy to hear that :)
Frederik and Hannibal really outdid themselves with the art and music this time.

Thank you. We're glad you liked it :)

I see others got inspired by pending input as well :D

I really love the visual style of the game and the music!

It is a fun idea to explore, for sure :D

Glad you liked it. Thanks for giving it a try :)

Fun idea for a game and a really nice style to it. I found it to be a little hard to get a sense of when to input commands, but it's a really cool concept!

I'm really happy that you enjoyed the game :)

We forgot to add the indicator for time passing when you input your commands unfortunately :(