Shake your ass dancing in a Thai bar as Van Damme in Kickboxer and show them your Thailand! #MovieGameJam minigame.
Submitted by Anarkade (@Anarkade) — 3 hours, 22 minutes before the deadline
Add to collection 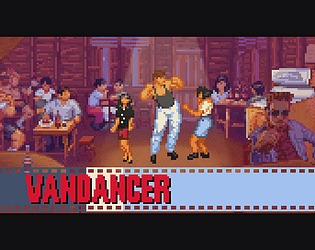 Does your game or video link contain movie spoilers?

Please list any pre-made art/music/other assets that you used.
None, everything has been built from scratch for the gamejam

Anything you want to say to players before they play?
Press the required button presses/ arrow keys when over the white box and show them your Thailand! :)

Nice graphics, well made games. I included it in my Movie Game Jam compilation video series, if you’d like to check it out! :)

Thanks for the video and the nice words, Jupiter! <3 We take note of the feedback. We'll add new animations for the characters and include enemies attacking you soon to make it less repetitive. In addition to continue working on the background animation and increase the difficulty a bit.

Good job! I love this dancing games! Fits the movie very well. Some feedback here: the song ends when inputs are still coming. It'd be nice making Van Damme dance only when the correct inputs are being selected. And finally: I missed some sort of feedback when buttons are pressed. For example, a cool voice shouting: AWESOME!! COOL! OKEY

Once the voting period ends we'll start updating it with different improvements, like a better & animated background asset, improved synchronization, extra animations for the different key presses or when bad dudes appears to fight. I didn't want to include audio feedback for presses because since they are frequent they'd would overlap the music with too repetitive and intrusive sounds. And well, I didn't have resources to do that audio :) In any case I'll investigate how real, proper music games address this audio feedback. Thanks for the feedback, I'll take note.

10/10 I can see a van jam game jam someday. It was so good. I wanted to save it for the end because I stalked this game on twitter during the Jam. I think you should add a difficulty with more moves in time with the music. The best part of my stream is the music is so low it didn't come through HAHAHA I will have to replay it again.

Thanks for the video and the nice words, TigerJ! :) Starting tomorrow, once the voting period ends, I'll continue updating the game with additional fixes and improvements. The first update to be published tomorrow fixes the synchronization, another of the issues you mentioned, and adds a still not complete but way better and animated background. I want to do other things before, but I'll address the difficulty in the near future too.

I'm actually haven't played many rhythm games before, so my feedback below can be a bit misleading, but anyway..

During the play I found that my eyes are constantly fixed to the moving strip at the bottom, while my inner film buff wanted to watch vandancer moves.
I didn't feel any sync with my input and dance moves, should't they be correlating in someway? Like I missed a music bit, and dancer lagged behind or something.
I wish the dance would smoothly transition into a bar fight. Enemies could come from left and right, I would press <- and -> to punch them, down arrow to do a famous leg-split and evade hits, up arrow to do a double jump kick, e.t.c This way my eyes would be on the scene and enemies will act as rhytm markers.

Thanks for the feedback, Ukiwuki!  I barely had time to have everything done on time. The characters moves and the correct inputs aren't synched to the music right now, only the early inputs are more or less similar to the track. After the voting we plan to update it including extra animations, a proper background image, tweaked difficulty and synchronization of everything plus attacking bad dudes once you fail or miss a few moves (plus attack 4 moves for all 4 directions that would include both JCVD's signature split and 360 cresent kick).

Only things I could say, is that for the windows variant you should put a way to quit the game. That and it would be nice if you also allowed use of the WASD keys.

Thanks for the feedback. I though that the standard ALT+F4 and the X button in the top right corner was enough to exit the game. Do you have any specific suggestion for an additional exit method? I'll take note and implement it with the WASD and other additional improvements and fixes once the voting ends to don't break the rules.

well for me the game started in fullscreen so i didn't have that x. as for the alt+f4 it didn't work for me, however my keyboard has been acting buggy. For exiting the game, a simple menu with a quit game function would, work. However I'm not too famiiluar with the engine you're using. Sense it looks alot like a bigger games mini game. what ever you commonly think of for an action key would do well as an exit button. say press F to exit. there should be a line you can use in most engines code for an exitapplication function. That's what I'd suggest.

Nice pixel animations and music. I've been using Gamemaker for a while now and I've wanted to make a rhythm game for a while even though I don't think GMS has the best audio functions, so kudos for the work here.

I don't know if you were just using room speed but I've never been sure how to tackle these projects in GMS aside from with delta time, else I feel like it's hard to break away from songs that are 120bpm or something else that divides well into the room speed. Even then a dropped frame can spell disaster for timing. I noticed some of the action timing when I was playing was a little off beat so I guess I was curious how you approached this stuff, and whether you'd try a rhythm game in game maker again

otherwise cool work, thanks for the game :)

Thanks for the kind words! Since it was just a minigame for a jam and I am not experienced on Game Maker I didn't want to make it very complicated. For me the priority was to have something running to submit it on time, more than to have something accurate. I just needed a simple, quick, easy to play casual method with a single track: Yes, I move the pads using room_speed as reference. Everyobject that moves left has this code in their Step:

Where the constant INPUTS_PER_SEC is the amount of keys you'd need to press per second to make it perfect, and DISTANCE_BETWEEN_INPUTS is the screen distance (in native resolution) between the pads. I manually tweaked these values, without reading by code data from the song, to make sure that more or less follows the rythm of the music while at the same time you can see enough upcoming inputs. I also wanted to make sure that difficulty was easy enough for non rythm game players, making sure that almost everyone could achieve a perfect score with maybe just a couple of atempts.

In order to make sure if the inputs have been pressed on time, I use colission of the pad with the white box when a key is pressed. If it's fully inside the box, counts as perfect ("Cool!"), if it's only partly inside the white box counts as "good!", if it only collides with the black bar counts as "Miss!" (too late press), and if it only collides with the blue bar I don't do anything to make sure it's easier for players. I'm not experienced with the collisions in Game Maker and I think it has a couple of collision related bugs, but I thought it was decent enough to submit the game.

I didn't know the BPM of the song, but if it was a fixed one that I was able to sync, it would be easy to modify the formula seen above. A general programming trick (not just GM) for precision calculations in games where you traditionally work with small integer numbers: use real numbers instead of integers and if needed use separated numbers for both things or multiply and divide when needed by a big number (like in the case of the art: In GM you use reals as coordinates, and in pixel art you need to use round() to make sure doesn't look ugly, but if you program somewhere where screen coordinates are int you can use screen pixel coordinates x 1000 (or some other random number stored in some constant) for the game logic, and to divide by this number when drawing. By doing this you'll have an accurated way for the logic precision, and at the same time a small number for when drawing allowing smoother movement.

For a future project I want to investigate a bit the music related code in order to extract stuff like the BPM you mention from the track itself.  Not a rythm game, just to coordinate some background stuff with the music. But for many reasons (like a possible Switch port) I think I'll use Unity for that other project.

Ah thanks for the detailed reply! I think you did plenty well for the jam otherwise, especially if it's been part of a learning experience for you with gamemaker, i was just curious about the different approaches for tackling a game like this. I never got as far as considering using actual collisions for the input timing but now that you mention it it makes a lot of sense. i think that part worked well in the end though and i didnt really have a problem with lining up with the boxes, just the boxes lining up with the music that i noticed came out of sync. but you're right its still good that you managed to submit in time and have everything look so polished otherwise, kudos