It appears an intellegent race has appeared on my planet. Let's fix That.
Submitted by Peemard (@realPeemard)
Add to collection 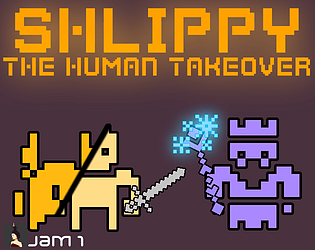 Clever core 2D/3D mechanic. I wish there was more stealth required since you're becoming human, and not like, becoming a 1st-person-monster (which could also work). Combat needed to feel a bit better, more sounds, feels a little more visceral. Cool idea though!

Thanks! The stealth was kinda thrown together in the last 5 hours, and lacks a lot of importance. I knew this when finishing the game but just kept it as is. Will definitely include SFX and more combat features later. Thanks for dropping a review!

The game is very well done.The unique mechanic can be expanded upon aswell.I still dont get why it was 230 mb since it was a pretty small game.Overall Good Job :)

Hi, thanks for having fun with my game. Unfortunately I was unable to build a release configured copy of my game, meaning most of the unused libraries, binaries, and content were still packaged in alongside the main game. After the jam I will release a copy taking up around 10% of the space and that will perform slightly better on low end hardware. I appreciate the positive review!

I think the idea to switch between 2d and 3d has alot of potential. I think the fights could need some more polish to make them more interesting. Otherwise great game.

i wonder what did you make with 120 mb

The shifting was really clever!  Those pesky humans are always up to no good.  XD

SUPER CREATIVE AND INTERESTING MECHANIC! Played on stream and very much enjoyed it. Very short but has potential to be developed further and has a neat base concept and art direction with the 2D/3D shifting

Thanks! I’ll make sure to try out your game too!

With more time in hand I'm pretty sure that this can become a longer game with more depth and ramifications. The attack felt really responsive.

Some things I would consider improving:

Sometimes the enemies are the same color that the background and it's difficult to notice them.

There are some 1 cell wide corridors that i couldn't get into.

Thanks for the positive review! I was planning on adding a border around enemies but simply ran out of time, so that would be brought into consideration for a post-jam build if I make one. The collision is pretty simple to fix, just when the collision size is the exact same as the gap it decides to collide anyways. Thanks again for the feedback!

Great work! I like how you weave'd a theme / story to the 2d/3d mechanic (being an alien and being a human)

After a few failures, I realized I could just unequip my sword and run to the king and just beat him. I also got a better feel for how much range the sword had.

The knockback and effects when you hit an enemy also felt nice.

Overall, fantastic work, especially considering that its for a jam. Cheers!

Submitted
The Most Dangerous Game
LikeReply
PeemardDeveloper2 years ago

Thanks for the feedback! I was planning on animating a preparation/windup animation for attacks, but I realised pretty late in development that I only had a few hours left to work and started scrapping ideas left and right. The gems were planned to be used as a currency at a human shop if you were disguised, but was also cut for the same reasons. During development I struggled to give the 2D perspective a real purpose, and interactions were the only feature I could think of that could be exclusive. Thanks again!