Assassinate the enemy Queen Ant
Submitted by ZerkyWerky — 33 minutes, 46 seconds before the deadline
Add to collection 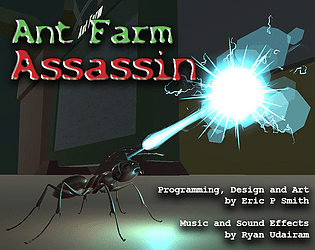 Use of the limitation
Your are an ant assassin.

Billy leans over his ant farm. He's had it for just over a month - since his birthday, and something is already wrong. There are way fewer ants than he remembers, and where did all the larvae go? He drops some more food in. Maybe he hasn't been feeding them right?

It would only be another week before the farm dies out completely. The ant queen still lying in the corner of her chamber.  One precise, charred hole through her head.

Far off In a dark room, the Ant Assassin collects payment for the hit. Someone had to do it. After all, rogue colonies are against the code. Strapped into the laser harness, the Assassin skitters off towards its next target.

haha I love it!  Thanks!

Great fun once i found the farm love the laser helmet

î  on the  dresser at the foot of the bed.

Fun game. My only complaint is that It is very hard to find the ant colony. I would love to see a full version of this game on steam.

Thanks!  I just didn't have the time to make some kind of hint so I started the game with the ant looking at the ant farm.

Exploring an ant colony from the inside looks very cool and the ant models are spot on. The climbing could use some polish but adds a lot to the feeling of being an ant.  But getting to the farm takes way to long  and you dont have anything to do while getting there.

I was planning on having a human child wandering the room with something like a can of spray but didnt have the time.

Cool Game, But A Little Confusing ;)

Submitted
Up The Water Spout
LikeReply
ZerkyWerkyDeveloper157 days ago

What exactly, was confusing?

I Don't Have A Clue On Where To Go

Looks great and I enjoyed how you could climb the walls. Took forever for me to find the ant farm was. Some more sound effects would have really tied the game together as well.

Thanks!  My audio guy had the time to make more sound effects, I just didn't have the time to implement them all.

A very complex game with wide mechanics! To do this in 72 hours is really impressive. I'm interested to see what you could make of this game if you had more time :)