What a lovely little Tower Defense :)

Played it with a friend and had a lot of fun!

This felt very well-made, great atmosphere as well as good-looking. Would have like to see a bit more oomph in the guns as well as the enemies reacting to you hurting them. Pretty impressed what you managed to do during such short time.

Satisfying game with great graphics! Was a bit hard to tell when I took damage though. Add some delays in the waves and upgrades to the pumpkin and you'll have a pretty solid game.

Thank you for the comment and the feedback! I never thought of the corner-tactic when making the game, that's a thing to fix if I keep working on this. Happy you enjoyed the sounds, had fun time making them. :)

Great looking game! It also follows the theme very nicely. Even though I enjoyed the blood-curling screams when clicking the buttons it did get a bit tiresome after a while, I guess that's the moment to stop as there didn't seem to really be an end to the game.

What a great experience!

Cute game! Really nice pixel art. You set the mood nicely with the music as well. :) 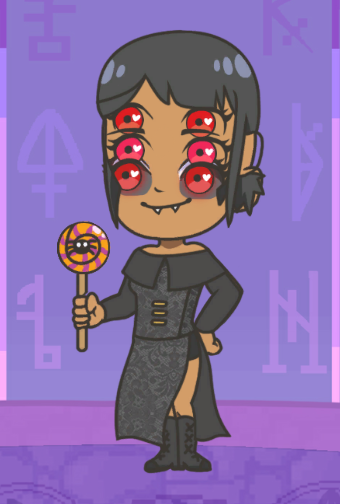 This was a good looking game as well as really fun. It kept me engaged longer than I thought it would. I did feel it got a tad bit tedious after a while because nothing really changes in the gameplay. I see potential for this to become an amazing game if it's fleshed out a bit more :)

Really solid entry! Great visuals and the audio sets the tone. Love the jokes as well. :)

It was short, but I enjoyed it for what it was. Really liked the boss battle! For a platform game I felt the camera should show more of what's in front of you, was a bit hard to see what obstacles were coming and react to that.

Nice work with the audio, setting a spooky vibe. Great graphics as well. I had problems with the doors, not knowing how to open door at the beginning at first. It made sense after doing it once but it's not a conventional way and the audio when pressing E on it made me think it was locked.
Not sure where the end was either, I did the sacrifice and ran through the house a second time but stopped when I had a door block my way after opening it.

Good amount of stuff in this though which is impressing considering the time limit! :)

Thanks! A reload could improve things, yeah. I also think it's more the enemy AI that could be better/more difficult, I wanted to give the enemies more states than what it turned out to be.

Thank you! I did have bigger plans for this jam to have at least 4 different enemies for each room but that was a bit too much to get done in time.

Simple but effective puzzle game that made me actually need to think, and I felt good about solving the puzzles. Can agree with that the difficulty could have been scaled better because I couldn't pass the 2nd level, it did make me want to keep on trying tho which is a good sign. I do see potential for it to maybe become a full game if you decide to keep working on it :)

Maybe I did finish it then? After I went to the house in the most bottom right all I could see was a single house I couldn't click on. Assumed that wasn't the end because of no end screen or anything that felt like it concluded the story.

Great art in this game! You've built up a really good spooky feeling with the sound as well. I went to all the houses but couldn't proceed after that. Not sure if it's a bug or I took a wrong turn somewhere in the story.

Good graphics and atmosphere in this game! It was very short though.

Thank you! Good suggestion! We did get a bunch of ideas on how to continue developing this after finishing the jam. As you, we also thought it turned out to be a pretty fun concept with a lot of possibilities. :)

Enjoyed this! Reminds me a bit of some old flash game that would entertain me back in the day(which is a good thing). Agree with previous comments that the controls were a bit hard to grasp at first but once I learned those it was fun! :)

I accidentally introduced the infinite-money-bug while designing the UI so sorry for that. I made the sound and art though so thank you, glad you enjoyed it! :)

Whoopsie, that's my fault. Apparently happened when I was designing the UI and accidentally copied a script that shouldn't be there.

I see potential in this game. I struggled a bit with the controls but the concept of the game is very nice and I think you should continue to work on this :)

Great arcade game! Quite difficult but it made me want to retry multiple times. Very nice art, audio and controls which makes it enjoyable :)

Thank you! Yeah, that would have been good perhaps :)

Thank you for your nice compliments! :D

This was a creative take on the theme! Fun to see the conversation come out of the randomness of the bounces, made me try it a couple of times to see the different outcomes.

This was an excellent entry to the jam, great art and sound. Fun gameplay that would fit very nice on a touch screen. Only complaint is that I thought the sensitivity for flinging the fish was a bit low, had to drag the mouse quite a bit to get the effect I wanted.

This was nice. Enjoyable gameplay loop that makes you want to explore deeper. The water looks pretty good too for the PICO-8 limitations.

Thanks for your feedback! You aim to the left or right depending on which direction you're moving. I was thinking of having some indicator that would show it but felt it was a bit difficult to do it nicely within the resolution limits.

About the ground collision. I didn't want to have the collision exactly on the ground as I didn't think it would feel "bubbley" enough(whatever that even means). The collision is actually below the ground tile and I made it so it will bounce you back if you go below it. Wanted to give the player a bigger area to move around in as well because of how the bubble-shot moves. I didn't know about that function though, so thanks for that! Might try that out next time I make something in PICO-8. :D

Relaxing game. I'm impressed you managed to build such nice 3D world during the jam. I was a bit bothered by the speed of the bubble though which felt a bit slow. Some kind of burst of speed where you use your limited air could have been fun.

Thanks! I had some ideas to stop the bubble-spam but didn't have the time to implement it in a fun way.

Thanks! Good feedback! I did have a thought of having sharks try and pop you but I didn't want to spend too much time on the game so I canned that idea.

Happy you enjoyed it! :D